The single-panel cartoon depicts Gollum—the loathsome, gargoyle-like creature from J.R.R. Tolkien’s The Lord of the Rings—squatting in front of the counter at a “We buy gold” store as the proprietor peers through a loupe at an infamous piece of jewelry. “Oh, yes. Definitely a forgery,” says the caption. “Hope it didn’t cost you much.” 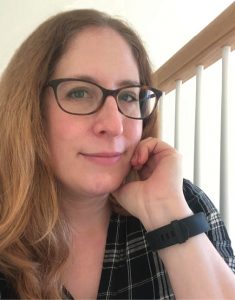 Solomon penned a comic strip in the Daily Sun for nearly her entire time on the Hill. Provided

The witty work, which ran in the New Yorker in fall 2018, marked the debut of cartoonist Ali Solomon ’01 in the magazine—and in her field’s major leagues. Familiar to Big Red grads from the late Nineties and early Aughts for a long-running strip in the Daily Sun, Solomon is a prolific cartoonist and humor writer who balances those efforts with a longtime day job teaching art in a Manhattan public middle school. “It was really, really exciting—I lost my mind,” Solomon says with a laugh, recalling what it was like to see her cartoon in the magazine’s august pages after years of submissions. “I bought so many copies of the issue that it pretty much negated what I got paid for it.”

Since then, Solomon has had several more cartoons run in the print magazine and numerous others on the New Yorker’s website, which features a daily humor spot. Some of the online entries are multi-panel and in color, like a roundup of “new uses for the Iron Throne” (from the heyday of “Game of Thrones” in May 2019) that include dentist’s chair, lifeguard station, ski lift, and pointy repository for Edible Arrangements bouquets. Last October, as parents struggled to juggle work and childcare during the pandemic lockdown, she offered a variety of Baby-Sitters Club book covers for the COVID era, such as The Learning Pod at Dawn’s House and Parents and the Tantrum Zoom Calls.

As Solomon observes, the print New Yorker tends to run cartoons that are fairly timeless, while the website allows for more observation of current events. When Governor Andrew Cuomo announced in November that—with COVID numbers again on the rise—the state’s watering holes would have early closing times, Solomon produced a cartoon showing a lonely Humphrey Bogart alone at the Casablanca bar with the caption, “Of all the gin joints in all the towns in all the world, she walks into mine after 10 p.m.” In early September, in the midst of a vitriolic campaign season, she created a poignant, captionless homage to Charlotte’s Web (by fellow Cornellian E.B. White 1921): as the pig Wilbur looks on, the titular spider weaves the words “PLEASE VOTE.” “It resonated with a lot of people, because everyone was very stirred up about the election,” Solomon says of the reaction to the cartoon. “But then there was a ton of people who automatically interpreted how I wanted them to vote, that it was liberal propaganda—and I wasn’t really saying that.” 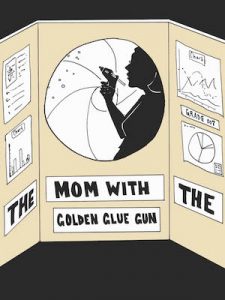 In addition to the New Yorker, Solomon is a frequent contributor to the venerable online literary humor magazine McSweeney’s Internet Tendency, where her work has included topical comic essays like, “Hello, I’m The Internet, and You’re Parenting All Wrong.” She has also published cartoons on the site, such as a sampling of “James Bond films for parents”: A View to a Spill; The Mom with the Golden Glue Gun; PinkEye. (It’s something of a companion piece to a cartoon she did for the New Yorker site on “Hitchcock films for city dwellers,” which included The Rats and The Next-Door Neighbor Who Knew Too Much.)

A Long Island native, Solomon has been cartooning since childhood; she taught herself to draw by copying Garfield and Calvin and Hobbes. She published cartoons in her high school newspaper and, as a communication major in CALS, started a multi-panel comic strip in the Sun partway through her first semester on the Hill—running it more or less every day the paper came out until she graduated. Dubbed The Living End, it featured a regular cast of characters navigating student life: studying, dating, making friends, finding off-campus housing, pledging a fraternity. “When I first started it, it was ‘a joke a day,’ but later it became more serial, with longer storylines,” recalls Solomon, who lives in Queens with her husband and two young daughters. “Some of it was based on things that were happening to me at the time and some of it was just nonsense that I made up.”

After graduation Solomon earned a master’s in teaching at Columbia and began a career in education while pursuing cartooning on the side. Her work has included designing greeting cards for an online company and creating illustrations for the Menagerie trilogy of young adult fantasy novels. This summer, an imprint of Hachette is publishing I Am “Why Do I Need Venmo?” Years Old: Adventures in Aging, an illustrated humor book based on a piece she and a collaborator did for McSweeney’s that was among the site’s most read articles of 2019. It contemplates various absurdist life stages, like: “I am ‘super into dogs and clogs’ years old,” “I am ‘excited about composting’ years old,” and “I am ‘hurt myself putting on pants’ years old.” 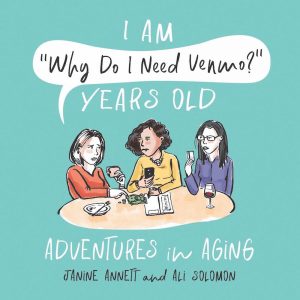 Since the coronavirus pandemic struck the U.S. last winter, Solomon’s work has occasionally touched on it—not only in the online New Yorker but other venues such as Wired, which in late March ran her cartoon depicting a worker in a computer repair shop telling a customer, “I’ve tried rebooting it several times, but the news is still terrible.” But she draws a distinction between joking about the disease itself—something that feels out of bounds to her—and poking fun at how it has changed daily life in ways large and small. “I don’t think there’s ever been a time when people didn’t need humor,” Solomon observes. “Regardless of national tragedies, there are always personal ones. Humor is a way of making sense of the crazy world we live in.”

One thought on “Comic Relief”