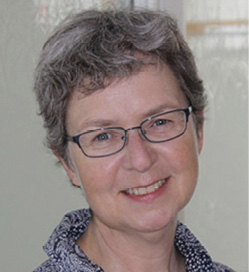 The coronavirus pandemic may have kept people around the world at home for much of the past year, but grounded flights and canceled commutes seem to have had little impact on the trajectory of climate change. In November, the United Nations’ World Meteorological Organization announced that atmospheric greenhouse gases had reached record levels. Reversing that trend will require dramatically reducing the global dependence on fossil fuels while rapidly scaling up renewable energy—and according to a Cornell researcher who’s an international authority in the field, wind power will play an essential role. “Wind has become the least expensive option for generating electricity, even compared to coal,” says Rebecca Barthelmie, a professor of mechanical and aerospace engineering. “Wind energy technology is really amazing, when you think about it. We can actually impact the magnitude of climate change. By employing wind on fairly large scales, we can buy more time.”

Wind turbines generate energy without any pollution or greenhouse emissions, and they have a capacity factor (a measure of reliability) about 40 percent greater than solar power. But for wind to realize its true potential, sites need to be carefully selected and turbines arranged for maximum efficiency. That’s where Barthelmie comes in. An author on more than 150 journal articles and the former co-chief editor of Wind Energy, she is a leading researcher in the field—one whose presence on the Hill “puts Cornell at the forefront of this important renewable energy,” says longtime collaborator Sara Pryor, a professor of earth and atmospheric sciences in CALS.

The focus of Barthelmie’s research is on measuring and modeling the air that moves through and past a wind turbine—known as the wake—to help developers minimize energy loss. In May, she and Pryor began work on a major new study, funded by the National Offshore Wind Research and Development Consortium, to optimize spacing of turbines at sixteen locations in the Atlantic Ocean—a total of 1.7 million acres between the coasts of Massachusetts and North Carolina—leased to developers by the federalBureau of Ocean Energy Management. “This project will bring cheap, clean electricity to the East Coast, where the major markets are—and it’s really exciting from a research perspective,” Barthelmie says. “Broadly, we know how wakes work, but in the details, there are so many factors.”

To understand wakes, it can help to picture a single turbine, its massive blades—each hundreds of feet long—turning rapidly as air moves over them. The turbine converts some of the energy contained in that air to electricity, which passes into the grid. But that means the air that has moved through the turbine has lost some of its energy. If turbines are arranged in a group, one that sits downwind of another—that is, in the first turbine’s wake—will be able to gather less energy than it would if it were on its own. If multiple turbines are involved, the effect can extend as far as twenty miles. “When there are hundreds of wind turbines in very large wind farms, wake effects can be really large,” Barthelmie says. “We know that current wake losses from offshore wind farms are probably around 10 percent, so getting that spacing right is really important.”

And when you add in other elements—like wind speed, turbulence, temperature, and varying tower heights and blade lengths—modeling wakes accurately can become quite complex. This year, Barthelmie, Pryor, and their team hope to begin collecting data on atmospheric movement using long-range LIDAR (light detection and ranging) sensors mounted at various locations including islands and offshore platforms. The researchers ultimately aim to assemble a clear picture of the entire proposed development site, which they will use to model possible turbine arrangements.

Pryor notes that while wind is already a cheap and efficient source of green power, there’s still plenty of room for improvement. A better understanding of wakes—which will allow for the development of more efficient systems—will further reduce costs, making wind irresistible to utility companies and policymakers. “That’s good for everyone,” she says. “It means cleaner and cheaper electricity that can drive our economy.”

In 2019, a little more than 7 percent of U.S. electricity was generated by wind, but that capacity is growing rapidly: according to the DOE, wind may provide as much as 20 percent of our power by 2030—and by 2050, it could account for more than a third. Still, while turbines are an increasingly common sight in the U.S., with hundreds across Upstate New York alone, offshore projects—which ultimately hold greater potential than terrestrial turbines because of faster wind speeds and reduced turbulence—remain rare. So far the country’s only operational utility-scale development is Block Island Wind, a five-turbine array off the coast of Rhode Island that began generating power in 2016. (Another two turbines, the pilot version of a larger project scheduled for completion in 2024, went up last year off Virginia Beach.) Previous efforts to build offshore wind farms have run up against obstacles ranging from powerful coastal landowners who decry the impact on their ocean views to concerns about how turbines might affect marine life and commercial fishing operations. While the climate for offshore projects seems to be growing more favorable, land-based turbines are still, politically and logistically, easier to build.

Offshore wind has caught on much faster in Europe, however, and Barthelmie, a native of the United Kingdom, has been involved since its beginning. She spent many years in Denmark—still “the center of wind energy,” she says—and worked on the world’s first offshore wind farm, which began operating there in 1991. After serving on the faculty at Danish Technical University and the University of Edinburgh in Scotland, she came to the U.S., first to Indiana University and then, in 2014, to Cornell. More than three decades of experience on the front lines of renewable energy have left her relatively optimistic about our ability to stave off worst-case climate change scenarios, although she acknowledges that given the stakes, progress—often impeded by politics—can seem
frustratingly slow.

Still, once operational, wind farms usually prove to be popular, and Barthelmie argues that the industry’s momentum is now unstoppable. “Wind is good for our economy,” she says. “It creates thousands of clean energy jobs. I don’t understand why there’s been any reluctance to shift to this technology, because we have so much to gain.”