Richardson has written numerous essays and appeared in a variety of media.Gary Hodges

When nine Black churchgoers were murdered in South Carolina in June 2015, it gave new urgency to an ongoing battle in the culture wars: whether the Confederate flag—which the killer had fetishized, and which the state still flew over its capitol—should be considered not a benign relic of Southern heritage but a hateful symbol of white supremacy. As that debate was raging, the New York Times opinion section invited Cornell professor Riché Richardson to weigh in on what other symbols should go on the ash heap of history.

Her choice: Aunt Jemima. The logo of the familiar brand of pancake mix and syrup, she wrote, “was an outgrowth of Old South plantation nostalgia and romance grounded in an idea about the ‘mammy,’ a devoted and submissive servant who eagerly nurtured the children of her white master and mistress while neglecting her own.”

Almost five years to the day after Richardson published that Times essay, her wish came true; amid this summer’s widespread protests against racism and police brutality, brand owner Quaker Oats announced it would soon retire the logo and change the name. Among the thought leaders tapped to comment on the decision was Richardson, who spoke to NBC News via videoconference. “Children going with their parents to the grocery store are still seeing this retrograde image of Black womanhood on store shelves,” Richardson lamented, adding that Aunt Jemima is “premised on this idea of Black inferiority and otherness.”

An associate professor of African American literature at Cornell’s Africana Studies and Research Center, Richardson is a scholar, author, and artist whose wide-ranging interests include Southern culture and its role in shaping Black identity and fomenting racism. In her first book, Black Masculinity and the U.S. South: From Uncle Tom to Gangsta, published by University of Georgia Press in 2007, she parsed negative and positive stereotypes of African American manhood, exploring such topics as the films of Spike Lee, the political rhetoric of Malcolm X, and discourse around the O.J. Simpson case. In December, Duke University Press is publishing her second: Emancipation’s Daughters: Re-Imagining Black Femininity and the National Body, in which she examines how women such as civil rights icon Rosa Parks, former First Lady Michelle Obama, and former Secretary of State Condoleezza Rice have challenged white-centered definitions of American identity. The two books, she says, form a set “that interrogates Blackness and the impact of geography in shaping identity, and larger questions of gender and sexuality. In the first book I kind of took the low road and looked at stereotypes; this one takes the high road. Aunt Jemima is the starting point, but then I look at models of how Black women have challenged those stereotypes and become iconic models of leadership.”

Richardson has also penned dozens of essays, some of which pull in unexpected elements of pop culture—including one, published in Mississippi Quarterly, noting the similarities between Aunt Jemima and another fictional Black pitchwoman, the phone psychic Miss Cleo. In the feminist magazine Labrys, Richardson pondered the case of the “Octomom”—a white woman who had octuplets conceived through in vitro fertilization, despite having six children already and being on public assistance—bringing in such themes as Margaret Atwood’s The Handmaid’s Tale and the tabloid fixation with actress Jennifer Aniston’s pregnancy status.

In fall 2017, Richardson taught a course entitled “Beyoncé Nation”—part of a nascent academic field (with offerings at such institutions as the University of Copenhagen) that taps the pop icon as a window into race and gender issues, the entertainment industry, fashion, and more. Richardson, who devotes the final chapter of her upcoming book to the singer, plans to offer the class again due to popular demand. “It was one of the most exciting teaching experiences I’ve ever had,” she says. “Students from so many different departments enrolled—engineering, ILR, chemistry—and they emerged as a kind of think tank on Beyoncé. The papers they wrote dealt with so many different dimensions: the business and technical sides of her career, feminism, gender, family, the politics of award shows. Who looks forward to reading nearly seventy papers? But with a course like that, you do.”

A native of Montgomery, Alabama, Richardson majored in English at Spelman College and earned a doctorate in American literature at Duke; she spent a decade on the faculty at the University of California, Davis, before coming to Cornell in 2008. In addition to her academic work, Richardson is a respected textile artist who makes mixed-media quilt portraits, with subjects including family members (one piece depicts her aunt being presented at her debutante cotillion in 1976) and prominent historical, literary, and arts figures. “I tend to build my quilts from the inside out,” Richardson observes. “They’re very three-dimensional and have a ‘coming off the page’ effect.”

In January 2009, Richardson went to Paris as a cultural envoy, participating in events at the U.S. ambassador’s residence related to a touring exhibit of American quilts entitled Un Patchwork de Cultures. Her portrait of Rosa Parks—a twist on the activist’s mug shot after her arrest for refusing to give up her seat on a segregated bus—is in the permanent collection of the civil rights icon’s namesake museum in Montgomery. When Nobel laureate Toni Morrison, MA ’55, came to campus in spring 2013, the Africana center had several of Richardson’s pieces on display—including a 2010 portrait of Morrison herself. Richardson, a longtime devotee of the novelist who has taught classes on her work, still vividly remembers a colleague coming into her office and telling her that Morrison had arrived for the event—and was looking at Richardson’s depiction of her. “I had to compose myself and walk down the hall and greet her,” Richardson recalls. “Wow—oh my goodness. It was an incredible moment.” 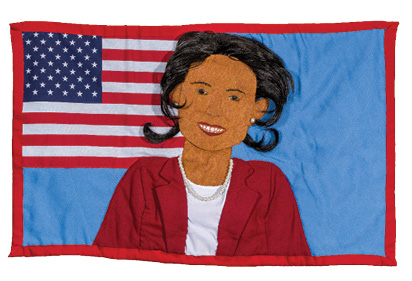 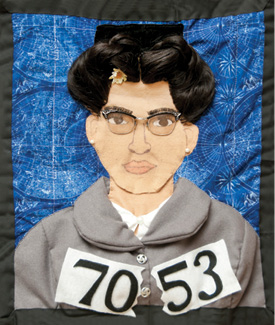