What do textbooks, C-shaped dog treats, Big Red Bear onesies, and carnelian-and-white blankets have in common? They’re just some of the wares available at the Cornell Store, which has been serving East Hill for more than a century. Nestled into the hillside at the top of Libe Slope, the store carries more than 25,000 products—from backpacks to pajamas, laptops to cosmetics, notebooks to winter coats. Offerings include thousands of items adorned with the University’s name, emblem, and mascot: mugs, sweatshirts, watches, umbrellas, wallets, jewelry, wine glasses, neckties, golf balls, stuffed animals, and much more. As store director Fred Piccirilli notes, shoppers can choose from a staggering variety of headgear—including some 120 variations on the baseball cap. The most popular products, like the reusable Big Red shopping bag and the classic red Cornell T-shirt, sell by the tens of thousands each year. 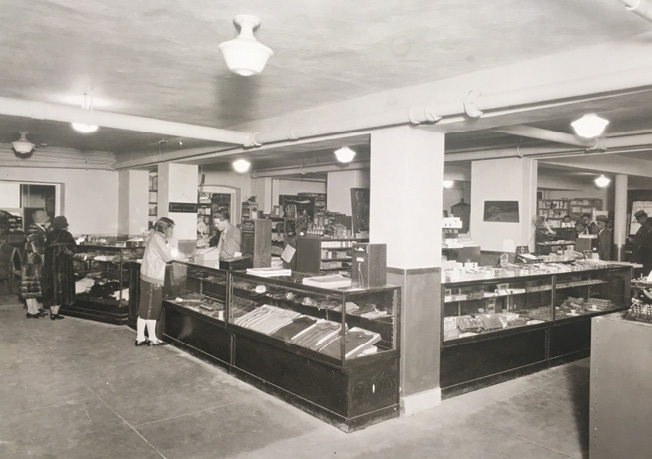 The campus co-op in the basement of Barnes Hall in the Forties.Rare and Manuscript collections

While textbooks comprise about 20 percent of the store’s sales—compared with 40 to 60 percent in decades past—these days its top-selling category is technology, including computers, tablets, and headphones. Over the years, its services have expanded to include a tech-support desk, an express shipping counter, two banks, and Café Jennie, which is run by Cornell Dining and sells coffee, sandwiches, and baked goods. “Cornell is somewhat isolated, and it can be difficult for students and staff to get off campus,” says Shannon Austic, the store’s marketing and communications manager. “We provide the products and services that people need for daily life, all in one location.”

The store traces its roots to a basement room in Morrill Hall, where the Cornell Society co-op operated for thirty years—initially selling from a counter made of wood planks laid across a pair of barrels. Founded in 1895 by students unhappy with the limited selection and high prices of local vendors, the co-op eventually moved into a larger space in the basement of Barnes Hall. By the Sixties, the shop—now owned by the University and called the Cornell Campus Store—had expanded onto Barnes’s first floor, prompting plans for a dedicated facility. “The obvious location was across from Willard Straight in the heart of campus,” reads the official design pamphlet, which goes on to explain that a conventional building in that spot would have “destroyed one of the most pleasant open spaces on the campus and restricted access to one of the finest views of the lake.” So—in a move that seems only natural for a store that had occupied basements for almost seventy years—the University decided to build it underground. The design earned an accolade for progressive architecture in 1969—though escalating costs prevented it from being fully executed, and the finished building (which opened in April 1970) protrudes some twenty feet higher than planned.

Nowadays, the Cornell Store comprises eight shops across campus and beyond, including satellite locations in Sage Hall and the Statler Hotel, at the Ithaca Mall, on the Commons, and at Weill Cornell Medicine in Manhattan. (While the store has organized several pop-up sales at Cornell Tech, a permanent site on the University’s newest campus hasn’t yet been established.) The store also runs the gift shops at the Botanic Gardens—which sells specialty merchandise like gardening books and acorn-shaped pencil erasers—and the Orchards, whose wares include locally sourced apples, cheese, and maple syrup. “I think it’s interesting that even in the beginning we were never referred to as just ‘the bookstore,’ ” Piccirilli observes. “When you look at the number of places we touch within the Cornell community, you realize that we’ve always been much more than that.”