Long before Ezra and Andrew received the land grant that would launch a university, a community thrived above Cayuga’s waters. Now, for the first time in its 155-year history, Cornell is offering a course on the language and culture of that population—the Cayuga Nation—on its campus, which falls within the Native American group’s traditional homeland. “It’s been incredible to teach this language here in this place,” says Jolene Rickard, director of the American Indian and Indigenous Studies Program (AIISP) and one of the course’s co-instructors. “The language has a deep relationship with the region. It has a way of describing how the mist comes over the land at certain times of the day; it has a rich vocabulary for the different seasons and the fruits and animals here. It’s in this richness of detail that we really begin to understand the land as the people who lived here for thousands of years understood it.” 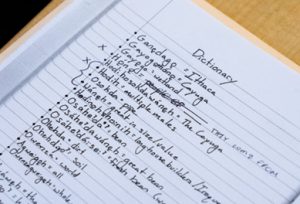 A list of Cayuga words and their English meanings.John Munson

When the course was proposed, a major challenge was finding someone fluent in the language to co-teach it—a particularly tall order since Cayuga is considered critically endangered. Native speakers now number only in the teens, and most live on the Six Nations Reserve in Ontario, Canada, where the Cayuga people relocated after their land was seized following the American Revolution. For generations, the language was passed down orally—it has only been written down relatively recently—but for much of the twentieth century, many indigenous children were placed in boarding schools to force their assimilation into mainstream culture and were deprived of the chance to learn Cayuga.

As it happened, the ideal candidate to co-teach the course was just forty miles up the lake from Ithaca. Steve Henhawk moved to Seneca Falls from Ontario several years ago to teach at a center established to revitalize the language and share the Cayuga Nation’s culture with fellow members who live in the area. A rare fluent Cayuga speaker, Henhawk was raised by his grandparents on the reserve in Canada and learned the language from the last generation to speak it habitually. Now he commutes to East Hill one day a week to teach the course. “Pronunciation is key; you’ve got to sound like my grandma sounded,” he says, reviewing vocabulary with the class on a Friday last fall. “Our language needs to be spoken. It needs a place to live and grow. If it doesn’t have that, this is going to be like a history lesson, and that’s not what this is. Sure, this language is thousands and thousands of years old, but our people are here now. We’re not history.” 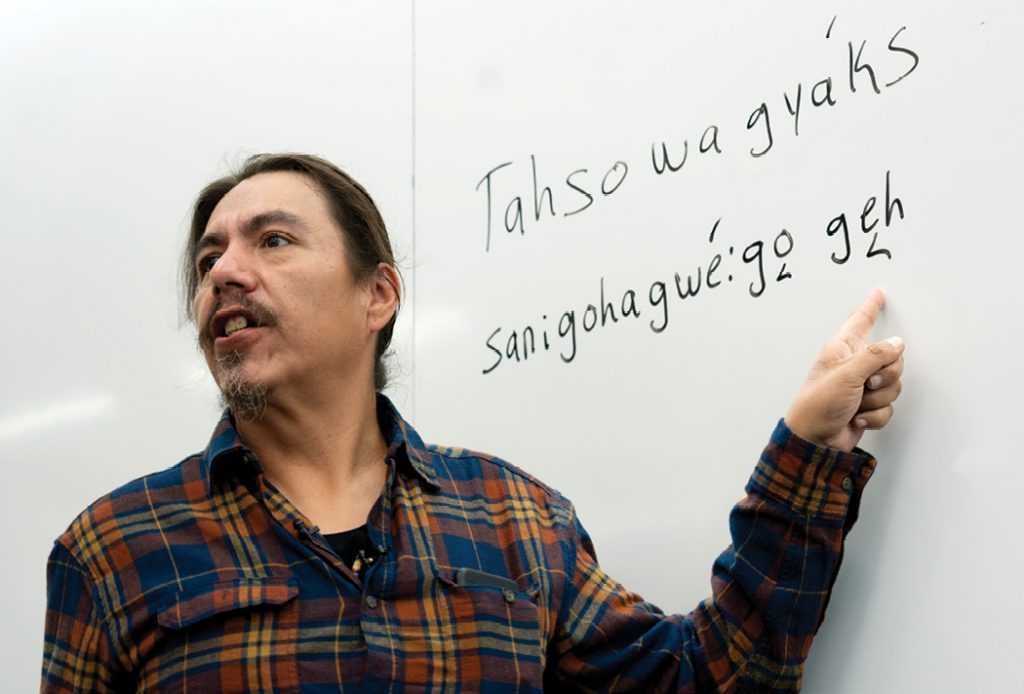 Steve Henhawk, a member of the Cayuga Nation who is fluent in its language, co-teaches the class.John Munson

Cayuga is what linguists call polysynthetic: each word can contain an entire sentence including verb, subject, prefix, and tense. “You can say something like, ‘I will go blueberry picking’ and in Cayuga it will be one word,” says John Whitman, chair of the linguistics department and the course’s third co-instructor. “That actually makes it quite a challenging language to learn.” Technically speaking, the languages of each of the six nations that make up the Haudenosaunee (commonly known as the Iroquois, they also include the Mohawk, Onondaga, Oneida, Seneca, and Tuscarora, of which Rickard is a member) are quite similar. “It’s about the same level of closeness as French and Italian, maybe a little closer,” Whitman explains. “In class, a student will sometimes ask Steve a question in Onondaga and he’ll answer in Cayuga, and they’ll understand each other.”

Taught in both fall and spring semesters, the course explores the way of life of the Cayuga—or Gayogohó:no, which translates to “People of the Great Swamp”—with a particular focus on their relationship with nature. Last fall, that included a field trip to an Onondaga Nation farm south of Syracuse; this spring, the instructors plan to incorporate tapping local maple trees into the curriculum. Jointly offered through the AIISP and the linguistics department, the three-credit course doesn’t satisfy any language requirements—though it does fulfill requirements for cultural analysis in CALS and for global learning in Arts and Sciences. The more than a dozen students enrolled last fall represented a variety of majors including economics, entomology, archaeology, and psychology. “What really struck me is how different the class feels from a traditional western-style academic setting,” says linguistics major Hannah Dahl ’20. “Sometimes we do things that I never thought I would do in a university setting, like pick beans as an exercise in understanding community. I’ll always remember that day.” 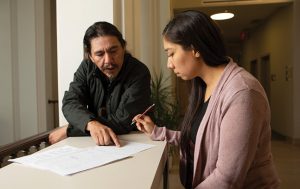 Henhawk with grad student Charlotte Logan, a member of the Mohawk Nation.Robert Barker

During that outing—to the Cornell Botanic Gardens, where Henhawk had planted some traditional crops—he explained the history of various foods and their relationship to the Cayuga Nation. The pigeon bean, he noted, acquired its name because of its resemblance to the egg of a passenger pigeon—which, though now extinct, was once a part of the Haudenosaunee diet. “To hear that story was really important to me,” says Charlotte Logan, a first-year PhD student in linguistics and a member of the Mohawk Nation. “That chain of information is unbroken. It went from generation to generation and made it to Steve and then to me. If it weren’t for this course being offered here, I would have never had that piece of history connected to my own culture—and now I’ll get to teach that to my own children someday.”