If you’re ever off on an intergalactic safari, Matthew Gottesman ’13 can supply the traveling clothes. Futuristic activewear for women was the theme of Gottesman’s designs for the 2013 Cornell Fashion Collective runway show—from a green lamé anorak to a pair of faux-snakeskin shorts to a diaphanous mini-dress that would suit a comely alien from classic “Star Trek.”

Gottesman’s space-age fashions joined a host of other looks—ballet dancers modeling en pointe; young men in fabric-and-wire contraptions that offered a crowd-pleasing peek of derrière—on the runway at the annual event, which draws some 2,500 paying spectators to Barton Hall each spring. For senior design majors, it’s the culmination of a year of effort, not to mention four years of training. “It’s gratifying to go from idea to 3-D—to see your clothing on real people when it’s been in your head for so long,” says Caroline Delson ’13. “That’s when you feel like you’ve made your dream a reality, to put it in a corny way.” But as pleasurable as it is to see their work modeled before an appreciative crowd, she and Gottesman admit to never being quite satisfied. “It’s the designer’s curse,” Delson says. “We can’t separate enough to say, ‘This was good.’ We’re like, ‘Yes—but his shoelace wasn’t tied right.’ ” 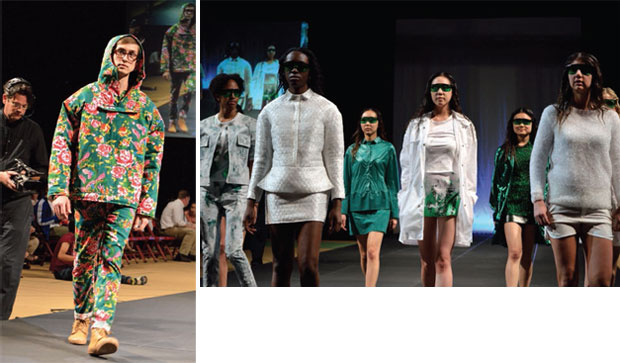 On the catwalk: The 2013 fashion show in Barton Hall featured students modeling designs by Caroline Delson ’13 (left) and Matthew Gottesman ’13 (above).

Delson, who landed a plum job in merchandising at American Eagle after graduation, offered a line of what she calls “feminine-inspired menswear.” It included a boxy take on a motorcycle jacket made of white neoprene, a fabric traditionally used in wetsuits; long button-down shirts reminiscent of caftans; a top made from a quilt her mom discarded; and a floral pants-and-hoodie ensemble in bright green and shocking pink. “What’s cool about this process is that you’re in every role,” says the New York City native. “You are production, casting, makeup, hair, styling, accessories; you’re the designer and the creative director. You name it, we’re doing it.”

The show, which celebrates its thirtieth anniversary in 2014, is open to students from all majors and class years; unlike at many design schools, it isn’t juried or judged. This year, some forty designers showed more than 150 outfits. (The number of fashions each can display varies from one to eleven, depending on the student’s years of membership in the collective.) For seniors, the lines they create comprise a portfolio that can be vital in applying for jobs and internships. Studying fashion 200 miles away from Manhattan has its challenges, after all; it’s not as easy to network, tap industry mentors, or shop for avant garde fabrics. This year, says collective president Susan Freeman ’13, the show was streamed online in the hope of reaching a wider audience. “We’re slowly making progress in getting industry people to watch it and see the design work we’re doing,” she says, “so students can get their names out there.”

Another perennial challenge: recruiting the dozens of models needed for the show, a task that falls to the designers themselves. “We literally run after girls or boys on the street and harass them like maniacs,” Gottesman says. He’s laughing—but not kidding. “We use any means necessary,” adds Delson, who recruited a cadre of tall, “swanlike” young men for her line. “I’ve stalked people on Facebook. I’ve reached out to friends of friends of friends. I’ll run into someone and ask: ‘How tall are you, and what’s your pants size?”