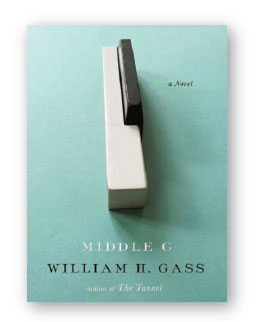 In his latest novel, the author of The Tunnel probes the nature of identity and questions the idea of an essential self. Joseph Skizzen’s father, masquerading as a Jew, brings his family from Austria to England in 1938 to escape the Nazis, only to disappear in London during World War II. The family moves to Ohio, where Joseph learns piano and, using false credentials, becomes a music professor. His obsession with man’s cruelty leads him to collect photos and clippings of atrocities and create a personal Inhumanity Museum in his attic.

Phantom Menace or Looming Danger? By Kathleen M. Vogel (Johns Hopkins). Since the terrorist attack on September 11, 2001, and the anthrax scare that followed, the U.S. military, intelligence services, and policymakers have concentrated on the kinds of biological weapons that might threaten the United States. A professor at Cornell’s Reppy Institute for Peace contends that American analysts have paid too much attention to the availability of dangerous pathogens and technological capabilities. “This narrow focus,” she argues, “neglects other critical social factors that can affect efforts to develop biological weapons by state and nonstate actors in unexpected ways.”

Francis and Eddie by Brad Herzog ’90; illustrated by Zachary Pullen (Why Not Books). In 1913, champion golfers gathered at The Country Club in Brookline, Massachusetts, to compete in the U.S. Open. Francis Ouimet, an unknown twenty-year-old amateur who lived across the street from the course and had taught himself to play by practicing in the backyard cow pasture, joined the players. Ten-year-old Eddie Lowery replaced his regular caddie. In front of a crowd that grew from a handful of spectators to thousands, the unlikely pair defeated the best golfers in the world and became lifelong friends.

My Education by Susan Choi, MFA ’95 (Viking). When Regina Gottlieb begins her graduate program in English she hears stories about the scandalous reputation of Nicholas Brodeur, her handsome seminar professor. Working as his teaching assistant, she ignores the rumors, but also manages to keep him at a distance. But it’s a different matter when she meets his beautiful and charismatic wife, Martha, at a party. The women begin an affair, and Regina’s life soon unravels. In her fourth novel, the winner of the PEN/W. G. Sebald Award examines the corrosive effect of obsessive passion and its inevitable aftermath.

Mexico and American Modernism by Ellen G. Landau, BArch ’69 (Yale). European models were not the only influence on American modernism, argues Landau, a professor of humanities at Case Western Reserve and an expert on Lee Krasner and Jackson Pollock. She investigates the role that Mexican culture and art played in the work of the American artists Philip Guston, Robert Motherwell, Isamu Noguchi, and Pollock, and shows how Mexican muralists Diego Rivera, David Siqueiros, and Jose Clemente Orozco, exiled European surrealists, and leftist activists had a crucial effect on the development of Abstract Expressionism and the New York School.

The Son by Philipp Meyer ’99 (Ecco). In his second novel, the author of American Rust recounts the saga of the McCullough family, from the ruthless patriarch who carves out a ranch in nineteenth-century Texas, to his descendants, whose ambitions—and oil money—transform the family into a rich and powerful dynasty.

The Pretty One by Lucinda Rosenfeld ’91 (Little, Brown). The adult Hellinger sisters— Imperia, Olympia, and Augusta— break out of the childhood roles their mother assigned them and learn to live their own lives.

The Scar Letters by Richard Alther ’62 (Centaur). Rudy Dallmann chose to live in rural isolation after he was the victim of a hate crime twenty years ago. Now Rudy decides to confront his past and come to terms with his attackers and his own fears.

A Broken Thing edited by Emily Rosko, MFA ’03, and Anton Vander Zee (Iowa). In a new anthology, seventy poets explore the significance of the line in poetic form.

Whole by T. Colin Campbell, PhD ’62, with Howard Jacobson (BenBella). “What most of us think of as proper nutrition—isn’t,” says the author of The China Study. In his latest book, he explores the science behind the reasons why a whole-food, plant-based diet is the healthiest way to eat.

Simple by Alan Siegel ’60 and Irene Etzkorn (Twelve). The founder of Siegel+Gale and his co-author show that when companies use clarity, transparency, and empathy to simplify overly complex situations, the results are good for consumers and for business.

The Art of Procrastination by John Perry, PhD ’68 (Workman). Using what he calls structured procrastination—“the art of making this bad trait work for you”—an emeritus professor of philosophy at Stanford discovers that people can accomplish a lot by not doing other things.

The Smartest Kids in the World by Amanda Ripley ’96 (Simon & Schuster). An investigative reporter follows three American teenagers as they spend a year abroad attending top high schools in Finland, South Korea, and Poland. She discovers how these countries have revolutionized their public educational systems in recent decades and asks what it would take for America to educate all its children to high standards.

Designed to Kill by John Forge ’70 (Sprin g – er). A retired professor of history and the philosophy of science at the University of New South Wales—and winner of the Eureka Prize in Research Ethics—makes the case that it is morally wrong to engage in weapons research. He argues that attempts to justify this research are unpersuasive.

Politics in the New Hard Times edited by Miles Kahler & David A. Lake, PhD ’84 (Cornell). Employing a comparative approach, a group of scholars examines the effects of the Great Recession—the worst economic crisis since the Great Depression of the Thirties— and investigates the links between political issues and economic turmoil.

Solomon Northup by David A. Fiske ’76, Clifford W. Brown Jr. ’79, and Rachel Seligman (Praeger). Solomon Northup was a free black man who was kidnapped in 1841 and sold into slavery. After he regained his freedom in 1853, he worked with the Underground Railroad, gave public lectures, and wrote the classic narrative Twelve Years a Slave. Three historical researchers discover new information that documents the full story of Northup’s life.

Gluten-Free Mediterranean Gourmet Cuisine by Aslihan Koruyan Sabanci, GR ’99 (NTV). Drawing upon Turkish and other Mediterranean cuisines, the author presents more than 170 gluten-free recipes and gives advice on food sensitivity and how to support a healthy immune system.

Does Science Need a Global Language? by Scott L. Montgomery, MS ’78 (Chicago). English has become the lingua franca of international science. A consulting geologist and author of Science in Translation investigates the growth of global English and asks whether this is a good thing.

The Law of Kinship by Camille Robcis, PhD ’06 (Cornell). In her first book, an assistant professor of history at Cornell examines how French policymakers have employed the vocabulary of structuralist anthropology and psychoanalysis in debates about sexual differences and the nature of the family.

Everyone at the Table by Ellen Behrstock Sherrat ’01 (Jossey Bass). A senior policy analyst at the American Institutes for Research provides a practical guide for designing better teacher evaluation systems.

Remember Dippy by Shirley Vernick ’83 (Cinco Puntos). When twelve-year-old Johnny discovers he must spend the summer helping his autistic cousin, he thinks his vacation plans are ruined. But then the boys rescue the local jock from drowning and meet a new girl in town, and the summer turns out to be more exciting than Johnny imagined.

Sleeping Beauty’s Daughters by Diane Zahler ’79 (HarperCollins). Princesses Aurora and Luna lead sheltered lives within the walls of a palace by the sea. Despite their parents’ safeguards, an old curse returns. The sisters must travel far to break the spell before Aurora falls into a hundred-year sleep.

Red Thread Sisters by Carol Antoinette Peacock ’70 (Viking). After Wen is adopted by an American family, she vows to find a family for Shu Ling, her best friend at the Chinese orphanage. Wen adjusts to her new life in the U.S., but never forgets the promise she made to her friend.

The Year of the Baby by Andrea Cheng ’79, MS ’84; illustrated by Patrice Barton (Houghton Mifflin). In the sequel to The Year of the Book, Anna’s family adopts a baby girl from China, but the child is sickly. Anna and her friends develop a science project that helps her new sister.

Bittersweet Summer by Anne Warren Smith ’60 (Albert Whitman). Katie and her friend Claire vie to see which of them can get their fourth-grade teacher to marry her father.