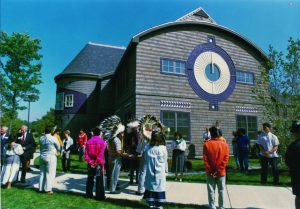 Twenty-five years ago this fall, Cornell became the first university in the U.S. to open a residence hall dedicated to Native American life—a purpose-built, painstakingly designed structure that incorporated myriad symbols into its exterior, interior, and even landscaping. Located at the corner of Triphammer and Jessup roads on North Campus, the house was named Akwe:kon (pronounced “uh-GWAY-go”), which means “all of us” in the Mohawk language. A quarter century later, Akwe:kon is still going strong—a locus of Native American culture, study, and social life that’s open to people of all races and ethnicities. “It’s a living-learning facility more than anything,” says Ansley Jemison, its current residence director and a member of the Seneca Nation Wolf Clan. “A lot of the thought behind it was building a foundation for Native American students to have a place on campus where they could be comfortable in who they are, but also have an opportunity to engage with other students.”

Overseen by the American Indian Program, Akwe:kon houses thirty-five students, roughly half of whom are native. Its many activities range from weekly dinners at nearby RPCC with its faculty fellows to group outings—like a recent trip to the Peabody Essex Museum for an exhibit on native fashion—to hands-on workshops on pottery, moccasins, cornhusk dolls, traditional cooking, and more. “Akwe:kon was vital to my success at Cornell my first two or three years,” says biology major and former RA Fred Blaisdell ’16, a member of the Oneida Nation Bear Clan who lived in the house for three years and is moving back this fall for a final semester to complete his degree. “The thing that really helped was the close-knit community, having that intimate group of friends.”

Akwe:kon’s physical design acknowledges the fact that the University is built on the homeland of the Cayuga Nation, one of the five original members of the Iroquois (Haudenosaunee) Confederacy. The house’s gray shingles represent the bark exterior of a traditional Haudenosaunee longhouse, while the purple shingles and white accents evoke the quahog clam and whelk shells used for wampum beads. “Especially here, it’s important to recognize that the native peoples are still alive; we’re still around,” says four-year resident Heather Williams ’16, an animal science major and member of the Navajo Nation who served as an RA her senior year. “It makes me proud that I got to live there, since it was the first of its kind in the U.S.”

Seen from the air, the house’s outline symbolizes an eagle, while the five second-story windows at its curved front represent the original nations. Inlaid designs on the exterior walls form wampum belts, a non-text-based system of documentation; the brick pattern of a low wall outside the entrance evokes the Two Row Wampum Treaty, a 1613 pact between the Haudenosaunee and the Dutch. Even the large white pine in the parking lot has meaning, representing the tree under which the five nations’ warriors buried their weapons when the confederacy was formed. “For several decades, the University has been committed to recruiting and retaining native students,” notes horticulture professor Jane Mt. Pleasant ’80, MS ’82, former director of the American Indian Program, who is of Tuscarora descent. “They come from communities that are marginalized in all sorts of ways—economic, social, political. They sometimes find the transition to Cornell very difficult, and the house is a safe space for them as they adjust. It’s a place that students often describe as feeling like home.”