Perched on the edge of Fall Creek Gorge is a small but imposing stone building steeped in Big Red history. From the sidewalk, all that can be seen of this miniature fortress—protected by a high fence and a phalanx of security cameras—is a gate and part of a wall; only from the opposite side of the gorge can this unorthodox structure be fully appreciated. Though it has gone by several names, including the Sphinx Head house and simply “The Tomb,” it’s now best known as the former residence and office of late astronomer Carl Sagan. “Like Sagan himself, [the building] was visible and flamboyant—and also remote and unapproachable,” wrote his biographer. “In lieu of a moat, the 200-foot plunge to the gorge acted as a guarantor of privacy.” 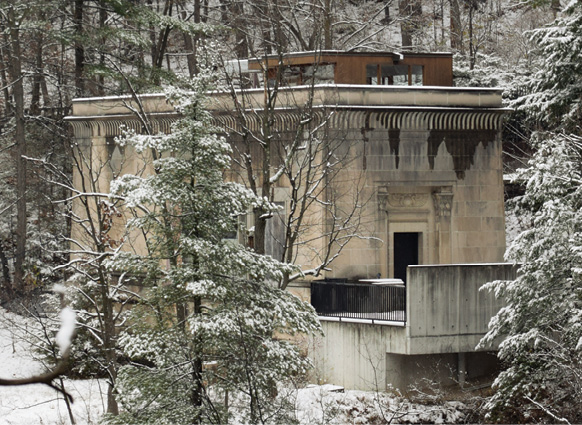 Still owned by Sagan’s widow, award-winning writer and producer Ann Druyan, the 1,200-square-foot structure is located at 900 Stewart Avenue—though it actually sits on a ledge some thirty feet below street level. Due to its famous former residents, dramatic placement, and unusual design, the house has become so iconic it even has its own Wikipedia page. “It almost looks like an alien ship suddenly dropped it off in Ithaca,” muses Marta Wisniewska, a visiting faculty member in Cornell’s architecture department, “without any context at all.”

Last fall, Wisniewska co-taught a course that studied the building; students were then challenged to design their own, incorporating elements from the Sagan house. “It’s anchored in nature, surrounded by trees with a spectacular gorge and waterfall nearby,” Wisniewska says of the property, which is currently assessed at $475,000 on the local tax rolls. “Nature acts as part of the architecture, because it frames the whole building from almost all of its sides.”

Built about a century ago—various historical accounts put the date anywhere from the 1890s to the 1920s—the building was originally the headquarters of Sphinx Head, Cornell’s oldest secret honor society. Designed to evoke an ancient Egyptian tomb, it featured not only blocky limestone walls and carved pillars but a single room, no windows, and only one entrance—the latter inspiring at least one bout of mischief when, in October 1958, members found themselves trapped inside by a padlocked door. (“Through the physical efforts of a football-playing member,” reported the Daily Sun, “the group was freed with a minimum of trouble and delay.”)

The building has since had a handful of owners, each of whom left their mark: installing large windows, adding more doors, and carving out a parking area, among other changes. In 1981—after spending several years in L.A. making the TV series “Cosmos”—Sagan and Druyan returned to Ithaca and purchased the house, in part because it reminded them of the fabled Library of Alexandria, which had been featured in the show. “It seemed like something straight out of ancient Sumeria, or Indiana Jones,” their daughter wrote in New York magazine years later, “but it was not, in either case, something you’d expect to find in Upstate New York.”

The family only lived there a short while before moving to a larger home, and Sagan and Druyan undertook a massive project to convert the house into their offices. The design—which included three skylights, a small second-story space, and pivoting doors that open out over the gorge—was featured in Architectural Digest in 1994. Following Sagan’s death two years later, the building was used as a storage site for his papers until they were moved to the Library of Congress.

Over the decades, numerous local legends about the house have cropped up—with varying degrees of plausibility—including that a secret tunnel connects it to campus. Another oft-told tale involves Alpha Sigma Phi fraternity—whose house, located on the opposite side of gorge, has the only direct view into 900 Stewart. As the story goes, a minor feud broke out between Sagan and the frat, which culminated in the brothers putting up holiday lights spelling out a salty insult to the astronomer in massive, glowing letters. “When a college town’s most famous citizen lives in a stone fortress on a hill,” his biographer observed, “you can expect the fortress and its occupant to figure in the local folklore.”