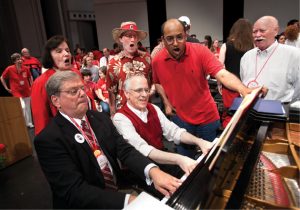 For as long as Cornellians have been traipsing up the Hill, there have been songs celebrating the glories of their school. From the beloved Alma Mater to the lesser-known “Carnelian and White,” melodies have captured campus life. “Cornell songs have an incredible ability to bring people together,” says Robert Shapiro ’04, a former music major who wrote an honor’s thesis on Big Red tunes. “It reminds everybody that they’re all part of something greater than themselves, no matter how different their experiences.”

Some songs are deeply interwoven into Cornell traditions, such as “Give My Regards to Davy”—played at most major sporting events—and the “Evening Song,” performed daily by the chimesmasters and sung at every Reunion. In the early 1900s, a campus-wide competition to compose a Cornell football jingle resulted in “The Big Red Team,” whose lyrics (Where the towers rise o’er the lake / There our fires in the night shall gleam / And the ivied walls shall quake / As we cheer for the Big Red team) coined the term Big Red. From “Faculty” to “Song of the Classes,” there are tunes to celebrate numerous aspects of collegiate life. “It used to be that singing was a much more common thing that people did for fun,” says Corey Earle ’07, a Glee Club alum who taught a popular Cornell history course during his tenure as a staffer for Alumni Affairs. “At all the fraternities and sororities, students would sing Cornell songs together at dinner time.”

A wide range of Cornell tunes remained popular among the student body until the Fifties and Sixties, when communal singing fell out of favor, both on campus and in society at large. Rick Dehmel ’68, BEP ’69, MEng ’71, a founder of the Hangovers and longtime member of the Glee Club, points out that to modern ears, the lyrics of many classic songs are dated and quaint. He cites the first verse of the “Crew Song”: Onward, like a swallow going / Roused is ev’ry nerve and sense / Oh, the wild delight of knowing / ’Tis our pow’r that does the rowing! Says Dehmel: “The students of today might be embarrassed to use that language.”

In more recent years, the dominant Cornell-centric tunes—many of them performed by a cappella groups, with the melodies taken from pop songs—have shifted from praising the University to poking fun at the college experience. Perhaps the most famous is Cayuga’s Waiters’ “We Didn’t Go to Harvard”; based on Billy Joel’s “We Didn’t Start the Fire,” it needles a certain institution in Cambridge (Because it’s not our style, and we don’t wear argyle). Other satirical hits include the Class Notes’ tune “Out on the Arts Quad” (Down the slope on a tray, you best get out of my way) and the Hangovers’ “You Got a C” (Start learning and thinking instead of just drinking). “Cornell songs haven’t necessarily gone out of fashion,” Shapiro says. “They’ve just changed.”