When John “Pierre” Perdrizet, DVM ’81, PhD ’02, graduated from vet school, his mentor and friend, Pro­­fessor Francis Fox, DVM ’45, gave him four gifts: two books, a stethoscope, and a leather medical bag. But upon closer inspection, Perdrizet realized that embedded in that fond gesture was a wry joke. “On each one, either written or engraved, was ‘Property of F. H. Fox,’” Perdrizet says with a laugh. “So for the rest of my career, I’d have to say, ‘No, really, these were gifts. I didn’t steal them.’” 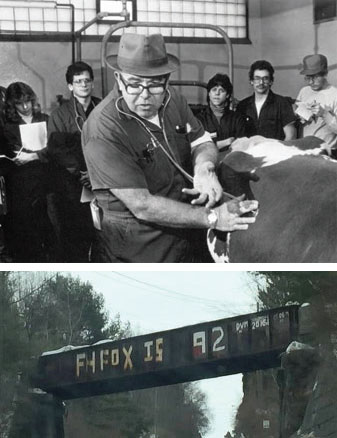 It was classic Fox: affectionate and sly, thoughtful and naughty, a sweet gesture cut with a squirt of lemon. “He had a very prankish nature, and his reputation as a practical joker preceded him,” recalls Jon Bertoldo, DVM ’94. “But he was a gifted person and a kind human being. He had that tough veneer on the outside, but he cared for his students, and he was a consummate professional.”

For more than half a century, Fox—who passed away in March, two days after his ninety-second birthday—was a Cornell veterinary legend. He taught large animal medicine from 1947 to 1992 and remained an active presence on campus—and in local fields and barns—long after he formally retired. “He was one of the greats, a true giant of veterinary medicine, but he was so approachable and down to earth,” says Leslie Appel ’90, DVM ’94. “He was the most genuine, loyal person and friend. He was an educator not just about veterinary medicine, but about life.” Adds Perdrizet, whose nickname Fox bestowed after declaring his last name unpronounceable: “His diagnostic acumen was incredible, and not just in treating animals. He could read you like a book. You couldn’t keep many secrets from Francis Fox.”

Fox’s penchant for pranks was infamous. He’d bring students to examine cows in far-flung fields and leave them there. He’d offer “chocolate” that turned out to be chewing tobacco. And speaking of chew: students who accompanied him on farm calls could have a plug of his Copenhagen . . . but there was a catch. “The law of the land was that you couldn’t spit until the car stopped,” Bertoldo says, “and of course he’d take main thoroughfares that didn’t have any stop signs, and students would be holding their spittle and turning green, and the car would be spinning.” Neither were his nearest and dearest safe from his cheeky sense of humor. “He’d put horseradish in the mashed potatoes,” says daughter Laurinda “Rindy” Fox Garcia ’77. “We had to be very careful if we were sitting next to Dad. When our friends came over, we’d tell them not to eat anything we didn’t try first.”

Thanks to generations of third-year vet students, Fox gained an odd sort of fame in the wider community: every year, on the night before his birthday, an intrepid crew would risk life and limb—not to mention arrest—to paint his age on a disused railway bridge on Route 366 outside campus. It was, in fine Fox fashion, both a show of affection and a gentle way to stick it to a jokester who was a bit touchy about his birthday. “He thought it was retaliation for all the pranks he’d done. But what was he going to do about it? He wasn’t going to go up there and take it off,” Garcia recalls fondly. “But I think he did get a kick out of it, because everybody talked about it. It made him more famous.”

The overpass, while the most enduring and visible jape, was hardly the only prank students pulled on Fox over the years. Many of them centered on his office: they’d fill it with packing peanuts. Or sheep. Some years they moved everything out of it; one year, they moved the dean’s furniture in. “He could dish it out, but he could definitely take it,” Appel says. “He appreciated all the effort people went to. He knew how much he was respected and loved.”