Editor’s Note: In our March/April 2015 issue, we asked whom you would invite to our fantastical alumni reunion dinner if there were another leaf at the table. Here are some of your suggestions:

Edward Bernays 1912—dubbed the “father of public relations” by the New York Times and listed among Life magazine’s “100 most influential Americans of the Twentieth Century.”

Jane Lynch, MFA ’84, for her irreverent sense of humor.

Great party, but how did Bill Pidto ’87 [former ESPN journalist and announcer for the New York Rangers and Knicks] get left off the list?

Your exclusion of Ann Coulter ’84, BA ’85, and any others who may advocate for conservative viewpoints bespeaks of the strangulation of freedom of speech and the fading of open discussion of differing views on campuses today. Only when all viewpoints can be voiced without fear will the critical thought process be allowed to take root in young, developing minds. Agree or not agree with her views, she is far more widely read and more active in the analysis of life and politics here at home and abroad than some around your table.

“Best Sports,” in which we shared CAM’s picks for the Big Red’s top sportsmen and women, received the largest reader response. Here is a selection:

We were disappointed not to find our classmate and friend the late Paul Schimoler ’89 on the list. He has been noted and voted one of the ten greatest lacrosse goalies of all time.

Since there were no women’s teams at Cornell at the time [swimmer] Shelley Mann ’61 and I attended, it seems rather cruel to exclude her. Shelley won Olympic gold and silver medals, and not many people on this list did.

I roomed with Shelley Mann and remember watching her perform at a Cornell swim meet. Her arms went through the water like egg beaters.

Pete Gogolak ’64 at eighteen? As a record setter for Cornell and the NFL and a Hall of Fame selection, he should be in the Top Ten. His skill changed the way the most popular sport in America is played. 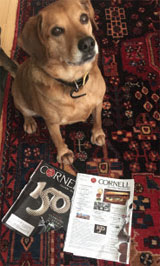 I was surprised not to see basketball player Chuck Rolles ’56 in the top ten. He set a lot of records, and some still stand. Back then, athletes could only play three varsity seasons, and comparing career stats against those allowed to play four years isn’t a true measure.

Eric Gibson ’73 requested a new copy of the March/April issue due to a certain over-enthusiasm on the part of his dog Lolo. He sent us a photo of the evidence (right).