Thirty years ago, when Elizabeth Plowe Ross ’88 penned an essay for the Cornellian about the newfangled Macintosh computer, the boxy gizmos were on the cutting edge. “These computers are a godsend when you have to turn in a ten page paper in a matter of hours and have yet to think of an opening sentence,” the English major observed. “You can type as you compose and if you need to change anything, you may simply ‘cut,’ ‘insert,’ and ‘paste’ text without typing the whole essay over.”

CAM recently ran across Ross’s Mac essay in the 1988 yearbook while doing research for another piece; it seems charmingly quaint in 2018, when most of us carry far more computing power in our back pockets. We reached out to Ross—now a writer and artist in Nashville, Tennessee—to ask her to reminisce about it three decades later. But . . . “I actually don’t remember writing the piece,” she says with a laugh. “I do remember Macs on campus. I remember it was frustrating when you had a paper due, to find a printer that wouldn’t jam.” After rereading it, she says, “It’s funny to see how new they were. Now, they’re such a part of our lives that we’d be lost without them.” 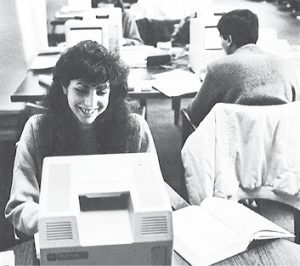 Accompanying the essay—which Ross had been assigned as part of her work on the yearbook staff—was a photo of a young woman using a Mac in Uris Library. The model: chemical engineering major Helen Skolnick ’89. Although the photo comes across as an action shot, Skolnick was actually posing at the behest of a photographer friend, Ken Zirkel ’88. Now a pediatric allergist in New Jersey, she recalls using Macs on campus for her engineering design projects. “It was really hard to get on a computer,” she remembers, “because there weren’t that many.” And while they were generally dependable, she says, “every once in a while you’d get the little bomb on the screen and it would be like, ‘Nooo!’ ” Both alums report that while they’ve used PCs at times over the years, their computing preferences haven’t changed since their student days. “I have a Macbook Pro at home,” says Ross. “I’m an Apple person all the way.”

Life on a Mac

No matter what area of campus you happen to be on when you get a “Mac” attack, you will almost always be able to satisfy your “craving.” Macintosh computers can be found anywhere from Uris Library and Goldwin Smith Hall to Upson Hall and Riley Robb. You will even find three Macs tucked away in the basement of McGraw Hall, and North Campus residents will stumble upon them downstairs at Entrepot.

Of course there is no perfect computer center. Finding a working printer in Uris Library is rare, most of the Macs in McFaddin do not work, playing musical chairs in Martha Van Rensselaer as you are bumped and reassigned a new machine every hour grows tiresome, and the computer room in Goldwin Smith is at least 20 degrees too warm.

Macintosh computers, however, are essential tools to everyone from English majors to electrical engineers. And though just about every student meets some difficulty trying to find a Mac, he does inevitably find one. This is largely due to the University’s realizing the Mac’s importance, and providing more computing facilities than can be found at most any other school.

These computers are a godsend when you have to turn in a ten page paper in a matter of hours and have yet to think of an opening sentence. You can type as you compose and if you need to change anything, you may simply “cut,” “insert,” and “paste” text without typing the whole essay over.

Some Mac programs even include spelling checkers, an indispensable tool at 3:00 in the morning when you don’t have much of a brain left to figure out if “receive” is spelled “i-e” or “e-i.”

Being able to increase the size of the type throughout the document also comes in handy when you find out your ten page paper is only eight pages long.

It pays to establish a good relationship with the user-friendly Macintosh, and with the work load here you’ll probably find you spend just as much time talking with Mac as you do with your other friends.