It sounds like a vintage sci-fi movie: Karst Conquers the Ionosphere!

In the late Fifties, Cornell physicist and astronomer William Gordon, PhD ’53, wanted to study Earth’s upper atmosphere. A mountainous region of northwest Puerto Rico—with a topography of dramatically sloping valleys known as karst—offered a natural setting for a giant dish. And that gave Gordon an idea. 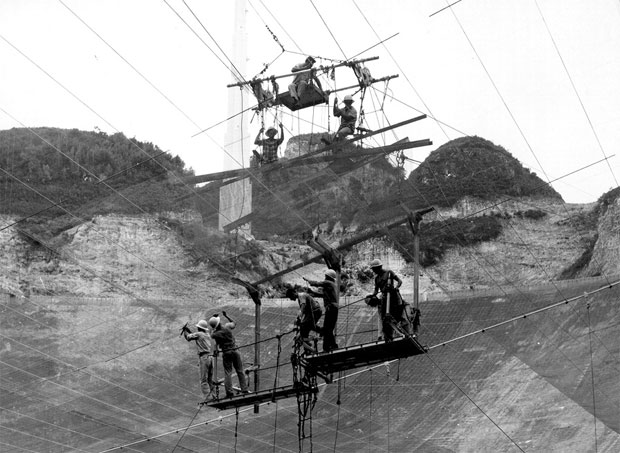 In 1960, construction began on what would become Arecibo Observatory—the world’s largest and most sensitive radio telescope, with a 305-meter-wide dish comprising nearly 39,000 aluminum panels. Although the dish is fixed to the ground, the instruments suspended above it can be reoriented, allowing the telescope to observe some 40 percent of the sky. “It was an enormous technical marvel,” says Joseph Burns, PhD ’66, a professor of theoretical and applied mechanics who specializes in planetary sciences. “Even the way it was put together—by modern standards, it was built in a split second.”

Fifty years ago this month—on November 1, 1963—Arecibo officially opened. In the intervening half-century, it has made countless contributions to science—from studies on the molten core and rotation rate of Mercury to Nobel Prize-winning work on binary pulsars that proved the theory of general relativity. The telescope has tracked asteroids that may threaten Earth and listened for extraterrestrial life as part of the SETI project; in 1974, it broadcast an interstellar greeting to a star cluster 25,000 light years away. “Arecibo has been incredibly important, because it’s the most sensitive radio telescope that’s existed,” says Martha Haynes, the Goldwin Smith Professor of Astronomy. “It’s also a really interesting telescope, because it doesn’t just do passive radio astronomy—detecting signals from pulsars, galaxies, and stars—it also does planetary radar mapping. You transmit a signal from Puerto Rico and bounce it off Saturn’s rings and it comes back; that’s pretty amazing. And it also studies the Earth’s ionosphere. So it’s a multidisciplinary facility—which means that the scientists have to interact and understand each others’ work. That has made it an exciting, dynamic place.” 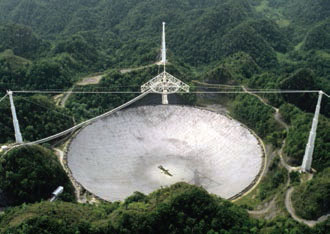 Arecibo is a federal facility, and for most of its existence the National Science Foundation contracted with Cornell to administer it. But in 2011—a few years after the telescope survived a round of funding cuts and avoided being decommissioned—management was transferred to SRI International, a nonprofit research institute. The reasons, Burns says, are complicated—but the fact remains that the leadership of national labs is generally intended to migrate among institutions, and Cornell had Arecibo for nearly half a century. “It was a loss to Cornell for sentimental and loyalty reasons, but the bigger loss was to the observatory and the scientific community,” says Haynes, who’s now analyzing data from a seven-year study using the telescope to inventory gas-bearing galaxies. “People at Cornell have always been responsible for thinking of the next big thing for Arecibo. A lot of revolutionary things—instrumentation and technology, approaches to taking data—were developed by faculty and staff here. Because we’re not so closely tied anymore, that tight connection is gone.”

Arecibo is open to the public, and its visitor center has greeted about half the students in Puerto Rico—making it a vital symbol of scientific achievement and possibility in an economically disadvantaged region. But to get a good look at the dish, you don’t have to fly to San Juan. Just rent the movie version of Carl Sagan’s novel Contact, which was partially shot there. Or for a more fantastical take, screen the 1995 James Bond film GoldenEye. In it, the dish—hidden beneath a lake—serves as the villain’s lair.