Scenes from past parades.

Give My Regards to Davy” echoing off high-rises on a fall evening in Manhattan. Touchdown the Bear boogying at Rockefeller Center. Hundreds of carnelian-clad alumni, sporting light-up necklaces and armed with kazoos.

That’s the scene at the biannual Sy Katz ’31 Parade, when alums of all ages and eras gather in the Big Apple to march, dance, and celebrate Big Red spirit. “It’s a uniquely New York City kind of experience, marching down one lane of Fifth Avenue,” says Jessica Raha ’99, director of regional programs at the Alumni Affairs office in the city. “It’s a hoot. Some other schools have a more buttoned up,serious alumni persona—but that’s not Cornell’s style.” 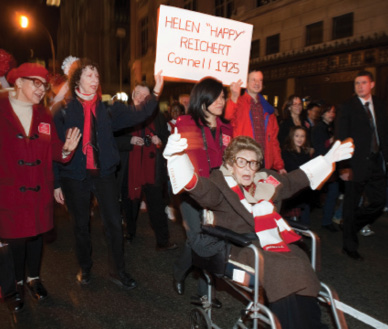 Dubbed “the shortest parade with the longest history,” the event began in 1972, when its namesake created it as an opportunity to showcase and celebrate the Big Red Band. The first parades traveled just one block of East 50th Street; it has grown longer over the years—to the current six blocks or so—and the route has varied from time to time. For a while, the event ended on the steps of St. Patrick’s Cathedral. Then there was the year that the NYPD didn’t show up to block off traffic, so participants just marched around Rockefeller Center. “I don’t think any two parades have been the same,” says Katz’s daughter, Alice Katz Berglas ’66.

Over the last few years, the parade has followed the same general formula: roughly a thousand marchers gather in the vicinity of Rockefeller Center after the Cornell/Columbia football game, follow the band down Fifth Avenue, and finish in front of the Cornell Club on East 44th Street, where the band plays a short concert. Those who don’t want to march can wait for the band’s arrival at the club, which often hosts a post-parade reception. There is even a Little Red Parade for youngsters, complete with their own banner and grand marshal. “My father imagined the parade as a gift, both to the band and to the city,” Berglas says of Katz, who passed away in 1983. “I remember he called me and said, ‘One city block—that’s all I could get. But no other Ivy has its very own parade in New York City.’