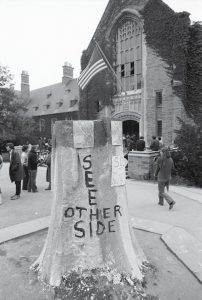 The stump in in its former glory outside the Straight.
Photo: Cornell Daily Sun

It was a six-foot-tall soapbox: the giant tree stump that once stood outside Willard Straight Hall. While it resided there relatively briefly, it served its purpose when the campus arguably needed it most—during the politically and socially tumultuous years of the late Sixties and early Seventies. As the story goes, the Stump spent most of its life as a stately elm tree, one of many that graced East Hill until they were killed off by Dutch elm disease in the Sixties. The Straight elm was cut down along with all the rest, but in this case, groundskeepers left a towering stump, as the Daily Sun later noted, “to pacify students who had bitterly protested the tree’s removal.”

On campus, the Stump became a combination bulletin board, meet-up spot, and social justice icon: students would tack posters to it, paint graffiti on it, and—most dramatically—perch atop it to give political speeches. (In one of the iconic images from the Straight Takeover, Students for a Democratic Society leader David Burak ’67, MFA ’80, stands on it, bullhorn in hand, rallying support for the occupation.) As Elaine Povich ’75 recalled in CAM in 2003: “You never knew a protest was real until someone was hoisted up onto the Stump to lead cheers.”

But the Stump’s reign came to an end in fall 1975, when a group of students lopped off a hefty portion of it in a misguided effort to raise funds for UNICEF. “A classified ad in the Sun suggested a ransom payment would result in the return of the missing three feet,” Glenn Altschuler, PhD ’76, and Isaac Kramnick write in Cornell: A History, 1940–2015. “Money was collected and offered to anyone who came forward. Painted on the shortened stump was ‘outrage’ in large red letters, along with ‘foul bloody murder!’ and ‘the assassin shall be tarred and feathered and run out of town.’ ” 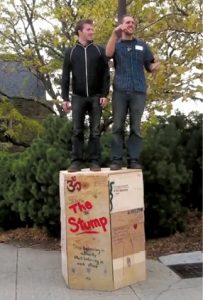 The amputated portion was eventually located at a nearby state park. It was reattached using metal rods—though some students complained that the job was shoddy—only to be knocked over, left to languish near a loading dock, and ultimately discarded. A plaque in the Stump’s memory now stands in its place. But in 2012, a group of student activists tried to revive the tradition (unsuccessfully, as it turned out) by installing a hexagonal wooden structure—roughly of the original’s proportions and labeled “The Stump” in bright red letters—outside the Straight. From atop the jury-rigged dais, August Williams-Eynon ’14 and Russell Gutterson ’14 appealed to the University to leave the new “stump” in situ—hoping that it would transcend even its namesake and serve as “a space for political theater and political discourse of all different kinds.”