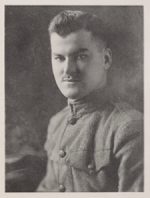 One hundred years ago this October—just a month before the Armistice that ended World War I—Corporal Morgan Smiley Baldwin 1915 died in a hospital in northern France, succumbing to injuries he’d sustained on the battlefield a week earlier. A few years later, his father and fellow Cornellian, Arthur Baldwin 1892, decided to commemorate his son’s passing in a somewhat unconventional way: he donated a grand stone staircase on the outskirts of campus.

Completed in November 1925, the Baldwin Memorial Stairway comprises more than seventy steps. It connects University Avenue to Delta Phi, the fraternity—housed in Llenroc, Ezra Cornell’s former mansion—to which both Baldwins belonged (as did Morgan’s younger brother, Donald Baldwin 1916). The stairway was designed by a well-known architect, Bryant Fleming 1901, one of the developers of Cornell’s landscape architecture program. A large landing near the top offers a panoramic view of Cayuga Lake and the city below. Here, an inscription reads: “This stairway is erected in memory of Morgan Smiley Baldwin Cornell 1915, who lies where he fell at Boni-France, September 29th, 1918.” 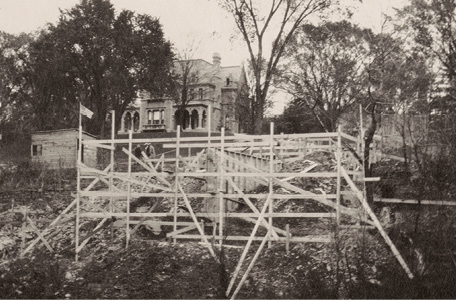 The stairs under construction in the early 1900sRMC

The gift was intended to connect Cornell to the City of Ithaca, providing a direct path for foot traffic between the two. “Students did more things downtown back then,” says Elaine Engst, MA ’72, the University’s archivist emerita. “They lived downtown much more, too; there weren’t even men’s dorms until 1916.” Indeed, during his days on the Hill, Arthur Baldwin lived on Linn Street (one block below University Avenue) and would frequently walk to campus using a well-worn shortcut through a nearby cemetery. After the city closed off that path and many students found their commute considerably lengthened, Arthur’s gift was a way to both commemorate his son and provide a practical benefit to the Cornell and Ithaca communities. “With Ithaca being so hilly,” says Ross Gottesman ’04, a Delta Phi member who lived in Llenroc for three years, “it’s a very convenient thoroughfare for a lot of people.”

The upper part of the staircase, adjacent to the Delta Phi house (Llenroc)Kitty Kemp

In 2006, masons doing restoration work uncovered a sealed copper box embedded in the stairway’s stone wall. Among its contents were photos of the Baldwin family, the memorial’s original blueprints, and Morgan’s Delta Phi pin and ribbon. In a ceremony later that year, a new stainless steel box was installed containing the original items and a few additions, including a fraternity pennant and a copy of the Daily Sun. Fittingly, the event was held on Veteran’s Day.