I really enjoyed the wide variety of articles in the November/December 2019 issue but was especially intrigued by the one featuring linguist Allan Metcalf ’61 (“In a Word”). I’m wondering if he has a thought as to how “No problem” seems to have replaced “You’re welcome” as a rejoinder to “Thank you.” Somehow, the former irks the heck out of me.

Some ten to twenty years ago, William Safire in his New York Times Magazine column made the definitive statement that “guy” had by that time become as acceptable for references to women as to men. I took it as welcome support for the obvious spoken usage that I have observed for at least the last forty years and have cited it when helpful. Of course, as Bill Bryson put it equally definitively in The Mother Tongue, there are no rules of grammar, merely variations in use of spoken and written English (a living language and all that) that satisfy or violate the “rules” of one of umpteen grammatical masterworks adopted by some body or other—say, the New York Times, educational and governmental institutions, and the like. Bryson immediately liberated me from further concern when reading in the daily papers the typical “there’s” when the meaning is what I understand to be “there are.” 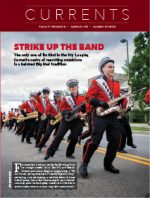 Strike up the Band

What happened to Brown’s marching band? They performed the funniest halftime show I’ve ever seen at a Cornell home game. It was a tribute to the best Ag school in the Ivy League. I seem to remember a chicken formation. This was in 1973.

The July/August 2019 issue featuring Kroch Library (“Collectors’ Items”) reminded me of a visit I made there during my Reunion in 2014. I was writing family history stories when I came across an account of the typhoid fever epidemic in Ithaca in 1903. The yearbook belonging to my grandfather Daniel Lawrence Bellinger Jr., ME 1905, referred to “the great sorrow” of his sophomore year. I learned that eighty-two people, including twenty-nine Cornell students, died in a typhoid fever outbreak, caused by contaminated water. The lack of a filtration plant on Fall Creek, where a dam was built in 1903, resulted in unsafe water, though notices in the local paper claimed it was safe.

At that time, financier Andrew Carnegie was on the Cornell Board of Directors. He stepped forward and paid for the construction of a filtration plant, at a cost of $11,000. He also reimbursed parents and students for expenses incurred, including funeral costs. The final figure for those reimbursements was a little over $81,000. Parents sent letters detailing their costs for medicine, care, and transporting their child home for burial. They told the sad stories of lives cut short, dreams never realized.

During that Reunion weekend, I spent a morning at Kroch Library, where I was able to read many of these letters. They are heartbreaking. What a privilege that I was able to hold those letters and feel in a compelling way how this tragedy affected people. For me this is an extremely meaningful example of the importance of the Kroch Library’s mission.

Over twenty years ago, I read in CAM that the University Library held the only copy owned by a private institution of the Gettysburg Address, written out by Lincoln. (The president had responded to several requests to write out personal copies, which were then sold at auction to raise funds for the treatment of wounded Union soldiers.) This was before Cornell librarians determined that exposure to light was threatening to the ink, and stopped bringing it out for individual viewing. The next time I was on campus, I requested to see it and, within a couple of minutes, I was holding Lincoln’s Gettysburg address, laminated between two pieces of transparent plastic, in my hands. It was on yellow legal pad paper with faint lines, written on both sides of the page in a modern, highly legible handwriting—none of your eighteenth-century curlicues and s’s that look like f’s, or vice versa. The most famous piece of American political oratory, frequently memorized by students . . . my holding these ten or eleven sentences was the thrill of a lifetime. How connected, how human it made Lincoln for me.

CAM encourages letters and comments from readers on the magazine’s content. They may be edited for length, clarity, and civility. We are not able to publish and respond to all correspondence received. Send to: Editor, Cornell Alumni Magazine, 401 East State Street, Suite 301, Ithaca, NY 14850; jeb375@cornell.edu