When Jeremy Shuler ’20 matriculated on the Hill in fall 2016, his mom escorted him around campus for the first week, making sure he knew how to get from one classroom to the next. A severe case of helicopter parenting? Hardly. At the time, Jeremy was just twelve years old—the youngest freshman in Cornell history. And what’s more, it was Jeremy’s first taste of conventional education, having been homeschooled his entire life. “He didn’t even go to kindergarten,” says his mother, Harrey Shuler, adding with a laugh: “It was like the first day your kid goes to school—but it was college.”

Three and a half years later, Jeremy is entering his senior spring, poised—at sixteen—to become the University’s youngest graduate when he earns his bachelor’s degree in applied and engineering physics in May. In contrast to the media frenzy that accompanied news of his admission—when his story trended on Twitter—his Cornell career has been a low-key experience. And since Jeremy’s attendance required that the whole family relocate to Ithaca, it has also been something of a homecoming: Jeremy’s dad, Andrew Shuler ’97, is not only a mechanical engineering alum but a city native whose own father, Michael Shuler, is an emeritus professor on the Hill. “Cornell really took a chance taking him,” Andrew says, as he and his wife and son chat with CAM in Goldwin Smith’s Temple of Zeus café last fall, “and we’re really appreciative and happy at how it turned out.”

As Jeremy’s parents and grandfather recall, it was clear early on that he was intellectually gifted—talking before age one, doing arithmetic by two or three. (Of toddlerhood, Jeremy says, “Most of my memories from that time are my mom teaching me basic math.”) Harrey was born in Korea, and she remembers that Jeremy was around eighteen months old when he watched her type an e-mail in her native language; he asked what she was doing, and she wound up teaching him the Korean alphabet. By the next day, he could sound out the words. “A couple of days later,” she says, “he could read English too.”

Realizing that Jeremy didn’t belong in a typical school, Harrey—who has a doctorate in aerospace engineering from the University of Texas at Austin, where the couple met as grad students—decided to put her career on hold and homeschool him, while Andrew worked as a systems engineer at Lockheed Martin in Dallas. During those years, Jeremy’s parents helped him make friends who had similar interests by taking him to a weekly Saturday “math circle” where college professors and PhD candidates mentored talented local youths. Asked if he felt like he missed out by not attending a regular school, Jeremy shakes his head. “I didn’t really have any perspective on it—but even if I had, I don’t think I would have wanted to,” he says, noting that throughout his life he has never related particularly well to kids his own age. As his father recalls, when Jeremy was little, “we would take him to the playground, and while the other kids wanted to run around, he wanted to draw letters in the gravel.”

After completing his high school coursework online, Jeremy earned a diploma at age twelve. When he was accepted into Cornell’s Class of ’20, Andrew transferred to Lockheed’s site in nearby Owego and the family built a house on the outskirts of the Belle Sherman neighborhood in Upper Collegetown; the fact that it’s walking distance from campus, Andrew says, “was important, so he could be independent.” As the Shulers note, all the media attention surrounding Jeremy’s admission—including coverage in Time, the Washington Post, and many other outlets—had one distinct advantage. “Students recognized him, and they were all nice to him,” says Harrey. “They were curious and talked to him, befriended him. It was a big help in adjusting to this new environment. He wasn’t lonely.” 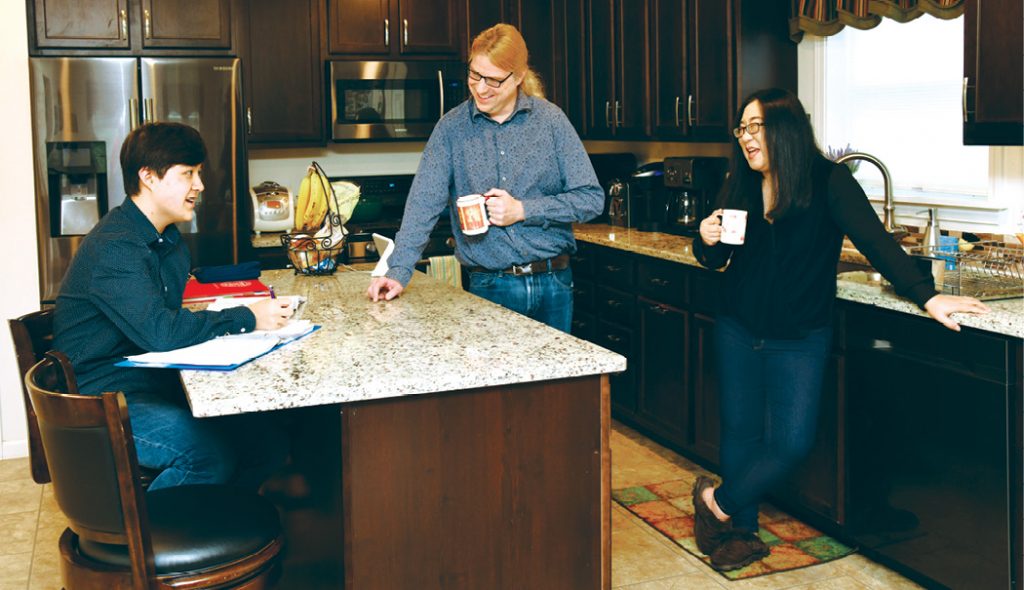 Jeremy with his parents at their home in Upper Collegetown last fall. Tom Hoebbel

The most significant challenge: getting the hang of pedagogical dynamics. “Being in the classroom was different from what I expected at first,” Jeremy says, “and it took a little time for me to get used to the protocol.” As his mother elaborates: “When you’re homeschooled or in a private setting, if you have a question you can just talk; in a big class, you have to raise your hand and wait until you’re called. He didn’t have that experience, so he made some mistakes; instead of waiting he would just talk. I think that was annoying to some students and instructors, but after the first semester he got the protocol down pretty well.”

In addition to his degree in applied and engineering physics, Jeremy is minoring in math and has taken electives in such fields as linguistics, astronomy, and foreign languages (Polish and Old Norse); he satisfied his phys ed requirement with two swimming classes. Club-wise, he’s a member of the Cornell chapters of the Society of Physics Students and of Tau Beta Pi, the national engineering honor society. This semester he’s conducting honors research, doing computer simulations of plasma lasers that could be used to develop smaller particle accelerators. “Engineering physics is very rigorous and requires a lot of self-discipline,” says his academic adviser, Jeffrey Moses, MS ’04, PhD ’06, an assistant professor in the department. “When Jeremy began at twelve years old, it seemed quite remarkable. He’s a great student and he has done very well.”

Jeremy’s next goal: to earn a doctorate in theoretical physics and have a career in academia. He’s currently in the process of applying to graduate programs, and his parents plan to relocate along with him. “I think Cornell has been good for him,” says his grandfather, who began teaching chemical engineering on the Hill in 1974 and helped establish the biomedical engineering department, becoming its founding chair in 2004. “He has matured quite a bit while he’s been in Ithaca and learned a lot in terms of interacting with other people. I was never concerned that he wouldn’t do well academically, but I’ve been pleased to see him grow as a person at Cornell. He has a real sense of humor—a little bit quirky and sometimes subtle. He’s a nice young man, too.”

The particulars of Jeremy’s biography—a child prodigy from Texas who attends college and grad school years ahead of his peers and has a passion for theoretical physics—beg comparison to one of the most famous TV characters of the past decade: Sheldon Cooper of “The Big Bang Theory” (and its current prequel series, “Young Sheldon”). It’s an observation that has been made more times than the Shulers can count, but they don’t mind; not only do they enjoy watching “Big Bang,” they’ve used the show to help Jeremy overcome some challenges with social cues. “When he was ten, he was like Sheldon,” Harrey says. “He couldn’t quite tell if someone was joking, sarcastic, or actually mean.”

Another similarity to Sheldon: a complete lack of interest in learning to drive, though his sixteenth birthday in December made him old enough for a learner’s permit. As Jeremy and his parents laughingly observe, situational awareness has never been his strong suit; when it came to navigating campus, Harrey says, “the biggest concern was if he could go to school and not be hit by a bus.” But on the Hill, he has gained those skills and many others. “He has learned quantum physics and general relativity, and how to cross the street and take the bus,” his father says. “All the usual things.”