In 2013, before Melissa DeRosa ’04, MPA ’09, came on board as communications director for New York Governor Andrew Cuomo, she got a memorable call from her future boss. “Are you ready for this?” he asked, as she recalls. “Because you’re standing in the batter’s box, and the pitches are going to come at your head at 100 miles an hour. You’re basically going from the minors to the majors.”

DeRosa thought the governor was exaggerating. After all, she’d had plenty of experience with tough jobs. She’d managed a congressional campaign at twenty-five and directed then-President Barack Obama’s national political organization at twenty-seven. And her most recent gig was as deputy chief of staff for the state Attorney General’s office, where she’d led the office’s efforts to help pass a law creating a statewide database that tracks prescriptions, which has been praised as a national model in the fight against opioid abuse. Yet looking back on that phone call, DeRosa says the governor was absolutely right. “In terms of the intensity you feel on a day-to-day basis—and the challenges you face—it’s unbelievable,” she says. “It’s nonstop and it’s demanding, but when you hit the ball right, it makes it all worth it.”

DeRosa at a New York State Council on Women and Girls event.The office of Governor Cuomo

Over the past five years, DeRosa has risen to become one of the most powerful figures in New York politics. In 2015, she became the governor’s chief of staff—spearheading some of Cuomo’s biggest legislative victories, including raising the statewide minimum wage to $15 an hour and establishing the country’s most comprehensive family leave policy (which gives New Yorkers up to twelve weeks of paid time off for new parents, those caring for a sick relative, or military families with deployment-related needs). In April 2017, Cuomo named her his top aide—the job is formally known as “secretary to the governor”—a position no woman had ever held. And while DeRosa says she’s “honored and humbled to be the first,” she’s well aware there’s a long way to go before women achieve full gender equality in government. Case in point: she often has to correct people who assume that her title means she’s Cuomo’s administrative assistant. “I feel like when men have held this position, they didn’t have to explain the distinction,” says DeRosa, who majored in public administration in the School of Industrial and Labor Relations and went on to earn a master’s degree from the Cornell Institute for Public Affairs with a focus on government, politics, and policy. “They didn’t have to say, ‘I’m secretary to the governor—I’m not his typist.’ ”

In fact, she is charged with overseeing the daily governmental operations of the nation’s fourth-largest state. DeRosa lives in Brooklyn Heights with her husband, an executive at Uber, but is on call 24/7—traveling all over New York and beyond. “I’m wherever the governor is,” she says. On a typical day, she might meet with legislators, labor leaders, officials from the Metropolitan Transit Authority, speechwriters, policy advisers, and more. On an atypical day—such as the one in December when a would-be suicide bomber set off a homemade device in a walkway under the Port Authority Bus Terminal—she helps the governor cope with whatever crisis is at hand. (On that particular morning, she was making calls from home when she was notified of the bombing; she rushed out to the scene and met Cuomo for the briefing and press conference.)

On the chilly day in late November when she spoke with CAM in Cuomo’s midtown Manhattan offices, she’d spent her morning going over winter storm preparations with state officials. Much of the week had been devoted to battling the GOP-backed tax plan that Congress would ultimately pass; Cuomo called it “devastating” for New Yorkers because it eliminated state and local tax deductions used by millions of residents. “For me, the biggest challenge is managing to keep the trains running,” she says, “and at the same time being on top of whatever the crisis is of the moment.” DeRosa adds that this has become an even bigger challenge since President Trump took office, because the governor has opposed the White House on a number of key issues, such as the federal response to hurricane-ravaged Puerto Rico. Since the New York metro area is home to the largest Puerto Rican population in the mainland U.S., DeRosa says the crisis is of obvious concern for Cuomo, and he has stepped in to help with recovery efforts—sending supplies and aid workers and visiting the island three times—because the U.S. government hasn’t done enough. Says DeRosa: “The governor is playing a much bigger national role on certain issues where, frankly, there’s a lack of leadership in Washington.”

DeRosa also serves as chair of the New York State Council on Women and Girls, which is tasked with ensuring that the rights of women are incorporated into any new program or policy. A steering committee made up of dozens of women from academia, business, and nonprofits—including WNBA president Lisa Borders, fashion designer Eileen Fisher, and New York Civil Liberties Union executive director Donna Lieberman—advises the council on matters ranging from affordable child care to workforce equity. DeRosa helped Cuomo launch the organization last year after a similar White House panel went defunct; the federal council—created under President Obama to help address topics such as gender disparity in education and sexual assault on college campuses—has been inactive while the Trump Administration evaluates whether to keep it, and one White House spokeswoman has said it may be “redundant.” “It felt so tone-deaf, so wrong, and so backwards,” says DeRosa, adding that forming the state council “was a concrete way that we could say, ‘We don’t agree with you. We believe in continuing progress.’ ”

DeRosa has helped raise awareness about one of the issues the council plans to tackle—sexual harassment—by speaking out about her own experiences with sexism and misogyny in the workplace. In an October speech at a “women and media” event, she talked about how some people still call attention to her looks instead of her position; one state legislator she recently phoned on behalf of the governor told her he’d rather talk to Cuomo “man to man.” She also described an incident that occurred during a conference call when she was twenty-five and working at a lobbying firm. After her then-boss said DeRosa would be the lead on a project, a man on the other end of the line joked that she could “take the lead right up to my hotel room.” The others on the call ignored the remark, but DeRosa says the episode has always stayed with her. “I’ll never forget it,” she says. “It was a moment where I was like, ‘How do others look at me, and what do they see as my value?’ ”

Raised in Saratoga Springs and Albany, DeRosa grew up steeped in state politics thanks to her father, now a powerful Albany lobbyist whose résumé includes serving as district director to Democratic Congresswoman Louise Slaughter. At four, DeRosa campaigned door to door for Slaughter; at nine, having gone with her dad to his lobbying firm and the capitol building on Take Your Daughter to Work Day, she wrote a report bemoaning the late budget in the state senate. (Her mother framed it, and it now hangs in DeRosa’s office.) At sixteen, she interned with the AFL-CIO’s political director; while at Cornell, she spent a summer in Washington, D.C., working for then-Senator Hillary Clinton’s political action committee. “Looking back on it,” she says, picking up a photograph of herself as a child at the 1992 Democratic National Convention, where Bill Clinton was formally nominated, “it’s like there was a natural trajectory to my career.” But DeRosa says she has no ambitions to hold elected officer herself, noting: “I prefer to be behind the scenes.”

In 2020, might she be working on another Democratic presidential campaign—a bid for the Oval Office by her current boss, as has been widely speculated? DeRosa smiles, saying she’s focused on issues like fixing New York City’s troubled subway system and dealing with the state deficit—not to mention Cuomo’s upcoming bid for a third term as governor. “To talk beyond that? I think everyone’s getting a little ahead of themselves,” she says, before rushing off to an appointment. “Right now, I can’t think past tomorrow.” 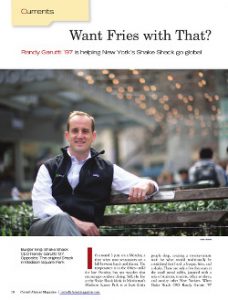