Each workday, Becky Katz ’09 commutes 2.6 miles from her house in Atlanta’s Adair Park neighborhood to her office in City Hall, a trip that takes about twenty minutes. And since her job is to serve as the city’s first-ever chief bicycle officer, she always travels on two wheels—rain or shine. 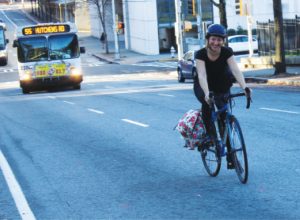 Wheel life: Katz, who didn’t bike much during her Cornell days, became a cycling aficionado after moving to Atlanta without a car.Dyana Bagby/Atlanta Intown

Katz’s role—a mix of public relations, politics, and planning—has made her a rare ally to bikes in a city that has long designed its infrastructure to accommodate a sprawling metro region with millions of motorists. With less than 1 percent of residents identifying themselves as daily bicycle commuters, Atlanta lags behind cities like Portland (which boasts ten times that percentage) and New York, home to CitiBike, a share program with 10,000 cycles. Thus, Katz often grapples with the question: Is Atlanta, a city built for cars, ready to make room for bicyclists? “Change on our roads is a challenge,” admits Katz, who pedals a $1,000 Kona Honky Tonk bike. “There’s a learning period.”

As Katz can attest, the city looks far different from behind a set of handlebars than from behind a steering wheel. Cycling in Atlanta can be a great way to get some exercise while avoiding the city’s infamous traffic and congestion. But with less than one-tenth of streets designed to accommodate bikes, Katz says that for cyclists unfamiliar with the best routes, it can be tricky to navigate the city safely. For instance, on one of the roads that Katz uses to commute to work, she has to swerve around grates in the pavement whose bars run parallel to the curb, not perpendicular as they should for safe cycling—and if her front tire got stuck, she could go flying over the handlebars. The city’s lack of dedicated bike lanes also makes life on two wheels more dangerous, a fact that Katz knows all too well: in February 2015 a driver traveling thirty-five miles an hour rear-ended her, totaling her bike and sending her to the hospital with a broken wrist and shoulder socket.

A Bronx native, Katz wasn’t a particularly avid cyclist before she moved to Atlanta. On the Hill, she majored in environmental engineering and participated in AguaClara, the campus group that designs water purification systems in Latin America with the input of local residents—which, she says, taught her the importance of community engagement in building infrastructure. She relocated to Atlanta in 2011 when her partner enrolled at Georgia Tech; they didn’t own a car, so she got to know the city on two wheels. The experience was tough at first—Atlanta is a hilly, heavily trafficked city that can be difficult for newcomers to navigate—but ultimately liberating, since she could travel more widely and freely than on foot or public transportation. “The feeling of community when you bike in Atlanta is really strong,” Katz says. “It’s an amazing feeling.”

After Katz started volunteering with a nonprofit that works to improve Atlanta’s parks, it led to a full-time position as a project manager. When the mayor decided in 2015 that the city needed a staffer focused on bike commuting, Katz landed the job. Tapping her AguaClara experience, she has taken a community-minded approach to the work. That has meant including cyclists, who’ve historically been left out of the region’s car-centric design, in transportation planning; she has also tapped a more diverse group of Atlanta bike aficionados—beyond the diehard, spandex-clad road warriors—to weigh in on future projects. Says Katz: “You’re seeing more grassroots advocacy for better and safer roads.” And while many bike commuters have long complained that drivers hog the roads, Katz believes that motorists can be reasoned with instead of reviled—and she hopes that ultimately they’ll see bike lanes as a plus, rather than as impediments to their travels.

Is urban cycling supported in your city? Share your thoughts and experiences in our Comments section!

Since Katz took the job—her informal title is “bike czar”—the city has expanded its biking lanes from about eighty miles to more than 110. In 2016, it launched a bike share program that now includes about 500 cycles, with plans to double that by the end of the decade. But she acknowledges that there’s still a long way to go in making Atlanta a bike-friendly city—especially when it comes to some of the busiest streets, which remain perilous to cyclists. “A little ounce of bravery is needed at certain intersections,” she observes, “because our roads have so long been designed for cars.”

One thought on “Ticket to Ride”