The theatre critics at the New York Times aren’t much known for gushing—which made an April review of a show directed by Sam Gold ’00 that much more of an eye-popper. “Plays as funny and moving, as wonderful and weird as The Realistic Joneses, by Will Eno, do not appear often on Broadway,” wrote the notoriously exacting Charles Isherwood. “Or ever, really.” When the production didn’t receive a single Tony nomination, Isherwood was so incensed he devoted a column to the snub. 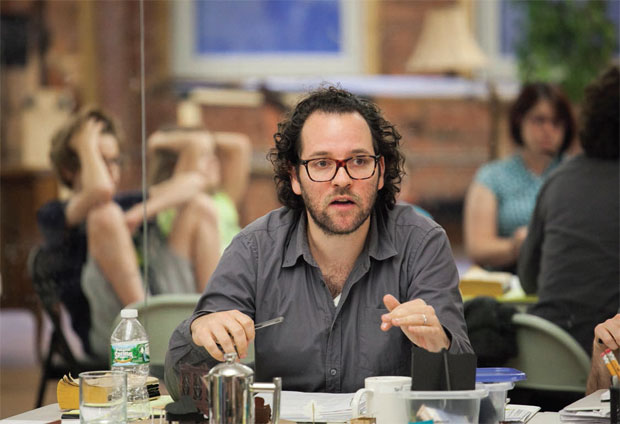 The play is another hit for the thirty-six-year-old Gold, whom Isherwood praises as a “consummate director of adventurous new writing for the theater.” As theatre arts professor Bruce Levitt notes, one measure of Gold’s status is that, well . . . he works like crazy. “Very few people work all the time, but he’s never without a show,” says Levitt. “He always seems to be doing three shows a year, which is unheard of.”

The Realistic Joneses, which ends its limited run in July, is a dark comedy with four characters, all named Jones. It’s summer in a small woodsy town, where the long-married Jennifer and Bob (Oscar nominee Toni Collette and Tracy Letts, a Tony-winning actor and Pulitzer-winning playwright) are haltingly coping with his incipient neurological illness. Into their backyard one night stumble Pony and John (Oscar winner Marisa Tomei and Michael C. Hall of “Dexter” fame), their eccentric, volatile, and oddly vulnerable new neighbors. For the next ninety minutes, the two couples ponder life, death, love, marriage—and what to do with a squirrel in advanced rigor mortis. “It’s people facing mortality in an incredibly mundane but also existential and cosmic way,” Gold observes. “It’s funny and enjoyable to watch, but it also connects to something spiritual and large.” 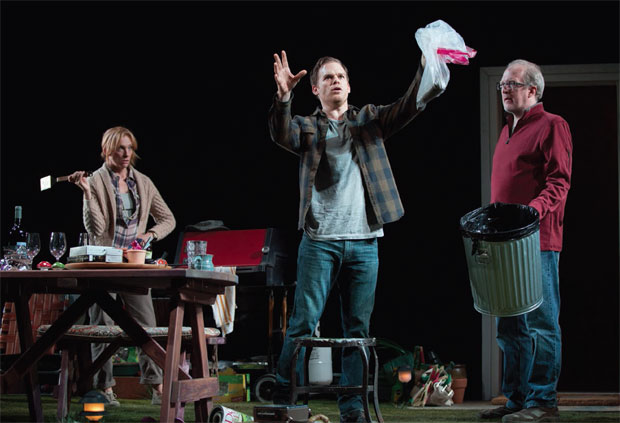 A native of the New York metro area, Gold started acting in high school. He was cast in a collection of one-acts his first week on the Hill, and his junior year he played the lead in Equus. At twenty, he was an understudy in the Broadway production of The Diary of Anne Frank—”I pushed Anne Frank down the stairs nightly,” he told Playbill in 2012—but soon shifted to the other side of the proscenium arch. “It was clear that I was not a great actor, but I had a point of view that could make me a good director,” Gold recalls. “You really have to want to tell people what to do. I had a lot of ideas about how to tell a story; I had aesthetic opinions about how things should look and be and move. I was also a kind of disgruntled audience member who felt I wasn’t seeing my generation represented in professional theatre. I was an opinionated kid.”

On campus, he majored in theatre arts with a film minor and directed numerous shows, including a mainstage production of the quirky domestic comedy The House of Yes. “As a student, Sam was insatiably curious about everything,” says Levitt. “He would come into your office and ask question after question. He was always interested in knowing more, getting details, fine-tuning.” Gold studied directing at Juilliard, getting some early breaks through close working relationships with up-and-coming playwrights like Annie Baker, who’d go on to win a Pulitzer for The Flick. One of his first major Off-Broadway productions was her play Circle Mirror Transformation, which earned him an Obie for best director. “For a lot of the plays I do, I get involved while the writer is still writing,” Gold says. “It’s nice to have an outside perspective, someone who’s not inside the birthing process. So I tend to become an ear for the writer. That also gives me great insight into the play, because I’m seeing what the writer is trying to accomplish even before they finish.”

Gold’s Broadway directing debut came in 2011 with Seminar, starring Alan Rickman as a literary lion leading a fraught writer’s workshop; it was followed in 2013 by William Inge’s Picnic with Ellen Burstyn and Mare Winningham. He chased The Realistic Joneses with an Off-Broadway production of the London hit The Village Bike, starring indie muse Greta Gerwig as a pregnant schoolteacher having an extramarital affair. In October, he returns to Broadway with Tom Stoppard’s The Real Thing starring Maggie Gyllenhaal and Ewan McGregor. “One of the things that makes Sam a good director is that he’s deeply human,” Levitt muses. “He’s gracious, kind, and open; he loves actors and writers. He creates such a wonderful, warm, inviting, safe space for great work.”