Environmental toxicology professor Ann Lemley, PhD ’71, felt the first nip of retirement jitters while completing the stacks of forms that papered her path out of Cornell. She’d arrived as a grad student, gone on to a postdoc, and risen to full professor. Now she was pulling the ripcord on a thirty-two-year career. “I had this sense of being cut loose, that soon I’d no longer be fully connected to something that was my whole life, basically,” says Lemley, who retired with emerita status in December. “My sense of identity as a Cornell faculty member is profound.” 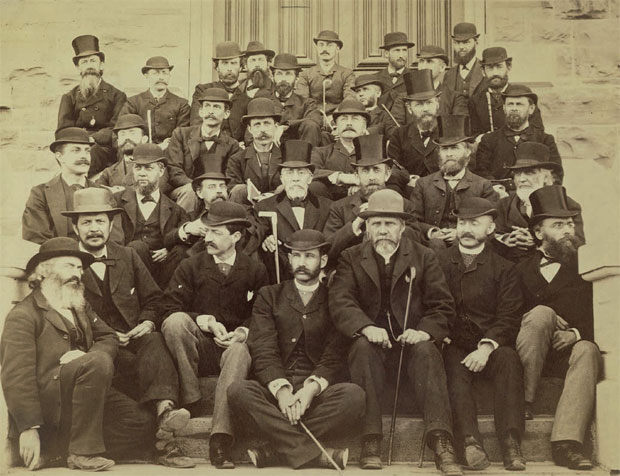 The professorial ranks in 1882. Photo: Cornell in Pictures.

Lemley landed softly on that other shore by becoming active with the Cornell Association of Professors Emeriti (CAPE). All emeriti automatically become CAPE members; nominal annual dues, which are voluntary, directly support group activities. “Getting involved with CAPE helped ease my transition into retirement,” Lemley says. “They’re a great bunch of people, very committed to the University and to sharing their collective wisdom.”

Cornell emeriti get such perks as free parking, office space, and, in some departments, $2,000 per annum for five years after retirement. But CAPE, which was founded in 1982 and officially recognized as a Cornell organization in 1998, provides something extra: a sense of continuity and belonging. Members organize lectures and tours, support various projects, and stay connected through newsletters, e-mail, and monthly meetings with the dean of the faculty. “The University’s greatest resource is its faculty,” says J. Robert Cooke, professor emeritus of biological and environmental engineering and a former dean of the faculty. “If you ask them to do something, it’s amazing how often they’ll do it. That’s what makes the clock tick at CAPE—people who have a sense of generosity and a willingness to contribute.”

Monthly lectures and regional tours provide settings where emeriti can mingle outside departmental silos. CAPE also supports numerous academic initiatives including the Podell Professor Emeriti Awards for Research and Scholarship. A Podell grant helped Susan Watkins, professor emerita of apparel design, update a third edition of Clothing: The Portable Environment, an image-rich textbook. While not an active member, she says that regular communications from the CAPE office act as “a kind of pain management” for those isolated by retirement.

The group is not limited to emeriti; a handful of CAPE’s members, like former Johnson Museum director Frank Robinson, are proactive subscribers. “CAPE demonstrates the extraordinary range, intellectual vitality, and deep commitment of a large number of retired faculty,” says Robinson, an ardent booster who serves on the group’s executive committee. “The remarkable number of projects they organize and the wide range of teaching and research they’re engaged in make it an invaluable resource for Cornell.”

Most of CAPE’s 625 members live in Ithaca; roughly 110 maintain departmental addresses and half live within forty-five minutes of campus. While many winter elsewhere—they are, after all, a brainy group—they don’t draw a bright line between career and retirement. “I’ve spent forty years of my life in Ithaca; my wife and I raised two daughters here,” says Fred Gouldin, professor emeritus of mechanical and aerospace engineering and CAPE’s current president. “In addition to my strong ties to the University, this is my home.”

Among CAPE’s missions is supporting members’ lifelong passion for advancing scholarship in their disciplines and beyond. Howard Howland, PhD ’68, professor emeritus of neurobiology and behavior, is working on a University memorabilia project; Cooke is immersed in a ten-year labor of love to create an online database of faculty oral histories, biographies, and more. Other efforts include teaching in regional prisons, offering computer support for emeriti, hosting Medicare workshops, working to equip lecture halls with assistive listening systems, and fundraising for the University Library (to the tune of $50,000 last year alone). “I’ve been with five universities, all of them splendid,” says Robinson. “But my perception is that CAPE is unique to Cornell. The accumulated knowledge and experience here is a real treasure.”