Fredrika Loew ’12 has wanted to be an archaeologist since she was five, when her older sister came home from second grade agog over Greek myths. Last winter, while working in the Division of Rare and Manuscript Collections as she pondered grad school, the former Near Eastern studies and archaeology major decided to take a closer look at one of the University’s Egyptian treasures: a papyrus scroll that Andrew Dickson White brought back from Cairo in 1889.

Found in the tomb of a high-ranking priest and dating from the Ptolemaic period—roughly 320 to 30 B.C.—the scroll is in hieratic, the version of hieroglyphics that’s written on papyrus. Eight feet wide and a foot tall, it features an illustration from the Book of the Dead: Spell 125, the famous passage describing how a person is judged by having his heart weighed against a feather.

After White bought the scroll—for about $125—he consulted a scholar in Cairo. But the Egyptologist in question was too busy to translate it; he told White that, based on the illustrations, the text had to be Spell 125. The papyrus was labeled as such—and stayed that way for the next century and a quarter. “It just sat here,” Loew says, “everyone assuming it had been translated, but nobody actually knowing.” 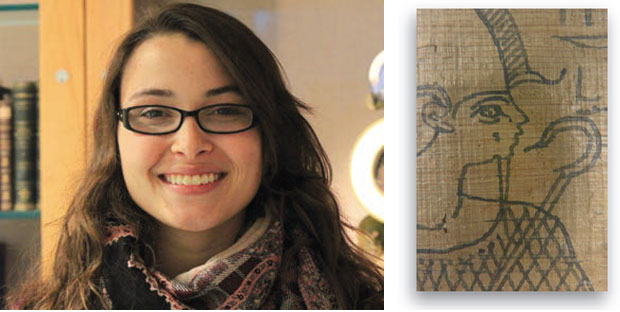 But just as you can’t judge a book by its cover, you can’t necessarily divine an ancient scroll from its drawings. Last February—inspired by the hieroglyphics on a blue scarab that White had made into a hat pin—Loew undertook a translation. Having studied hieroglyphics as an undergrad, she figured she could teach herself hieratic, which is read right to left and has no vowels. At the time, she still thought the ancient document described Spell 125—but she quickly realized that was wrong. It turned out to contain a description by the priest, named Usir-Wer, of what awaited him after death. “It talks about all the festivals that he’s going to partake in and everything that’s going to happen to him once he reaches the afterlife,” Loew says. “How Osiris and Isis will praise him—how it’s going to be great for him, pretty much.” The text reads, in part: “Your ba [soul] will appear in a chamber of white gold. Royal linen will descend on your mummy bandages.”

So far, with the help of classics professor Caitlin Barrett, Loew has done a rough translation; now she aims to complete a definitive one. It’s no easy task. “You have to have it perfect, because if you publish it people will tear you apart,” says Loew, who spent part of last summer working twelve-hour days on an archaeological dig in northern Israel. “There are multiple possible translations for each sentence. You have to justify how you translated every single word.” The two are at work on a book about the scroll and its translation—an exhaustively detailed volume that, Loew says, “is definitely not for a lay audience.”

Last summer, Kroch Library hosted an exhibit devoted to the scroll and some of the University’s related holdings, including a mummified ibis, ancient coins and statuary, and a few of the 140-plus photos that White brought back from Egypt. The scroll itself is displayed and stored face up, under glass; hanging it could damage the papyrus, which is warped and flaking in places. There are no records on the provenance of its blonde wood frame, backed with Masonite and masking tape. “Our conservator looked at it and said it was abysmal,” Loew says, noting that the library is seeking funding to properly conserve it. Meanwhile, she continues her quest for another key to the scroll’s history. “I haven’t been able to find the mummy whose tomb it came from,” she says. “That’s my white whale.”