When Julie Kathryn ’01 was considering songs by other artists to record, Bob Dylan’s “Emotionally Yours” seemed like a perfect choice. For one thing, Kathryn—who drops her last name, Smith, as a performer—readily acknowledges the influence of Dylan, Neil Young, Joni Mitchell, and other Sixties singer-songwriters on her work. And she says that exploring the range of human emotion is at the core of her songwriting.

Kathryn traces that influence to her days as a psychology major at Cornell and through her three years as a social worker in a New York City public defender’s office after earning an MSW at Columbia. Her job included visits to prisoners in the Manhattan Detention Center—better known as the Tombs. “That helped me get more in touch with the human condition,” she says. “Social work is about empathy and just being with people, more than fixing or treating anything. When you do that day in and day out, you get in touch with raw human emotion. And I think that’s the strength in my writing—that my songs can hit a deep emotional core.” 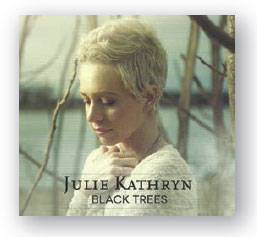 Growing up in Lake Placid, New York, Kathryn studied piano. She taught herself to play guitar while in high school and says that she’s always considered herself a musician, even when she was in graduate school and considering an academic career. At Cornell, she took music theory classes and sang with the a cappella group Hearsay. But for a long time her musical aspirations were limited by stage fright. “I had a real challenge performing,” she says. “But I kind of forced myself through a bunch of gigs, because it became clear to me that this is really what I want to do.” She also tried hypnosis, which, she reports, “works if you want it to.”

Two years ago, after gaining more confidence onstage, Kathryn decided that playing the occasional gig while working full-time was unsatisfying. She quit her job, started to teach music, and focused on her songwriting. After testing the waters with a four-song EP last year, she completed a full album, Black Trees, which was released in August. Eight of the eleven tracks were written or co-written by Kathryn; she also covers Greg Brown’s “Blue Car” and Jay Farrar’s “Windfall” along with the Dylan song. One of her originals, “Nightingale,” is presented in two different versions. While this might be a sign of uncertainty for some artists, for Kathryn it’s more indicative of her emotional range. On what she calls the “synth-dance version,” the upbeat music offers a counterpoint to a lyric about a bird “too fragile to fly”; the folk-rock alternate take leans harder on introspective lines like, “Teardrops fall underneath it all / You are broken and you don’t know why.”

Kathryn has been encouraged by the initial response to Black Trees, including a review in the music magazine Relix that praised the album as “executed beautifully both sonically and lyrically, and with nuanced simplicity.” She performed at the Greenwich Village showcase Rockwood Music Hall in early September and hopes to take her band on the road soon, probably as an opening act for an established artist. “And I’m writing more songs,” she says. “I’ve written fourteen over the past few months. I want to keep moving, to keep writing, to keep creating.”