The director of the Comprehensive Weight Control Program at Weill Cornell Medical Center, Dr. Louis Aronne is a nationally recognized authority on obesity and its attendant health issues. And for Aronne, “health” is the operative word. He’s a passionate advocate of treating obesity as a medical problem—arguing that it’s as hard for overweight people to keep the pounds off as it is to stop breathing.

Obesity expert Louis Aronne says excess weight isn't a question of willpower—it's a medical problem. His message to those struggling to be slim: 'It's not your fault.'

Whenever Dr. Louis Aronne lectures to a new crop of students at Weill Cornell Medical College, he offers a variation on the same lesson. To explain the limits of willpower in weight loss, he asks a student to hold his breath for a few seconds, then for longer and longer intervals. "Do this every day, and every week hold your breath for five more seconds," Aronne tells them. "In a year you should be able to hold your breath for an hour, right?" At that point, everybody laughs; it's a ridiculous notion. "And I say, 'Why can't you? What happens is that something tells you to breathe, because you're suffocating. And the same thing happens with weight. Something tells you to eat, because you're starving. It's not as immediate; instead of happening over a minute, it happens over days or weeks. But it's the exact same mechanism.'" 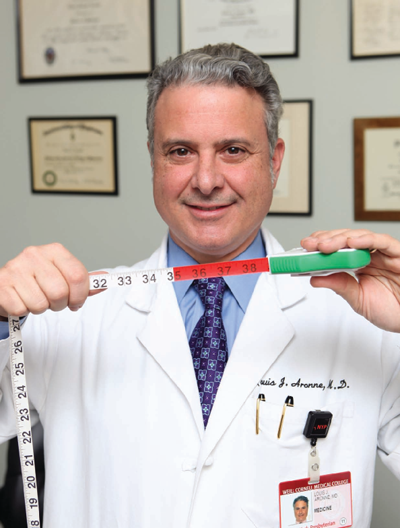 The longtime director of the Comprehensive Weight Control Program at NewYork-Presbyterian Hospital/Weill Cornell Medical Center, Aronne is a nationally recognized authority on obesity and its attendant health issues. He can be found blogging on the Huffington Post about why actress Kirstie Alley regained the eighty-three pounds she lost on Jenny Craig, or on CNN being interviewed about the questionable value of the Cookie Diet. He's even made multiple appearances on "The Late Show"; Aronne is David Letterman's longtime internist, and he diagnosed the TV host's heart ailment a decade ago. As Letterman says in a blurb on the back of Aronne's recent book: "Before we met, I was eating pork chops and candy for breakfast, lunch, and dinner. No joke . . . Dr. Lou saved my life."

Breast cancer. Infertility. Liver disease. Arthritis. Pancreatitis. Asthma. Clotting disorders. Depression. Sexual dysfunction. According to Aronne, those are just a few of the conditions that can be caused or exacerbated by overweight. And that's on top of the ones that are commonly recognized as being connected to obesity, like diabetes, heart disease, hypertension, and stroke. "Fifteen years ago we couldn't understand how storing too much fat causes so many different health problems," Aronne says. "But it's now completely obvious that fat cells are little endocrine organs that produce dozens of hormones that are critical for the body's normal functioning. If these hormones are produced in excess, they cause many of the chronic diseases that we treat in internal medicine, pediatrics, gynecology, and other specialties."

According to figures from the Centers for Disease Control and Prevention, since the early Sixties the percentage of American adults who are overweight has stayed roughly the same—about a third. But the number who are obese has more than doubled, now comprising another third of the population. And as Aronne notes, the percentage increase is even more dramatic among the severely obese. Figures from 1960-62 show that 0.9 percent of the population had a body mass index of 40 and above (the standard for being simply overweight is a BMI of 25 to 29.9); by 2005-06, the number had increased nearly sevenfold, to 6.2 percent. "Why is that?" Aronne muses. "What we're beginning to understand is that it's not purely bad habits. The system is far more complicated than that. The availability of inexpensive, tasty, high-calorie, high-fat, high-carb food clearly plays a role, as does not getting enough exercise. But what happens next is a subject of great research interest, because it seems to be that in people who are susceptible, what I've called a 'feed-forward' mechanism develops. And that is characterized by a resistance of signaling pathways to the normal physiologic signals that come from the fat cells to the brain." In short, eating junk food sparks a vicious cycle: "Not only does it taste good. Not only does it have too many calories. But when you eat it, it interrupts the signal between the fat cell and the brain."

In particular, Aronne focuses on a fullness hormone known as leptin, which is produced by fat cells. In people of normal weight, leptin tells the brain that it's time to stop eating, that the internal fuel tank is full. But as he describes it, an excess of fat cells means an overload of leptin— which disrupts that signaling process and foils our sense of satiety. "Whereas you may once have felt full within just ten minutes of eating a big meal, these signals may now take as long as twenty minutes to induce fullness," he writes. "The sensation of fullness you do feel is milder than usual, too, so it doesn't always persuade you to stop eating. Eventually, you may still feel hungry even when you've just eaten large quantities of food, or you may never feel hungry, but you also never feel full, either, so you continually graze on and on, with no signals to suppress your food intake."

High leptin levels also lead to inflammation, Aronne says, triggering a host of health problems. Take asthma, which is far more likely to strike obese children than those of normal weight. "Why, when they're both exposed to the same allergens and irritants in the air?" Aronne asks. "Well, obese children live in a chronic inflammatory environment. As weight is gained, white blood cells are attracted and activated, especially in abdominal fat, and this leads to inflammation in other parts of the body. So an allergen or an irritant hits the lung, and instead of having an inflammatory response that's self-limited, the inflammation becomes chronic in the obese child, whereas in the thin child, that doesn't happen. We're finding that's true with many different illnesses."

In The Skinny, Aronne outlines strategies to reduce weight by breaking the feed-forward loop, emphasizing lean protein, high-fiber whole grains, fresh fruits, and non-starchy vegetables over sugars, fatty meats, and simple carbs. He encourages readers to eat protein for breakfast (he's especially fond of egg-white omelets loaded with veggies), to equip themselves with healthy snacks like protein shakes or small servings of nuts when hunger strikes, to opt for filling foods like soups, and to make informed choices when eating out or buying prepared meals. He recommends a realistic exercise regimen that fits a person's lifestyle and abilities, especially for the purposes of maintaining weight loss and breaking through a plateau. 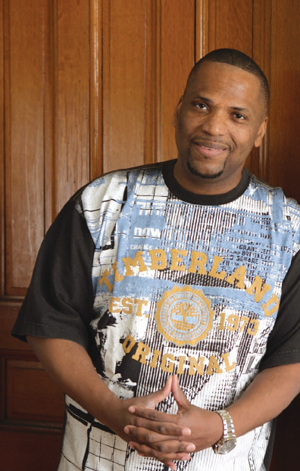 Such advice has helped Kenny Brown lose nearly a quarter of his body weight. A professional magician, Brown met the doctor when he performed at a high school graduation party for Aronne's son. At the time, he was carrying about 290 pounds on his five-foot-seven frame—for a BMI of 45. "He approached me when I was at the buffet, where I shouldn't have been," Brown recalls, "and he said, 'Are you diabetic?' I said, 'Yeah.' " Brown had had a weight problem since the age of twelve—he credits his proficiency with magic for keeping him from being bullied as "the chubby kid"—and his eating habits were not what you'd call healthy. "I'd go to Nathan's and say, 'Let me have a hotdog with cheese and chili—give me three—and a soda with fries, and cheese on that too,' and I'd pull over and kill it and maybe want to go back for more," he says. "Or I'd go to Wendy's and get a triple-decker something. Or go to the Chinese restaurant and get General Tso's chicken with fried rice."

'After I lost thirty pounds, I decided to treat myself. So I went to the hamburger place in my neighborhood and ordered the triple-decker burger with bacon and everything on it, and after I ate half of it I said, "This does not even feel good." My body was rejecting it. I didn't want the rest.' That was two and a half years ago; by taking a prescription appetite-control medication and following Aronne's plan, Brown is down below 220. He's getting moderate exercise on a treadmill; eating healthy foods like salads, oranges, chicken, and tuna, as well as two daily protein shakes; and having reasonable indulgences, like the occasional slice of pizza with sugarless tea instead of a whole pie and a large soda. "It's not some miracle type of starvation diet; this is realistic," he says. "If I'd never met Dr. Aronne, I probably would be sick right now, and maybe over 300 pounds, because I didn't know how to go about eating properly—or I knew, but the willpower wasn't there. He was sent to me at the right time."

Brown once bought size 44 pants at big-and-tall stores; now he can fit into a 34. (He admits with a rueful laugh that Aronne told him not to get too happy about it, since he's wearing his pants below his stomach. Still, he says, "That's pretty good. Before, I couldn't get half a leg inside a 34.") He reports that his blood pressure is under control, he has more energy, and his headaches have disappeared; his goal is to get down to 175 or 180 and stay there. "After I lost thirty pounds, I decided to treat myself," Brown recalls. "So I went to the hamburger place in my neighborhood and ordered the triple-decker burger with bacon and everything on it, and after I ate half of it I said, 'This does not even feel good.' My body was rejecting it. I didn't want the rest, and I felt bad about it and I didn't eat it again. I thought, Why come all this way just to do this?"

Helping people adopt such long-term improvements in habits, tastes, and lifestyle is one of Aronne's missions. It's the antithesis of the sort of fast, dramatic weight loss chronicled in the reality TV show "The Biggest Loser," which Aronne holds up as a negative example. On the show, severely overweight contestants have been known to drop upwards of twenty pounds a week using methods he decries, like not drinking water for days before weigh-ins or doing inappropriate levels of exercise. "It sets up an expectation in the minds of our patients that they're going to lose that kind of weight," he says. "I can't tell you how many people come in and say, 'I did OK, but I only lost four pounds this week—it's not like "The Biggest Loser."'" He's also an outspoken opponent of fad diets, calling them ultimately destructive. "People come to us and say, 'I've tried everything,' but they've been trying things that have no scientific basis," he says. "And let's be clear that this is a health problem. This is like diabetes, hypertension, or high cholesterol, because this is the leading cause of those problems, and it should be managed with the same seriousness."