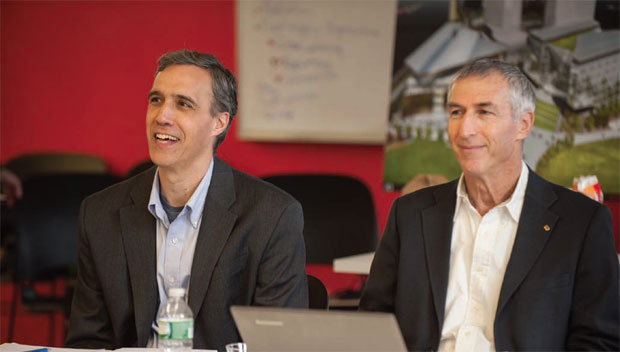 When Cornell was preparing a bid for the City of New York’s applied science competition three years ago, the Technion–Israel Institute of Technology was a logical choice for an academic partner. With Israel’s reputation as the “start-up nation” and the Technion’s history of producing the country’s leading tech entrepreneurs, Cornell knew there was a common vision.

Today the partnership between Cornell and the Technion is embodied in the Joan and Irwin Jacobs Technion–Cornell Innovation Institute, a key component of our new campus. In 2013, Irwin Jacobs ’54, BEE ’56, founding chairman and CEO emeritus of Qualcomm, and his wife, Joan Klein Jacobs ’54, shared the excitement about the potential synergy between these two institutions and made a generous gift of $133 million to create the Institute.

The Jacobs Institute brings together Technion’s expertise in leading applied research, tech transfer, and entrepreneurial success and Cornell’s exemplary research and teaching, entrepreneurial programs, and cultural drive. At the Institute, these assets are leveraged to spur economic development in New York City, creating a formidable catalyst for both local and global transformation in technology education.

The Jacobs Institute is designed to be at the forefront of creating new models for education and research that focus on the information-age transformation of key areas of the economy. The Institute includes professors from both the Technion and Cornell, who work side-by-side with industry leaders. This “sandbox-like” environment embraces experimentation and produces graduates poised to succeed in a fast-moving economy. The Institute departs from traditional academic approaches in several ways, including its approach to degree programs, which are focused on three interdisciplinary areas or “hubs,” selected for their timeliness and relevance to the New York City economy: Connective Media, Healthier Life, and the Built Environment.

The first Institute-sponsored degree program, an MS in information systems with a concentration on connective media, will launch this fall. The two-year program is designed to educate students to understand not only the technology behind our ever-expanding digital media, but the psychological, social, and business forces at play in today’s connected media. Students will graduate with both Cornell and Technion degrees, and the program will produce the next generation of talent to respond to, and drive, the digital transformation of publishing, advertising, news and information, personal communications, and entertainment.

This semester, the Jacobs Institute welcomed six postdocs to Cornell Tech for the launch of the Runway Postdoctoral Program, which provides recent PhDs with the opportunity to draw on their advanced research knowledge to launch new ventures. Technion Professor Uzi de Haan—a global leader in tech entrepreneurship and the founder of the Technion’s Bronica Entrepreneurship Center in Israel—is leading the one-year program. Cornell and Technion professors serve as academic mentors, but the aspiring entrepreneurs also meet regularly with those who can share their expertise in areas from law to venture capital. The inaugural group was selected from applicants around the world based on their academic and professional track records, their proposed enterprise, and their passion for launching start-ups. They are working on research and development projects in the fields of health care, e-commerce, and urban planning.

In addition to nurturing nascent entrepreneurs, the Runway Program stands out for piloting an innovative intellectual property (IP) model designed to make it as easy as possible for postdocs in technology fields to develop companies in a university setting. Typically, universities engage in substantial negotiations to license technologies developed on campus, a process that doesn’t reflect the realities of today’s technology start-ups. The new model developed by Cornell and the Technion positions the Jacobs Institute as an investor in companies that spin out of the program. It gives a company founded by a postdoc an exclusive, unlimited license to use the technology developed in the program in exchange for a stake in the company.

We expect such innovative new approaches to university-generated IP to become a model not just at Cornell Tech, but at other academic institutions around the world. It is an example of the powerful collaboration between Cornell and Technion to envision and create change in technology commercialization.

With the postdocs already hard at work and the Connective Media program launching this fall, we look forward to keeping you updated on the Jacobs Institute.

Adam Shwartz is director of the Joan and Irwin Jacobs Technion–Cornell Innovation Institute at Cornell Tech. Previously he served as chairman of the Department of Electrical Engineering at Technion.

For more on the progress of Cornell Tech, go to: tech.cornell.edu or follow us on Twitter@cornell_tech.