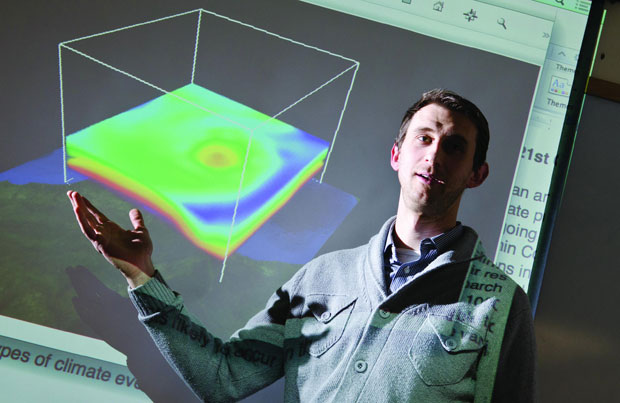 It sounds like the bad guy in a monster movie: Godzilla vs. Megadrought. Earth and atmospheric sciences professor Toby Ault has been assessing the likelihood that a massive drought—what he calls a “slow-moving natural disaster”—will strike the Southwest by the end of this century.

Ault has published two recent papers on the megadrought phenomenon, defined as a drought lasting at least thirty-five years. The first, which appeared in the Journal of Climate last summer, focused on precipitation levels and put the chances at 30 to 50 percent. A more recent study that he coauthored, published in Science Advances in February, also factored in rising temperatures —and predicted the likelihood at 70 to 80 percent, and possibly even higher.

Cornell Alumni Magazine: Historically, how often do these megadroughts happen?

CAM: California has been facing drought conditions for the past few years, including controls on water consumption. Could they be at the beginning of a megadrought?

T.A.: Ask me again in thirty-one years. For the most part, our skill at weather forecasts is pretty low any longer than ten days into the future, so we can’t say with confidence if this particular drought will last for many years.

CAM: We had a terrible winter in the Northeast. Were our heavy snow and freezing temperatures somehow related to the hot, dry conditions out West?

T.A.: They are connected. We really have a bipolar continent right now, and the reason is that there’s a standing wave in the atmosphere. The crest, the high part of that wave, has parked itself off and over the western part of the continent and that blocks storms from reaching California. In the meantime, the other half of that wave is a trough, a low—and that favored storms coming down and dumping snow and cold air in the Northeast, week after week.

CAM: It seems obvious, but does the increased megadrought risk come down to climate change?

T.A.: It does. It’s because of greenhouse gases warming the atmosphere, driving down precipitation inputs and driving up evaporative losses. So overall, the moisture balance will go down by 2050 and beyond.

CAM: As a society, what can we do about it?

T.A.: One of the obvious things is to get our emissions under control, because the less carbon dioxide that gets into the atmosphere, the lower the risk. But that’s a huge, complicated, geopolitical problem, and my role is not to make any specific policy recommendations. My area is to communicate the science as best I can—but I do think we should know what the risks are if we’re going to warm the planet by several degrees.

Another side of the story is to continue to have discussions about how to use water in the West, and nationally. How do we protect this precious resource that we use for producing energy, growing crops, watering lawns, and generally having a healthy, thriving society? Those conversations need to be had with the public, water resource managers, politicians, and scientists alike.

CAM: On a practical level, does doing this research affect the way you think about turning on a faucet?

T.A.: It totally does. Every glass of water I drink, I think about how incredibly precious this resource is, how undervalued it’s been, and how much more we need to think about its wide importance throughout society. In this country, we are literally flushing drinkable water down the toilet.

CAM: Is studying a potential long-term natural disaster like the megadrought kind of, well . . . depressing?

T.A.: Sometimes. But I have to maintain a hopeful outlook about our capacity as a creative and ingenious species—to believe that there are ways to thrive despite the risk of megadrought and of climate change. So I think there’s room for cautious optimism. I do have a funny anecdote from my mother-in-law, who lived in New York during the drought in the Sixties. She remembers that there were signs on the subway that said, “Save Water—Shower with a Friend.”