In late May, CAM’s longtime art director is heading into a well-deserved retirement. Steffi Green joined the magazine full time in 1987 —back when our offices were located in Alumni House and layout involved a giant typesetting machine, liquid wax, and a scalpel.

In her nearly three decades at CAM, Steffi oversaw the design of more than 200 issues and personally art directed thousands of stories. As she retires, we asked her to take stock of this remarkable body of work; these pages showcase just a few of her favorite covers and feature stories. 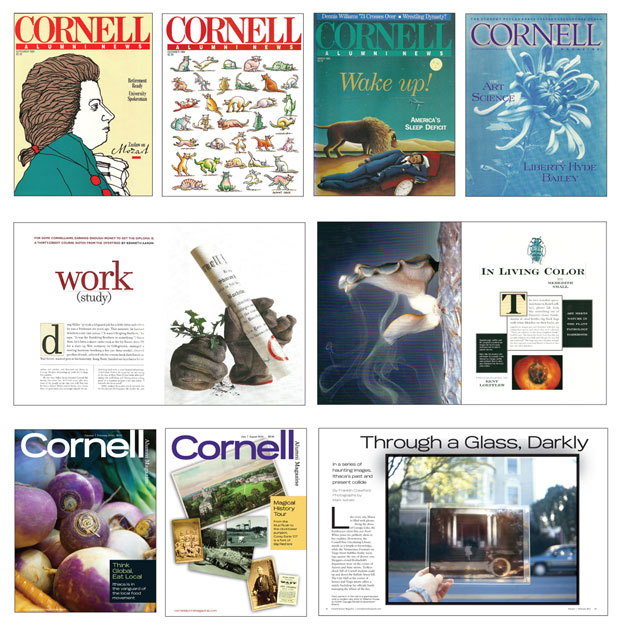 A collection of Steffi’s favorite layouts and covers.

Steffi earned a BFA from Pratt Institute in Brooklyn—a school whose motto, appropriately enough, is “Be true to your work, and your work will be true to you.” She came to Ithaca in 1980, eventually becoming a manager at Cornell’s Media Services office. When she joined CAM, the magazine was led by the legendary John Marcham ’50, the first of five editors for whom Steffi worked. Under her guidance, CAM has evolved into a visually interesting, reader-friendly periodical that can stand head and shoulders with its newsstand counterparts; during her tenure, the Council for Advancement and Support of Education (CASE) twice named us the best alumni magazine in the country. “I’ve always loved the idea of collaboration with my colleagues—that’s the most satisfying part of the job,” she says. “When you finish an issue, you hold it in your hands for a minute, and the next thing you know you’re onto the next one. It’s working with the people at the magazine—the editors, illustrators, and photographers—that has made it so gratifying, and such wonderful fun.”

Over the past five years, Steffi has gotten heavily involved in performing and studying music of the Renaissance and Baroque periods, a passion she aims to pursue in retirement. She plays recorder in two trios, practices faithfully, and has traveled internationally to early music gatherings. At lunchtime, she’d sometimes sequester herself on the third-floor stairs of the CAM office building to practice, and we’d hear her dulcet tones wafting down the hall. (“It’s concrete,” she says of the stairwell, “and the acoustics are great.”) Our staff will miss that—and so much more.