Sociology professor Matthew Brashears calls it the “Ikea problem.” In a nutshell: just because you have the instructions for how to put something together doesn’t mean you can actually make it work.

The phenomenon is all too familiar to frustrated fans of the Swedish chain’s assemble-it-yourself furniture—but Brashears cites it in regard to a weightier subject. When it comes to building a weapon of mass destruction, he says, the notion that terrorists can just download instructions off the Internet doesn’t hold water. To make what’s known as a CBRN weapon—one that is chemical, biological, radiological, or nuclear—requires what’s known as “tacit knowledge,” which is skill and familiarity with a subject that can only be gained through training and experience. And that, Brashears says, may someday give intelligence agencies a way to prevent such devices from ever being built. 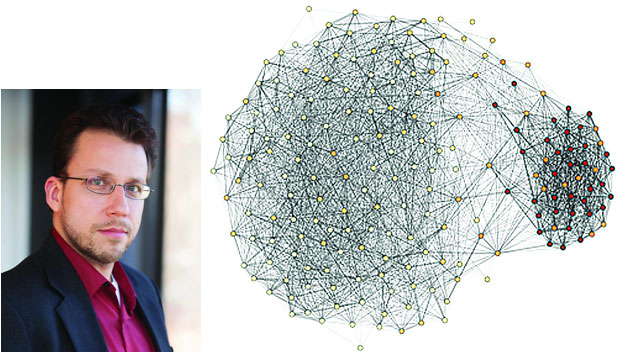 Linked in: Professor Matthew Brashears (left) is studying how social groups such as terrorist cells recruit members. The drawing above illustrates his findings that when a subset of people are radicalized (as seen in the small, darker cluster at right) it weakens their connections to the larger community (seen at left), making it harder for the group to expand. Photo: Linsday France/UP

“If you were Al-Qaeda and you got your hands on enough weapons-grade uranium to build a nuclear bomb, would you hand if off to some guy and say, ‘See what you can do with this’—or would you recruit somebody who knows what he’s doing?” Brashears says. “What these organizations really want is somebody who has accumulated this tacit knowledge. And people who have this kind of knowledge are quite rare; there are still lots of them, but compared to the population at large, it’s very few.”

That principle is at the heart of Brashears’s ongoing research. In 2010, he received a nearly $800,000 grant from the Defense Threat Reduction Agency to explore methods of identifying the social networks that connect terrorist groups aiming to deploy CBRN devices with the experts capable of creating them. In 2014, the agency—an arm of the Defense Department—found the work promising enough to give the project an additional award of almost $630,000. “We’re not at all interested in motivations here,” Brashears says. “The reasons to participate in a terrorist group are very heterogeneous. It could be that you help Al-Qaeda because you agree with them; it could be that you don’t agree with them, but you don’t like the U.S.; it could be that they’re paying you a ton of money; it could be that they kidnapped your kids. We have no earthly idea. Our only point is that if you’re at a short social distance, it’s more likely that somebody in that particular group will become aware of you and your expertise.”

Brashears stresses that he’s studying social networks—the connections among people—and not social networking, as in Twitter and its ilk. It’s a common misconception—so much so that he jokes about making up T-shirts that say “No, actually, I don’t study Facebook,” and handing them out to his colleagues at the next meeting of the International Network for Social Network Analysis. Neither is his work focused on the recruitment of jihadist foot soldiers—as in the high profile cases of teens lured from homes in the West to join ISIS and other groups—but rather on understanding how people with CBRN expertise may come into contact with terrorists who want to exploit that knowledge.

The grant that Brashears received is on what’s known as a 6.1 line, earmarked for general science that could eventually be applied to defense operations. And in fact, his team is basing its work on a data set unrelated to terrorism: the National Longitudinal Study of Adolescent Health, which includes self-reported information on illicit behavior like drug sales and violent crime. As a stand-in for membership in a terrorist group, the researchers are looking at gang affiliation. “We have data on a subset of individuals who are in gangs and involved in serious deviance, mixed in with a much larger set of individuals who are not doing these things but look a lot like the gang members demographically,” Brashears explains. “It gives us a test data set where we have a signal —those gang members we want to find—mixed in with a lot of similar individuals who represent noise.”

Why not use data on actual terrorists? For one thing, Brashears says, there’s no guarantee that such data would be accurate or complete—and, frankly, it’s not that useful to base a novel method on data about terrorists who’ve been caught through conventional means.

And those means, he adds, are often problematic, relying on the kind of racial and ethnic profiling that concerns civil libertarians. The system that Brashears is working on would use demographic factors less inflammatory than race or religion, such as education, age, income, and organizational membership. Those factors can be used to place someone into a sociological context known as “Blau space,” a tool that establishes spatial coordinates based on a person’s sociodemographic characteristics. The closer two people are in that conceptual space, the closer they are in terms of real-world social connections. “It can’t identify the specific individuals, but it can identify a subset who might be at risk for joining terrorist organizations,” says Michael Genkin, PhD ’14, who helped found the project as a grad student and now teaches sociology at Singapore Management University. “It would be overpromising to say that you can pick out, out of millions of people, those who will join terrorist organizations. But this can identify them better than existing methods—and that’s important, because we’re all concerned with racial profiling and the problems it raises. This method is able to do it in a cleaner way without victimizing innocent persons, and identify bad guys more precisely.”

An example of the phenomena that the research is exploring—close Blau space connections used for nefarious purposes—can be found in an unlikely place: the hit TV drama “Breaking Bad.” On that show, high school teacher Walter White has tacit knowledge in chemistry that makes him a talented maker of methamphetamine—but he doesn’t go into a life of crime until he teams up with a former student, Jesse, who’s involved in the drug trade. “When Walt was looking for someone to help him, he didn’t hook up with the cartel directly, or any of the various ethnic gangs,” Brashears says. “He basically ended up with another white male from a middle class background. There’s a lining up of demographic characteristics that mean that Walt and Jesse are much closer in social space than you might think.”