Animal shelters—“dog pounds”—used to be America’s dirty secret. In 1970, the nation euthanized 24 million shelter pets, but this year the number is projected to drop to 3.7 million. Philanthropist David Duffield ’62, MBA ’64, hopes that as early as 2015, no healthy, adoptable animal will die for lack of a home—and he’s invested $300 million to make it happen. A key part of realizing this “no-kill nation”: helping vet schools train future DVMs to address the medical and behavioral needs of shelter animals— and Cornell’s Vet college is on the cutting edge of this shelter revolution.

As more humane organizations aim to eliminate euthanasia, the Vet college is training future DVMs in the art and science of caring for homeless pets

On a Wednesday night in late January, the Tompkins County SPCA seized 100 pets that had been crammed into a one-bedroom trailer in rural Brooktondale—fifty dogs, thirty-six cats, and assorted rats, chinchillas, and guinea pigs. Into the wee hours of the following day, animal control officers continued to transport vanload after vanload to the Ithaca shelter in various states of ill health and neglect. The SPCA, a nonprofit already responsible for the care and feeding of some 300 animals at any given moment, needed to make room for them—and fast. "We had to house these animals in a sustainable manner," recalls SPCA director Abigail Smith. "We knew we'd have them for weeks." 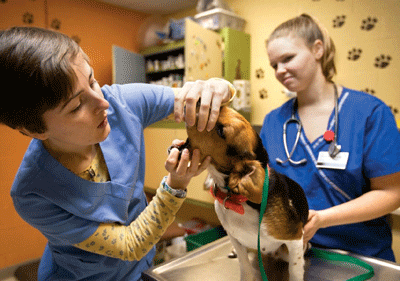 It was just luck that it all culminated on a Thursday morning—the time when students in the Cornell Vet college's community practice course come in for training in the specialized art of shelter animal care. It was all hands on deck, and the SPCA put them to work. "We had to turn the field services office into an animal space where we wound up housing maybe twenty cats," Smith says. "The students moved banks of cages, set them up, fed and watered the animals, got their litter boxes set. We had to temporarily house dogs in giant airliner crates—they all had to be disinfected, washed down, treated, set up, and the animals moved into them. The students rotated the dogs out, took them for walks, cleaned their cages, fed them. It was triage, really—setting up a temporary base camp. It was like a disaster hit. Everybody had to get attention, food, and a place to live within a few hours."

Smith calls the students "a tremendous help"—and when things returned to some semblance of normalcy, she phoned Vet college epidemiology professor Jan Scarlett to tell her as much. As Scarlett said a few weeks after the mass seizure: "Talk about a teachable moment."

It used to be that animal shelters—"dog pounds"—were America's dirty secret. According to figures from Maddie's Fund, the pet-rescue foundation created by David Duffield '62, MBA '64, and his family (see sidebar), in 1970 the nation euthanized 24 million shelter pets—81 percent of the shelter population, or 115 animals for every 1,000 Americans. By 1996, thanks in large part to increased spaying and neutering and more stringent animal control laws, that number had fallen to 6 million—58 percent of shelter animals, or twenty-three per 1,000 people. In 2010, Maddie's Fund projects that the news will get even better: 3.7 million euthanized, representing 45 percent of shelter animals, or twelve per 1,000 Americans. The fund's goal is to reduce that number to 700,000 by 2015—meaning that no healthy, adoptable animal will die for lack of a home 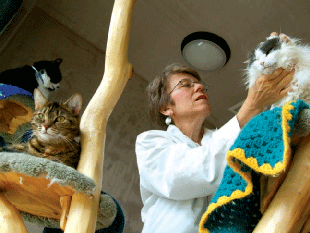 A key part of realizing what supporters call a "no-kill nation" is training future veterinarians to address the particular medical and behavioral needs of shelter animals—a field in which Cornell has been in the vanguard. A decade ago, the Vet college offered the nation's first course in shelter medicine, initiated by Scarlett and the ASPCA's Lila Miller '74, DVM '77. "What makes shelter medicine unique is that while we've always done a great job at training individual animal veterinarians, we haven't really had to do much in terms of the population perspective for dogs and cats," says Scarlett. "Most private owners have one or two or three dogs, not a hundred. When you have that many animals, you're suddenly like the large animal practitioners where you treat herds of cows, flocks of sheep. You have to worry not only about the individual animal's health, but the population-level health."

A former SPCA board member, Scarlett is director of the Maddie's Shelter Medicine Program at Cornell, founded in 2004 and funded by two grants from Maddie's Fund totaling $1.75 million. Thanks to the fund's support, Scarlett says, Cornell is now one of a handful of schools with comprehensive offerings in shelter medicine. (The Duffields' foundation also funded the first, at the University of California, Davis.) Here, all students are exposed to the field as part of their core curriculum, including mandatory visits to the SPCA; those with a stronger interest can opt for three electives in the subject and join the school's Shelter Medicine Club, which hosts regular SPCA visits and lectures on subjects like rabbit health or animal cruelty. "It's a critical component of what is a national movement gaining momentum in terms of shelters turning the corner toward a no-kill philosophy," Smith says. "To achieve that, there have to be veterinarians, either in the community or in the shelters themselves, who understand how to work with animals in that environment." 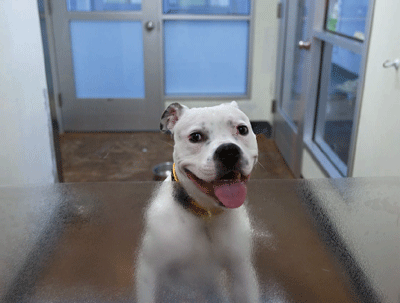 The college also conducts research and trains DVM residents in shelter medicine, offering a certificate in the field. (Shelter medicine is not yet a board-certified specialty or subspecialty; Scar-lett is on a national task force exploring such certification, and in the meantime Cornell's residents are examined by the American Board of Veterinary Practitioners.) Through the program, the Vet college provides medical services to the shelter such as physicals on newly arrived animals, as well as behavioral consultations; it also offers expertise in everything from institutional hygiene to disease management, not only to the Tompkins County SPCA but other facilities in the region.

"In a shelter, every day we're thinking, How can we prevent infectious diseases, and how do we manage them if they arise?" Scarlett says. "What disinfectants do you use? In shelters, that's very important. Ventilation—how much air are you moving? What's the humidity level? The longer infectious disease agents linger, the more animals come in contact with them. Another component is behavior, because those issues—and they may be normal behaviors, like scratching—are a leading reason why people surrender animals to shelters; they don't want them ruining their furniture or urinating outside the box. And another component is enrichment. Both dogs and cats can deteriorate in shelters because they're in small cages, or even in colony housing. If they don't have forms of enrichment, of keeping them mentally active, they get stressed—and we know that stress feeds into physical health as well." 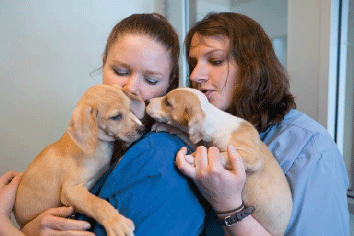 Laurie Duffield Peek, DVM '96, director of veterinary programs for Maddie's Fund, notes that when she was a student, there was no such thing as a shelter medicine course. "Shelter medicine is becoming a more important field as shelters are holding animals for longer periods of time," she notes. "In the Seventies and Eighties, shelters had so many animals coming in that they were processed through the system in a matter of days to hours, and euthanized. Intake has dropped dramatically, and that has afforded animals a longer length of stay. But that has brought other issues—because the longer an animal is in the shelter, the more likely it's going to get sick."

Both Peek and Scarlett say that another driving force in establishing shelter programs at vet schools is student interest. Scar-lett notes that all applicants must have some form of vet experience before coming to Cornell; these days, more and more of them have gained it at humane organizations. "The college is also seeing the benefits of working with shelters," Peek points out, "because students are seeing cases that they may not see in private practice." 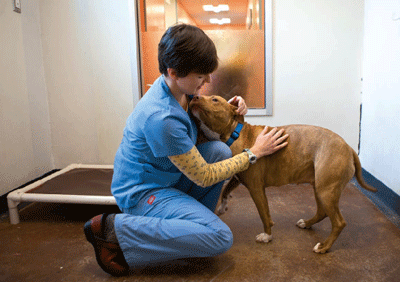 On a Thursday morning in mid-February, three students on their community practice rotation go to the shelter for lessons from Kelley Bollen, the program's animal behaviorist. First, they gather on folding chairs in the shelter's employee kitchen, where Bollen gives them a basic grounding in the field's realities—from the regional differences in dog and cat overpopulation to the fact that noise levels in dog kennels have been measured to be roughly equivalent to that of a jet engine.

"How many animals enter U.S. shelters every year?" Bollen asks them. They throw out numbers: A million? Two million? Five?

"It's 8 to 10 million," she says. "How about if I tell you it's 22,000 a day? Does that put it in a little more perspective?" About half are euthanized, she tells them—for lack of space, adopters, and money. "Most people don't realize the severity of the problem—you guys are vet students, and you didn't know," she says. "And why do so many animals enter shelters? The number one stated reason is, 'We're moving.' "

She quizzes them on the three different types of shelters: traditional, no-kill (also called "adoption guarantee" to avoid the notion that others are "kill" shelters), and municipal, the latter being primarily devoted to animal control. She points out that the term "no kill" is not strictly accurate; even those shelters euthanize animals that are deemed unadoptable due to health or behavior problems. She also notes that the vast majority of "no-kill" shelters limit the number and type of animals that they admit, only taking in those they can adopt out. The facility they're sitting in, however, is a hybrid: not only no-kill but also open admission. "Tompkins County is a unique shelter in our country," she says. "It's unheard of in the no-kill arena."

Bollen, who has a master's in animal behavior from UMass, spent four years working for the Massachusetts SPCA; among the anecdotes she shares with the students is the day that the agency had sixty-seven cats surrendered within four hours. After a forty-five-minute discussion, she takes them on a tour. They go down to the basement, where feral cats are kept as part of a program in which they're trapped, sterilized, and returned to their original location. She describes the measures that have been taken to keep the animals calmer and more comfortable: the cages are on tables rather than on the floor, each cat has a box to hide in, and towels are draped over the cages so the animals can't see each other.

From there, they go back upstairs to the room where cats are housed while they're being treated or evaluated before moving to the new adoption center. "Look around," Bollen instructs, "and tell me the stressors for cats." The students chime in: Some of the cages are on the floor, not up high as cats prefer. Cages face each other, with no visual barrier between the animals. The cats have little to interest or stimulate them. It's a high-traffic area, with dogs being walked through on their way in and out of the kennel.