It was a Greek philosopher, Socrates, who believed "the unexamined life is not worth living." And it was the son of French Canadian immigrants, Jack Kerouac, who opined, "The road is life." Some combustible combination of the two notions is the spark of my mission.

I have decided to let Homer ride shotgun. It was he, a supposedly blind minstrel nearly three millennia ago, who crafted the original hero's journey. Odysseus's was a practical quest— return home to his beloved isle of Ithaka after twenty years of war and wayward travel. But at its heart, the voyage of Odysseus represents an intellectual adventure. For all the gods and monsters he encounters, his is a pilgrimage toward an understanding of humanity.

In the course of his adventures, Odysseus lies, steals, and schemes. He can be clear-minded and determined and remarkably courageous, but at times he is also distrustful and devious and hypocritical and merciless. He is not a particularly successful leader: his men often ignore his warnings and pay dearly for doing so, and he loses every single one of his ships and crew. Even physically, Homer describes Odysseus as unimposing. By the time of The Odyssey, he is probably well into his forties, maybe with bags under his eyes from his constant travails, possibly out of shape. Even one-eyed Polyphemus calls him a "short worthless-looking runt." You know you are no physical marvel when you are dissed by a Cyclops.

So Odysseus is the prototype of not only the hero, but also of all flawed fictional heroes who followed. He is why Superman falls prey to kryptonite and Sherlock Holmes prefers his 7 percent solution and Indiana Jones hates snakes. And for a guy like me— somewhat vertically challenged, battling a paunch, not always taking the high road—his is a template to which I can relate.

Come to think of it, my imperfection has been immortalized. You see, there is one final addendum to my "Who Wants to Be a Millionaire?" tale. A few weeks after the silliness subsided, the phone rang. It was a fellow from Grolier, the folks who publish the Encyclopedia Americana. They were putting together the Americana Annual, a six-hundred-page recap of the events of the year 2000. Could I write 800 words about the history of quiz shows and the current craze? Sure, I said, only a tad reluctantly. At least it's one way to get into the encyclopedia. The lesson: when revealing aspirations, be specific. 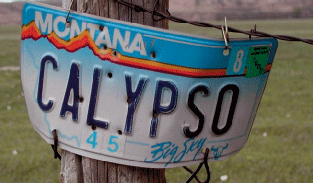 Several months later, the volume arrived, a handsomely bound yearbook with Al Gore and George Bush awkwardly shaking hands on the cover. Squeezed in between an account of "Monkeys in Peril" and a spread about tall ships was my summary of quiz show history. To my surprise, the article began with a half-page color photo of my final moments on the "Millionaire" set. So in perpetuity, anyone can turn to page 90 of the 2000 Americana Annual and catch the forever frozen image of me sitting in the hot seat, smiling wanly at my old pal Regis, having just failed a test of courage.

Brad Herzog '90 will sign copies of Turn Left at the Trojan Horse during Reunion Weekend—at the Cornell Store's alumni author event from 11 a.m. to 1 p.m. on Saturday, June 12, and at Buffalo Street Books, 215 N. Cayuga St., Ithaca, at 4 p.m. on Sunday, June 13. For more information on Brad Herzog's books, go to www.bradherzog.com.