It’s not easy to find Niraj Shah ’95 and Steve Conine ’95 among the rows of desks at the Boston headquarters of Wayfair, the massive online retailer of furniture, housewares, and home décor. At lunchtime, most of the identical chairs—an ergonomic model by Herman Miller that is one of 2,542 office chairs for sale at wayfair.com—are occupied by young people wearing earbuds as they tap at their keyboards in between bites of take-out sandwiches. Shah might be the co-founder and CEO, but he, too, is eating at his desk, a few spots over from a wall of windows in the vast open office.

“Gross!” teases Conine, the company’s other co-founder and its chief technology officer, whose own desk sits across from Shah’s. It’s an unpretentious arrangement, more appropriate to a scrappy start-up, that belies Wayfair’s October debut on the New York Stock Exchange with an initial public offering that raised $319 million. But Shah and Conine, who met as high school seniors at Cornell Summer College, tend to downplay that achievement. “We went public on a Thursday, and Friday was a hangover from that, but by the next week everyone was back to work,” says Shah. “We caution people; it’s such an external, visible marker of success, it’s easy to take your eyes off the ball.” 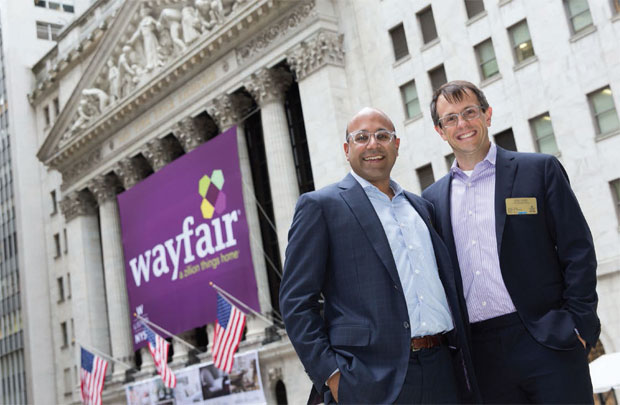 That ball is a company with more than 2,000 employees that sells some 7 million products, using a novel set of algorithms to manage 7,000 suppliers that peddle everything from chandeliers—an Art Deco chrome-and-crystal one goes for $473—to tea kettles (the site’s most popular whistling model is priced around $27). “Home is a very big market, and we think we can be a very big player,” Shah says. “We want to be the company for home goods.”

Shah, every inch the tech CEO in his slim-fitting blazer and dark denim, and Conine, an affable geek who bears a passing resemblance to a young Bill Gates, have been friends for nearly a quartercentury. They’ve come a long way from the days when it was easy to take risks because, as Shah puts it, “all you needed was a roof over your head.” Both are now married with school-age children, and Conine is a competitive mountain biker who travels frequently for international races. But while the IPO has made them both multimillionaires, they don’t plan to cash out any time soon. “There are probably a lot of entrepreneurs who see an IPO as an exit,” Conine says. “We definitely both have a very long view. I love what I’m doing.”

Shah and Conine have been business partners since senior year on the Hill, when the two engineers took an entrepreneurship course together and teamed up on the final project. The result was an IT firm called Spinners, which pitched Webdevelopment services to Ithaca’s small businesses. (“Most of them were like, ‘What’s the Internet?'” says Conine, noting that it was, after all, 1995.)

The pair already had post-grad plans, but after they signed up several customers, including a local music store and an Ithaca vineyard, they began to take their class project more seriously. “When Niraj deferred his admission to law school, it was like, ‘Oh, we’re really doing this,’ ” Conine says. The summer after graduation, they landed the National Business Aviation Association and Time Warner as clients, and started to make real money. In 1998, Conine and Shah sold Spinners to iXL, an international consulting firm, for $10 million. The deal included jobs for both of them, but they soon tired of corporate life and teamed up again in 2001 to start a software company called Simplify Mobile. It was less successful. “We banged away at it for about a year,” Conine says. “We came out of the first business thinking we had knocked it out of the park; we’ll go do it again. The second business was humbling.”

They didn’t give up. After selling Simplify’s software, Conine and Shah were unemployed and hunting for another project when they discovered a quiet corner of the Web that had survived the circa-2001 dot-com bubble. Niche websites selling things like bird houses (Wayfair offers an Audubon-approved cedar bluebird model for $26.90) and grandfather clocks (a sixfoot solid hardwood version goes for $249; order now and get free delivery) were doing a steady business in wares that were too esoteric for brick-and-mortar stores to carry a wide selection. “But nationally,” says Conine, “there was a very high demand for this stuff.”

Conine and Shah started buying up descriptive domain names, beginning with “racksandstands.com” and moving onto “allmetalbarstools.com” and some 200 others, basing their new ventures on popular online search terms. (Says Shah: “Some were really narrow—too narrow, like ‘allroosterdecor.com.'”) These Web storefronts were combined under the umbrella of CSN Stores, which by 2011 was making $500 million in annual sales. That year, after securing venture capital funding, the company rebranded itself as Wayfair. In 2013 sales approached $1 billion, and Wayfair now offers real competition to a certain e-commerce behemoth.