With a pair of image-sorting projects, researchers tap the public consciousness

The Eiffel Tower, the Coliseum, Big Ben—and the Apple Store? The cube-shaped glass building on Manhattan's Fifth Avenue is among the thirty most-photographed places in the world, according to researchers in the Engineering college. A team of computer science professors and students is collecting millions of images posted by more than 300,000 people on Flickr, the online photo-sharing site, to build searchable albums with the potential to become a massive global travel guide. "If you tried to go to the Web without a search engine, it would be impossible to find anything, and that's the situation with photos," says lead researcher Daniel Huttenlocher, dean of the Faculty of Computing and Information Science. "Our goal was to make them navigable." The project began nearly two years ago; the group presented its report, "Mapping the World's Photos," at a World Wide Web conference in Madrid in April. 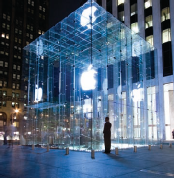 At Cornell's Center for Advanced Computing, the researchers used a supercomputer—the equivalent of 500 desktop machines, linked by software, running 1,000 times faster than a laptop—to collect information about each photo's time, date, and geographical location. From that data, they compiled a list of the most frequently photographed cities (the top three are New York City, London, and San Francisco) and landmarks (the Eiffel Tower, followed by London's Trafalgar Square and Tate Modern museum). Huttenlocher envisions that a Web travel guide could be organized by destination popularity—the first of its kind based on "planetary-scale data," the team wrote in its report. "You can buy a travel guide, but it was written by one person who decided what was worthwhile to see," Huttenlocher says. "This is the crowd-sourcing version."

Huttenlocher says that the research could generate interesting data about how people travel through the same spaces. For example, by looking at sequences of photos, researchers could construct the pathways travelers take through cities or regions; a repeatedly photographed sequence could suggest a scenic drive along a highway or a walk through Central Park. The data, the researchers say, offers "a fascinating picture of what the world is paying attention to."

To help ornithologists study birds, pick up a mouse—your computer mouse. The Cornell Lab of Ornithology has launched an online program called CamClickr to invite the public to help sort the ten million images it's collected since 1999 from Web cameras hidden in nests across the country. Backed by a National Science Foundation grant, CamClickr— which feels more like a game than a scientific tool—took flight this summer as the lab's newest citizen science project.

CamClickr aims to teach the public about bird biology while helping researchers with legwork, says ornithologist Tina Phillips, the project's leader. "We've collected data over such large time and geographic scales," she says, "one scientist couldn't sort through it all in his or her lifetime." Players might begin with a set of "NestCam" images of Eastern bluebirds. At level one, they sort them into categories based on the number of adults and chicks; at level two, they tag them to describe the birds' postures and positions. The tags describe only observable behaviors—to avoid players guessing, for example, whether an open mouth signifies crying or eating. After completing each level, players earn points and are entered in raffles to win prizes like binoculars and bird posters. "People are finding it fun and addictive," Phillips says. "They don't realize they're becoming animal behaviorists." 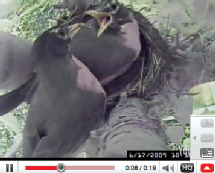 Phillips's goal is to turn CamClickr into a searchable database so that students, scientists, and the public can research specific birds, from the ubiquitous robin to the rare chimney swift. Because users may tag the same image differently, those included in the database will require a consensus of four out of five users. The lab will run the program until all ten million images have consensus tags; more than 200,000 have been completed so far. Cam-Clickr's 1,500 to 2,000 contributors include conservationists, bird-watching novices, and the lab's most enthusiastic group of NestCam followers: the "Owl-coholics." "Some play because they want to be altruistic in their relationship with the lab," Phillips says. "Some play because it's their only access to nature. And some do it because they can't get enough."