Last fall, during a long-overdue cleanout of CAM’s offices in downtown Ithaca, we came across a striking black-and-white aerial photo of campus; pasted onto a poster-sized sheet of cardboard, it had stood unnoticed in a corner of our library for years. Our staff was immediately captivated. We pored over the image—which proved to date from the 1930s—and had a blast identifying iconic structures, marveling at vast empty spaces that future construction would fill, and scrutinizing buildings that have since been demolished.

That photo captures one moment in the evolution of an ever-changing campus. We knew that there were more, of varying quality and sharpness, taken over the course of the past century. So we gathered the images featured in this story and invited University Archivist Emerita Elaine Engst, MA ’72, to help us parse the notable changes from one photo to the next. It proved to be more challenging than we’d expected—not only because of the dense trees that once graced much of East Hill, but because even well-loved buildings normally seen at ground level can seem oddly unfamiliar when viewed from the air.

Sage Chapel dominates this panoramic photo, taken from atop Sage Hall in 1880—before East Hill gained its iconic clock tower. Behind the chapel—seen here before several additions that began around the turn of the twentieth century—are the three original Arts Quad buildings: Morrill, McGraw, and White. Across the road are a few of the many faculty houses that once dotted campus before they were demolished to make way for new construction.RMC

Found in a 1920 campus guide, this shot by prolific University photographer John Troy was taken, as its caption notes, “from a Thomas-Morse airplane at 3,000 feet.” By then, Cornell had taken much of its familiar shape, including such landmarks as the clock tower, Schoellkopf Stadium (minus the Crescent), a significant number of the Ag Quad’s structures, and Goldwin Smith, Barton, and Bailey halls. Just left and down from the photo’s midpoint is the original Armory, which was demolished in the Fifties to make way for the Engineering campus. Just above Barton are the buildings that then housed the Vet college (and are now home to ILR). Immediately to the upper right of the clock tower is Boardman Hall, the Law School’s original site; it was also torn down in the late Fifties, amid controversy, to allow for construction of Olin Library. Collegetown occupies the lower right corner of the image.RMC 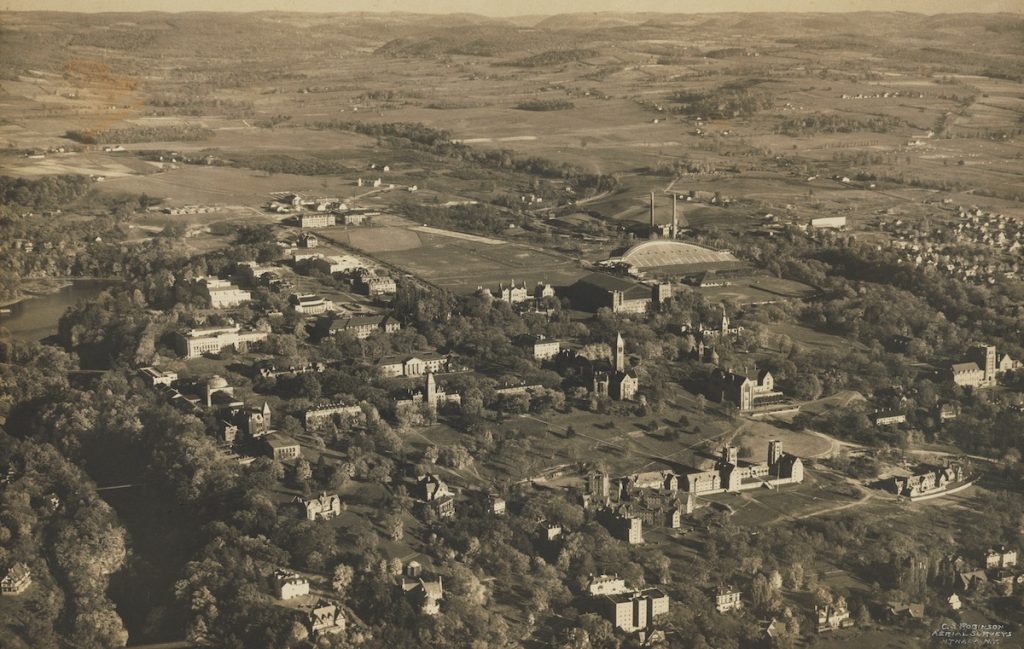 Several of the University’s iconic stone edifices had risen by the time this photo was taken by a commercial aerial photographer—including Willard Straight Hall (seen at right of center), the War Memorial (just below the Straight), and the Law School’s Myron Taylor Hall (at far right). West Campus dorms, including Baker Court, had begun to emerge. Baker Lab stands near the edge of Fall Creek Gorge at center left, with Martha Van Rensselaer just above it. Schoellkopf now has its iconic Crescent (built in 1924)—between baseball’s Hoy Field and the twin smokestacks of the campus heating plant—and the Ag Quad has filled out with the construction of Plant Science. Stocking Hall (center left, at the edge of the open field) was then at the far reaches of campus.C.S. Robinson Aerial Surveys 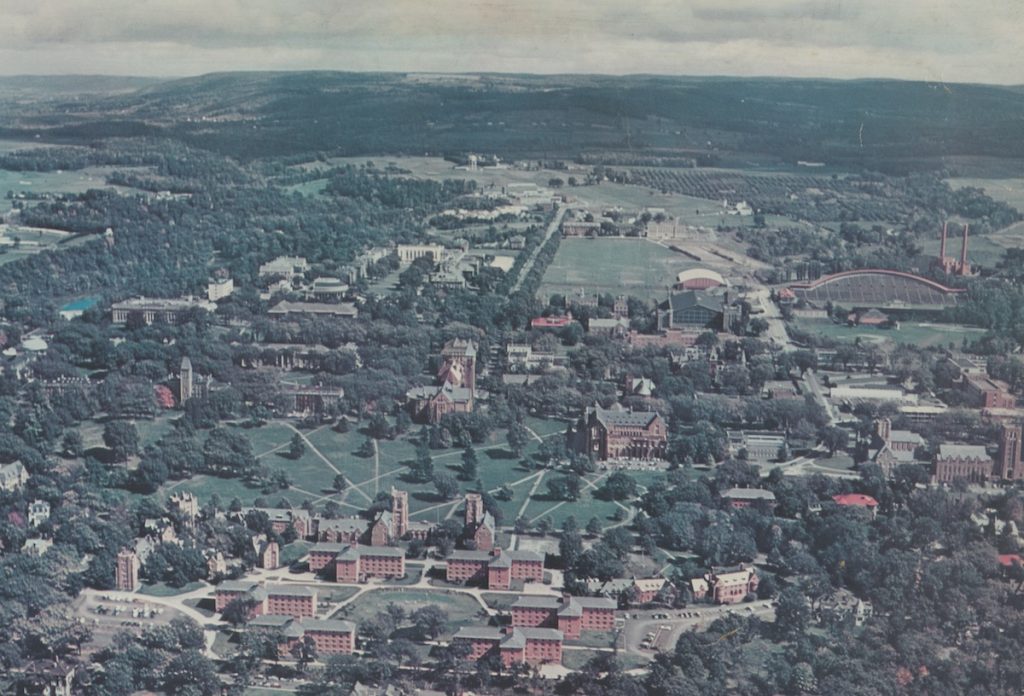 The U-Halls, built to accommodate the postwar influx of undergrads studying on the G.I. Bill, dominate the lower half of this photo—which we also found in CAM’s offices (with a note that it had been gifted to us by the late Bill Vanneman ’31, a dear friend of the magazine). Mann Library now stands at the far end of the Ag Quad, the Engineering Quad is starting to take shape, and Lynah Rink’s distinctive curved white roof can be seen just left of the Crescent. The campus health center, then known as Gannett Clinic, is to the right of the Straight; to the right of that is Anabel Taylor Hall, now home to Cornell United Religious Work. But with the trees in full leaf—in the years before Dutch elm disease decimated much of the campus’s original greenery—many buildings are difficult to spot, including structures like the A.D. White House and the Big Red Barn.Provided 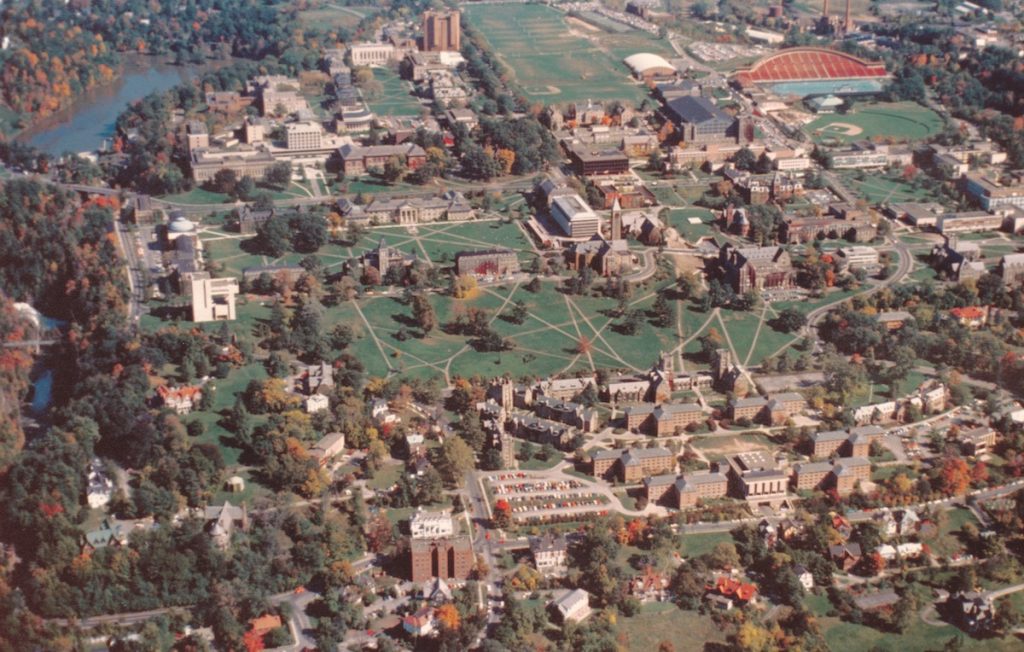 The Johnson Museum of Art—designed by famed architect I.M. Pei and affectionately nicknamed the “Sewing Machine”—is one of the most dramatic additions to campus seen here. Another: Bradfield Hall, the eleven-story tower (to the right of Mann Library) that’s notable both for being the tallest building in Tompkins County and for almost entirely lacking windows. Olin Library has taken its spot on the Arts Quad; the rust-hued Uris Hall occupies a corner of East Avenue and Tower Road. To the upper left of the Straight is the entryway to the Cornell Store; while it was originally designed to be entirely underground, in the end it was nestled partway into the hillside. At far left is a glimpse of another campus icon: the Suspension Bridge, built in 1961.RMC 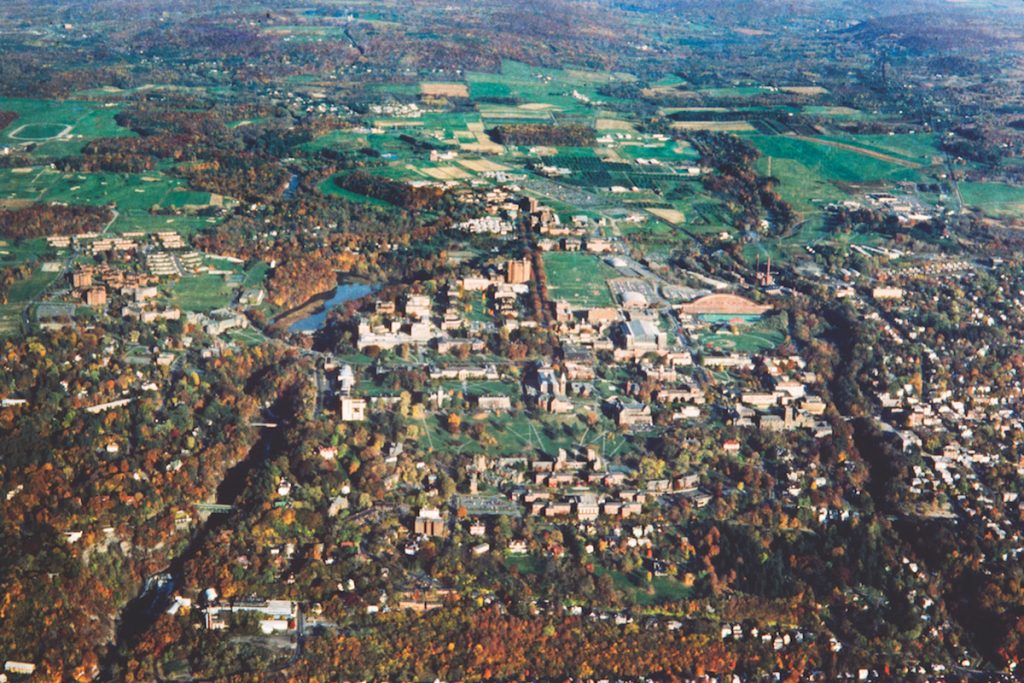 While North Campus development had begun long before this photo was taken—starting with Risley and Balch halls in the early twentieth century and continuing with Clara Dickson, Helen Newman, Robert Purcell, the High and Low Rise dorms, and more—this image offers a comprehensive view. Tower Road has continued to fill out with the addition of CALS’ connected Corson and Mudd halls, just above the ILR campus. On the right side of the photo—just above the Law School and to the left of Collegetown’s Cascadilla Gorge—is Engineering’s newly completed Snee Hall. This photo also offers a view of the modern Veterinary campus, established in 1957 with the completion of Schurman Hall at the end of Tower Road. And while the image’s lofty perspective makes individual buildings somewhat hard to see, that bird’s-eye view offers a dramatic look at the gorges bookending Central Campus.Jon Reis 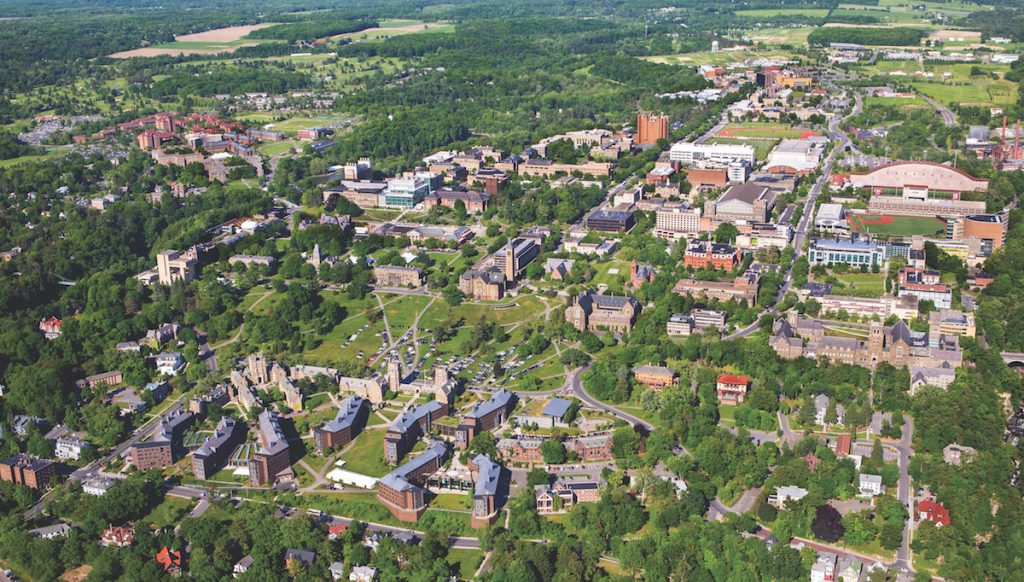 Our most recent photo—shot during Reunion, hence the numerous white tents and the cars parked on the Slope—shows dramatic changes to West Campus, as the U-Halls have been replaced by large “living-learning” residences. North Campus has become the required home of all freshmen, resulting in several new dorms (with more currently in the works). Engineering and the sciences have gained a number of modernist buildings, including Physical Sciences (above Goldwin Smith and to the right of Baker Lab), Weill (to the left of Lynah), Duffield (just below the baseball field), and Gates (just above Duffield). The original Statler has been replaced with a new version, constructed in the late Eighties. The only current major structure not included in this image is Klarman Hall, the glass-enclosed addition to Goldwin Smith completed in 2016.Jon Reis 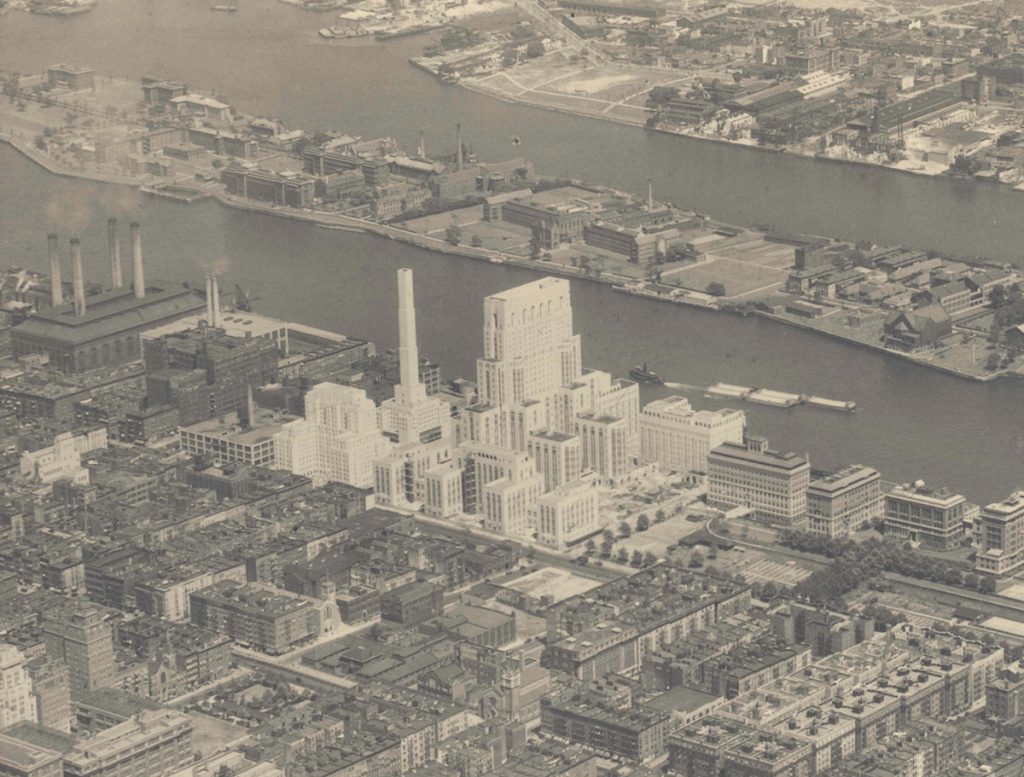 When the above image of the Medical College and its teaching hospital was taken in 1932, the Art Deco complex dominated its neighborhood on the far East Side of Manhattan.RMC 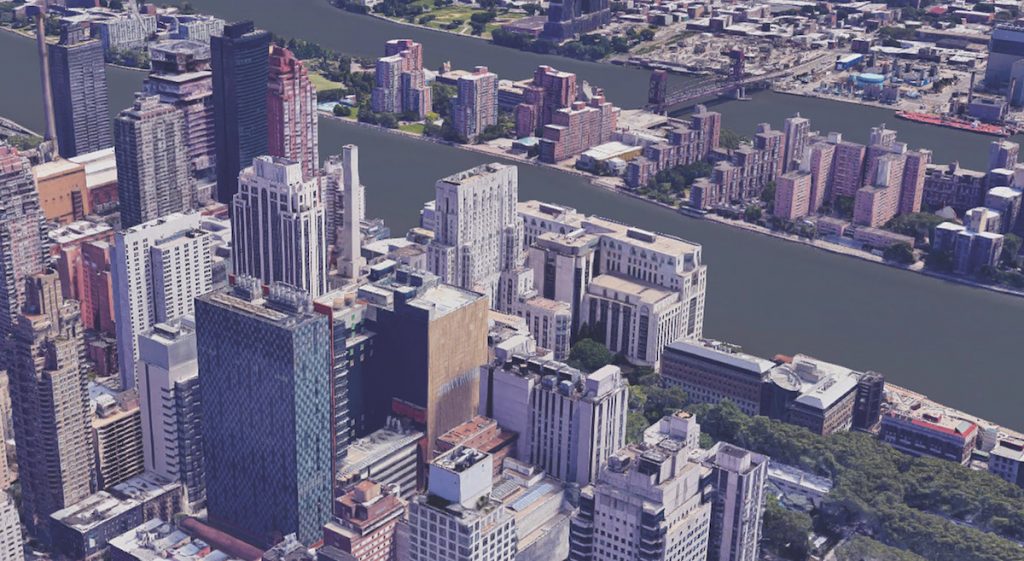 Both the college and its environs have grown dramatically in the intervening decades, with Weill Cornell now comprising research centers, student residences, administrative offices, and other facilities stretching for blocks from its original nexus at East 69th Street and York Avenue.Composed by Corey Earle

Built in the 1930s, Goldwater Memorial Hospital (above) on New York City’s Roosevelt Island was a massive complex designed to provide long-term care to hundreds of patients with chronic illnesses.Canva Pty Ltd/Almay 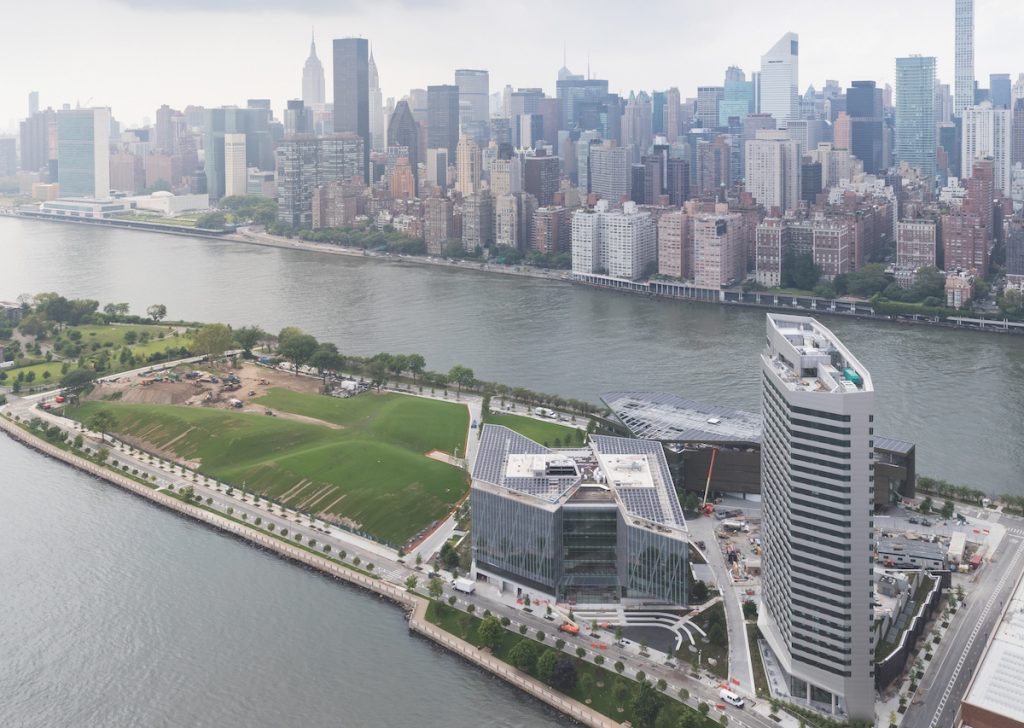 The Goldwater Memorial Hospital was closed in 2013 and demolished to make way for the Cornell Tech campus—just across the East River from the Medical College—whose first three buildings opened in fall 2017. A second phase of construction, including a hotel, is currently under way.Iwan Baar

8 thoughts on “Far, Far Above”