Olivier Busquet ’03, BA ’04, is a professional poker player—but don’t call him a gambler. In Busquet’s view, gambling describes games like craps or roulette, which rely heavily on chance and in which the house has a marked advantage. “Poker is more like trading or real estate investing—some form of strategic risk-taking,” he says. “Can you lose money? Of course. But the system is complex enough that a participant can learn the strategies that give them an edge over their opponents.” 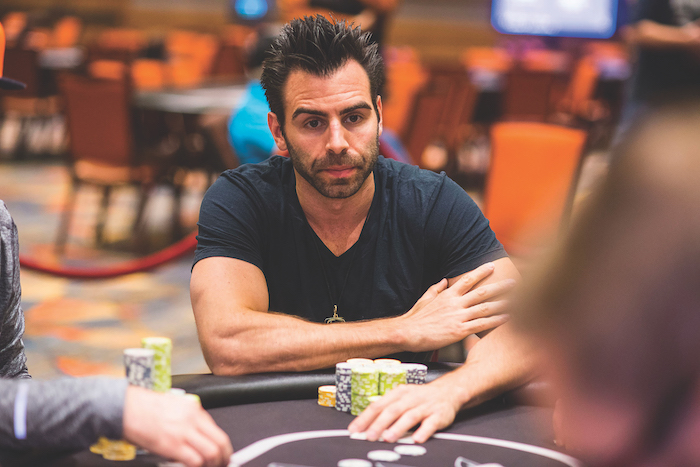 Busquet at the poker table. To cultivate a calm demeanor, he meditates daily and does breathing exercises.World Poker Tour

With lifetime earnings of about $10 million, the former philosophy major is among poker’s more successful and well-known players. While he started his career online and still primarily plays that way—his game is No-Limit Texas Hold ’Em, poker’s most popular form—he has had some impressive live tournament showings, including winning about $925,000 at the Borgata in Atlantic City in 2009 and more than $1 million (in euros) at a Barcelona casino in 2014. “People ask me how luck plays into poker. Is it half luck? Is it 25 percent?” Busquet observes. “To me, that’s the incorrect frame with which to ask the question. Luck is inversely correlated to the number of hands you play. If you and I were to play one hand of poker, luck would be an overwhelming factor in determining the outcome. If we played 100 hands, it would still be a huge factor, but much less. And as that number grows—1,000, 10,000, 100,000 hands—luck becomes negligible.”

As Busquet explains, online poker is distinct from the in-person version. It’s a much faster-paced game, for one thing; participants can play multiple hands at once, and there’s no time lag as physical cards are dealt. He sees online play as his “steady grind,” where skill and strategy are key and he can make a consistent profit; tournaments, by contrast, are so heavily impacted by the luck of the draw that even the best players don’t consistently win big. “By and large, people who play poker on the Internet take the game more seriously than people who are casually in a casino for some other purpose,” he notes. “The online environment has brought an entirely new type of professional, and I’m a reasonable example of that. If the only way for me to play was to spend ten, twelve hours a day in a casino, I never would have considered it.”

A longtime Manhattanite, Busquet moved to New Jersey after that state legalized online poker in 2013. Like many of his peers, he’d had his livelihood upended in April 2011, when the U.S. Department of Justice shut down the major online poker sites amid a spate of indictments; to keep playing legally, Busquet rented a furnished apartment in Toronto and also participated in more live tournaments. “Moving to Jersey was a way to recapture the online experience from the U.S.,” he says. “It’s been great for me to re-establish myself and play in a safe, legal, and regulated environment.” The American-born son of French parents—his mother, Anne Zumbiehl Busquet ’73, is an alum—Busquet started playing in his twenties, when he was working at a hedge fund. “I took up poker to develop skills for trading and kind of became obsessed with it,” he says. “I started spending an inordinate amount of my free time playing online. I was thinking about poker all the time.”

He got so fixated on it, in fact, that he played ninety to a hundred hours a week and was fired from his hedge fund job for playing at work; at home in Manhattan, his father deleted the Travel Channel from their cable line-up to keep him from watching “World Poker Tour.” When his dad threatened to cancel their Internet service, Busquet found his own place within days. “I’d describe my initial experience with poker, in some ways, as a bit unhealthy,” he admits. “It took on too important a role in my life. My sense of self-worth was too attached to my results. That’s a volatile, chaotic way to live.”

Busquet eventually carved out a workable routine. These days, he exercises in the morning—going to the gym, playing tennis or basketball, training in mixed martial arts (MMA), and walking his dog, a German shorthaired pointer named Sofia. He plays poker in the afternoon and evening, for a total of about twenty-five to thirty hours a week. “I don’t have any set schedule; that’s one thing I really value. I’m completely autonomous and can spend as much or as little time playing as I want to. It takes a high level of focus and concentration, so I’m careful not to play too much.” And while playing poker professionally may not have been his parents’ first choice for their son’s career, he says they’ve come to accept it. “They ask me about it, they cheer for me, they follow me,” he says. “They’re supportive in my struggles and happy for my success.”

Asked to ponder how Hollywood depicts poker—the audacious bluffs, the “tells” that betray the strength of a hand—Busquet says that while such factors are overblown in movies and on TV for dramatic effect, they do play a role. One fellow player, whom Busquet was coaching for a tournament, once compiled a database comprising side-by-side images of opponents when they were bluffing versus holding a strong hand. “It was amazing to see the same person in those two different states,” he says. “These are high-level professionals, who are presumably very good at hiding any sort of signal or tell—but it was obvious in every single case.” But as Busquet observes, that kind of knowledge is still hard to put into practice in real time; if an opponent seems riled up, is it because he has a terrible hand, or a great one? “My personal approach is much more theoretically based,” he says. “You can make some real mistakes when you try to rely on live situations.” To avoid giving away any tells of his own, Busquet aims to maintain a consistent posture and dispassionate facial expression. “I try to train myself to be as relaxed as possible,” he says. “I meditate daily and do breathing exercises. I want to be present in the moment, to turn off or minimize any mental chatter, any distraction.”

On top of his poker fame, Busquet made a name for himself in April 2016 when he won an MMA fight against a fellow player. The live-streamed bout, complete with a referee and judges, was the result of a friendly bet between the combatants. The win, in a technical knock-out, earned Busquet $150,000. “The overall experience was amazing,” says Busquet, who’d embraced the six months of intense training as a healing process following his divorce. “It was a great way to move on in my life and start to create a new identity for myself.” Since he still trains, would he take on another bout? “I have had the itch to—the right situation would have to come up,” he says. But, he admits, “My mother made me promise never to fight again.”