New York Fashion Week is known for over-the-top productions, and this February’s shows were no different, with Ralph Lauren turning a Madison Avenue store into a tropical garden—complete with mechanical butterflies and 100,000 white orchids—and Philipp Plein kicking off his event at the Public Library with Elvis impersonators, women dressed as the Statue of Liberty, and a performance by the rapper Nas. 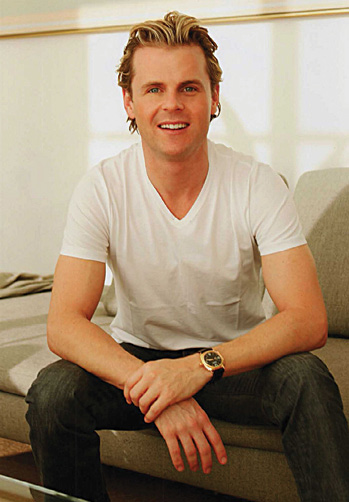 But in presenting his new collection, designer Adam Lippes ’95 opted for something much more low key. He hosted a cozy affair at his Washington Square Park townhouse, where models in pink velvet pantsuits, high-waisted culottes, and gold-fringed, floral-print dresses mingled with tea-sipping guests. “I want people to be able to feel and touch and see the clothes,” he says, sitting down at his busy Manhattan studio to chat with CAM less than two weeks before the show. “It brings back this intimacy to fashion that has been lost.”

Lippes applies the same understated approach to his designs, creating refined garments that are sold at such high-end retailers as Saks Fifth Avenue and Neiman Marcus. But these aren’t your average wardrobe staples; his offerings range from $400 knit tank tops to $600 cigarette pants to $2,750 cashmere coats. In September, Elle pronounced his eponymous label “rarified yet personal; luxurious yet approachable,” while Vogue recently noted that Lippes “has an eye for divine materials and he elevates his essentials with very special touches.”

Lippes describes his creations as sophisticated items that a woman can wear every day, not just on special occasions. So while “Scandal” star Kerry Washington sported his white tuxedo dress on the red carpet before the “Saturday Night Live” fortieth anniversary celebration, stylish celebs are just as likely to be seen in his clothes when they’re off duty; Lippes notes with delight that Amal Clooney (wife of George) was recently photographed at LAX airport wearing his fur-collared, military inspired trench coat. And though the designs are fashion-forward, Lippes insists they’re not one-season trends. “Hopefully,” he says, “they’re pieces you’ll have and wear for a long time to come.”

Wearing a slim-fitting gray crewneck sweater from his menswear line, Lippes takes a break from a packed schedule to describe how he launched the Adam Lippes label in 2013 after nearly two decades in the business. A Buffalo native who studied psychology on the Hill, he’d originally planned to be an investment banker, since his dream career seemed out of reach. “In my head, I’d always wanted to be a fashion designer,” he recalls, “but that was like saying you wanted to be a movie star.” But Lippes was inspired by his time in a study-abroad program in Paris—the epicenter of the industry—and went on to take an executive assistant position at Ralph Lauren after graduation. He then moved over to Oscar de la Renta, where he rose quickly to become one of fashion’s youngest creative directors. Having never gone to design school, he learned much from the legendary de la Renta, who offered an unexpected piece of advice. “He said our job is to make a woman smile,” says Lippes. “He didn’t take this all too seriously. I mean, we’re making dresses.”

In 2004, he struck out on his own with ADAM + EVE, an upscale collection of cotton basics. The company took off fast—with Oprah Winfrey declaring his T-shirt with hand-finished seams as one of her “favorite things”—and expanded into a full line of sportswear under the name ADAM. In 2010, apparel group Kellwood Co. acquired the brand, but Lippes walked away a year later. “We were making more, more, more, and that wasn’t what I set out to do,” he says. “I wanted to make clothes that had a lot of thought and quality.” He traveled the world for a few months and briefly toyed with buying a hotel in Brazil. But Lippes soon realized that designing was in his blood and formed a comeback plan. He sold his home—a Greenwich Village penthouse—and used the proceeds to buy back his trademark and set up his current venture. This time, he had a different focus: to establish himself exclusively as a luxury fashion line. (One exception was a limited-edition collection for Target in 2015, which included ponchos, jackets, shirtdresses, and accessories—all in plaid or checkered prints—that ranged from $10 to $130.)

Recently, Lippes hired a new CEO—the former head of North America e-commerce for Coach—in the hope of growing direct-to-consumer sales. He’s also working on lines of rugs, furniture, and paint, a potential first step toward becoming a lifestyle brand; Lippes has long been passionate about interior design, with magazines like Architectural Digest, W, and Vogue featuring his Manhattan residences and 100-acre farm in the Berkshires. Brimming with antiques and contemporary art—mixing items like Art Deco chairs and a nineteenth-century Japanese screen with paintings by Robert Motherwell and Milton Avery—his residences have been touted for their elegant, yet eclectic, vibe. “I’m so much about how I live and where I live,” he says. “You might even see more press about my homes than my clothes. So I’m really excited about that 360-degree lifestyle, where clothes are just a part of it.”