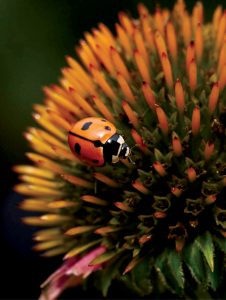 In 2011, a search party of volunteers aged six to eighty-one discovered a very special critter at work on an organic farm on Long Island. Images sent to researchers at Cornell confirmed the good news: it was Coccinella novemnotata, the nine-spotted ladybug and New York’s official state insect. Not seen in its homeland for twenty-nine years, C. novemnotata was feared to be extinct. Staff members from Cornell’s Lost Ladybug Project headed to the site, where at least twenty more were found. “That was a major discovery for us,” says John Losey, a professor of entomology and the project’s director. “It not only confirmed the existence of the nine-spotted in New York, but proved the value of citizen scientists in contributing to basic research.”

Ladybugs are beetles, members of the order Coleoptera. There are roughly 5,000 species of them in the world, about 500 native to North America. They’re revered by farmers for controlling aphids, mites, and other pests, saving the agriculture industry billions annually—and they’re just plain cute. But around the late Seventies, native ladybugs started to vanish, likely due to the introduction of imported species that muscled them out. Bigger, hungrier, and more aggressive, many were introduced to increase pest control; others may have hitched a ride on imported plants. Either way, they now outnumber native species by a factor of ten. In fact, aside from the Long Island discovery, the only other collection of nine-spotted ladybugs—once the most common of all North American species—in the Empire State is located in the Old Insectary on East Hill, home to about forty of the creatures. 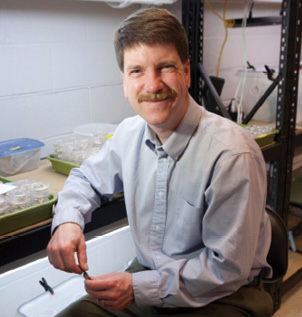 Since the project was founded in 2000 by entomology professor John Losey, over 38,000 ladybug sightings have been reported.

Losey founded the Lost Ladybug Project in 2000 as a way to recruit the public to help survey populations in general, and native species in particular. The effort went viral in 2008 with a $2 million grant from the National Science Foundation that vaulted the “lost” nine-spotted ladybug to celebrity status. (Other native species, like the extremely rare two-spotted, are also on a conservation watchlist.) Scads of citizen scientists—or “spotters”—of all ages joined a nationwide dragnet popularized by extensive media coverage, and project materials appeared on public school science curricula. “People, and especially kids, love to search for lady beetles,” says Losey. “Whether or not there are actual sightings of the nine-spotted, we like to see the samples. It’s just as important to know where ladybugs are not, as where they are.”

The effort is run largely through an interactive website that includes kid-friendly info, teaching materials, charts, guides, data maps—even a ladybug theme song composed by children’s musician Ilene Altman ’89. Participants have included Kathy Gleason ’79, a professor of landscape architecture who surveyed ladybugs with her son and a neighbor’s grandkids on Cornell land outside Ithaca a few years back. As she recalls: “Different children found something of interest in each step—finding ladybugs, capturing them, helping the younger children participate, photographing the ladybugs, and releasing them back into the field.”

To date, more than 38,000 ladybug sightings have been reported from almost every state in the continental U.S. While they include only a few hundred “lost” nine-spots—in such far-flung places as Virginia, Colorado, and Oregon—the project has helped construct a broad map of overall distribution and confirmed the widespread presence of non-native species. Their proliferation is a serious concern, Losey says, because non-natives are more vulnerable to parasites that could wipe them out, causing a pest-management crisis. In the worst case scenario, a collapse of those now-dominant ladybug colonies could result in worldwide food shortages, he says.

And these days, the Lost Ladybug Project is itself endangered. The NSF grant is over, and while Losey has applied for additional funding, it’s by no means certain. Private donations have kept the effort going, and research is still under way, but Losey says the project is “at a crossroads”: visits to discovery sites are on hold, as is a nine-spot restoration program that sold starter kits of larvae to New York State residents in 2016. “Nine-spotted ladybugs persist here and there,” says Losey, “but they have been pushed to the brink.” Or, to quote Altman’s catchy tune: “Ladybugs have important jobs / Eating aphids that destroy our crops / We need lots of different kinds / But some species are now hard to find.”

One thought on “The Lady Vanishes”