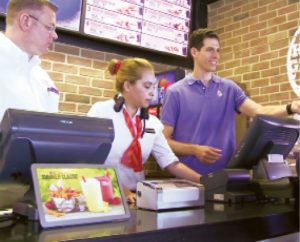 Burger King customers in Miami may have encountered a certain hardworking trainee in the spring of 2013. Wearing a blue polo and a wide smile, he learned to do everything from making a Whopper to staffing the drive-thru. He scrubbed toilets, cleaned the dining room—sesame seeds, he found, get stuck in every nook and cranny—and took orders at the counter. But when the Friday of Memorial Day weekend rolled around, his manager told him not to report for duty: he just wasn’t adept enough to handle the holiday rush.

It was an educational—and humbling—experience for Daniel Schwartz ’01, then Burger King’s newly minted CEO at just thirty-two. To get a grounding in the business’s day-to-day realities, Schwartz—
a CALS alum whose background is in finance—immersed himself in the tasks of the front-line worker. It wasn’t an “Undercover Boss” arrangement; Schwartz’s trainers knew his identity. And as a company video chronicling the process shows, they didn’t go easy on him. “I think by the end I was doing a good job grilling burgers and making Whoppers,” Schwartz recalls, chatting with CAM at the Statler during a recruiting trip to campus last fall. “But I didn’t quite perfect the art of the ice cream cone swirl. It was embarrassing—it’d always come out lopsided.” But was it challenging for workers to school the top exec? “I think the first day was a little awkward, and after that it was fine,” he says. “Once they saw how poorly I made the ice cream cones, they realized I had way more to learn
from them than they did from me.” 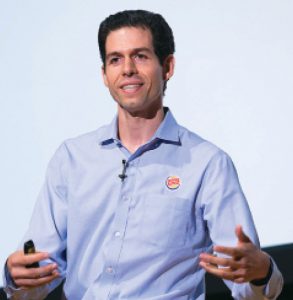 Running one of the world’s biggest fast-food chains was hardly on Schwartz’s radar when he majored in applied economics and management on the Hill. Growing up on Long Island, he figured he’d go into medicine or dentistry, but fell in love with finance. “Dan is an unusual combination of nice and amazingly accomplished,” says his former adviser, Deborah Streeter, a professor in the Dyson School. “He’s very driven and ambitious, but he’s also a wonderful person. I didn’t do much advising, because Dan always pretty much knew what he wanted to do.”

Schwartz finished his degree in three years and went to work on Wall Street, eventually landing at the Brazilian investment firm 3G Capital. When it purchased Burger King in 2010—Schwartz had identified the chain as a solid acquisition—he was named CFO. He quickly made some dramatic changes, such as replacing the traditional executive suites with an open office plan and selling the corporate jet, and a few years later he was promoted to the top job. “It’s less about cost-cutting than about creating an ownership environment,” he explains. “If it’s your own money, you turn the lights off when leave the room, and you probably treat the car you own better than one you rent.”

Among the lessons Schwartz gleaned from his front-line training was that the Burger King menu was too large and complicated, so he initiated a review process that resulted in it being trimmed down. He vastly reduced the number of corporate-owned restaurants, shifting them to franchises, and made menu improvements such as switching to 100 percent butter in the breakfast croissant. “We’ve grown same-store and system-wide sales,” he says. “Being more efficient allows us to focus and achieve that.” After Burger King merged with Tim Hortons, the Canadian coffee and donut stalwart, they formed a new company called Restaurant Brands International; it has since added Popeyes Louisiana Kitchen, the fried chicken chain, with Schwartz in charge of all three.

Schwartz, who lives in Miami with his wife and two small children, spends much of his life on the road. As he told Business Insider—in a 2017 story headlined “How a 36-year-old Wall Street prodigy saved Burger King”—he essentially lives on an American Airlines 737. He makes regular trips back to campus, both for executive recruiting and to speak to students; when he gave a lecture at the Hotel school in 2016, his bio noted that he can make a Whopper in under thirty-five seconds. “If you saw him on campus when he comes to visit, just carrying a backpack, you’d think he was a graduate student or even an undergraduate,” says Streeter, who calls Schwartz one of her highest-achieving alums. “He doesn’t look like the buttoned-down CEO type.”