It was the soundtrack of the Eighties-era office: the clickety-clack of the computer keyboard. More often than not, the instrument at hand was an IBM Model F (or its cheaper cousin, the Model M)—a keyboard that lives in legend among vintage hardware aficionados as the finest ever designed. Manufactured from the early Eighties to the mid-Nineties under a now-expired patent, the keyboards were rock solid—encased in steel and weighing some ten pounds. Their price tag in today’s dollars: a whopping $850. “The Model F was the result of millions of dollars in IBM research and development—it was built up to a quality standard, not down to a price point,” says Joe Strandberg ’10, BS ’09, who first used one on his family’s home PC as a child. “It’s comfortable to use, and you get sound and tactile feedback from the clicks and the weight of the springs, so you can type more accurately. It’s just a beautiful keyboard.” 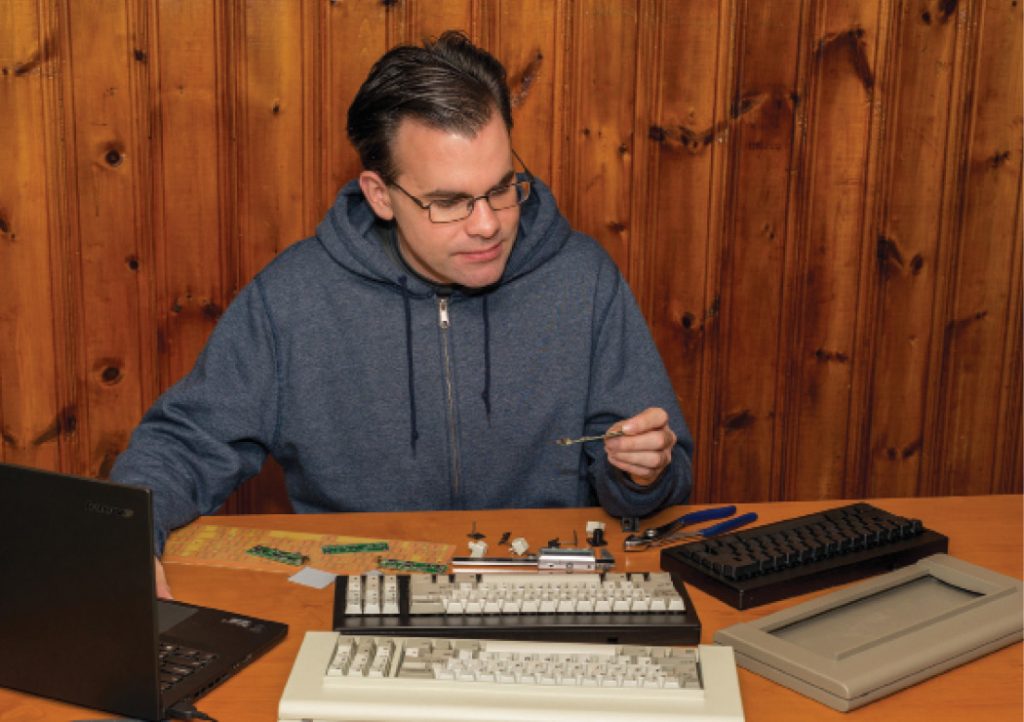 In the key of ‘F’: Strandberg with deconstructed versions of the IBM Model F keyboardProvided

Strandberg is part of an online community of hobbyists who swap info about old-style mechanical keyboards on sites like geekhack.org. For a few years, the former applied economics and management major was restoring vintage Model Fs, mainly sourced from electronics recyclers. “But I grew frustrated that the ‘best keyboard ever’ required hours of effort and a good deal of technical know-how to get it cleaned up and working on modern day computers,” says Strandberg, an analyst at a financial research firm in Manhattan. “There are all these tiny springs and other parts in it, and if one thing is off, it doesn’t work that well.”

So in 2014, Strandberg decided to manufacture them from scratch. Working on the project during nights and weekends, he did extensive research—including having a lab analyze the original key springs to determine their grade of steel—and contracted with a factory in China to produce them. Rather than fundraising via Kickstarter, he created a website (modelfkeyboards.com) for pre-orders, figuring he’d sell about 100. As of early December 2017—thanks in part to coverage in Popular Mechanics and on NPR—he’d sold more than 950, totaling more than $430,000 in revenue. “It’s been just crazy,” he says. “This is beyond my wildest expectations.”

The road to keyboard nirvana has not run smooth: Strandberg has had to push back his shipping date numerous times due to production issues. “For example,” he says, “the cases are made with a special process of powder-coating to get them to look like the old splotchy-textured paint of the originals, and that took the factory six months to figure out. And if you use the wrong material for the springs, they make a sound that is a little too high-pitched. There’s a lot of detail work.”

The keyboards, which are still available for order and are compatible with both PCs and Macs, are priced at $325 to $399. They’re offered in both the boxy-looking classic style (which comprises about 80 percent of orders) and a sleeker modern version. Strandberg hopes they’ll begin to ship in the first quarter of 2018; he plans to manufacture some extras to sell until his inventory is exhausted, but since it’s a limited production run, once they’re gone they’re gone. Open-ended production isn’t financially feasible, he explains—and anyway, he’s about ready to move on. “I’ve been working on this project for years, over e-mail late at night because [New York and China] are twelve hours apart, so I’ve lost a lot of sleep,” he says. “It’s going to be great the day the first keyboards ship. Then we’ll be able to say we did it—and I can get some rest.”