Once a fat kid, always a fat kid,” says Steve Madden ‘ 86. ” There’s no getting that monkey off your back.” In his new book, Embrace the Suck: What I Learned at the Box about Hard Work, (Very) Sore Muscles, and Burpees Before Sunrise, the former CAM editor recounts his immersion in CrossFit, a hard-core fitness regimen that has swept the country in recent years. 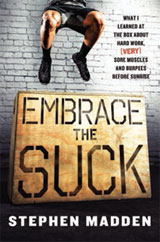 Known for its strict diet recommendations and grueling workouts—including the aforementioned “burpees,” in which you stand up straight, drop so your chest hits the ground while your legs extend behind you, quickly stand up again, then jump in the air and clap your hands over your head—CrossFit isn’t for the faint of heart. But, he notes, it works. “If you’re diligent about it, you get pretty dramatic results,” says Madden, the former editor of Bicycling magazine who’s now a freelance writer and CrossFit coach, “and you get them very quickly.”

At first, Madden planned to write a memoir about following the CrossFit program to the letter for a calendar year—but as he got into the project, he realized something deeper was at work. “Why am I doing this to myself?” he recalls wondering, realizing that his immersion in CrossFit mirrored earlier forays into swimming, hockey, and other sports. “Why have I always done it to myself? And why is it more important to me than some intellectual, financial, or family success?” Throughout the book, he repeatedly refers to insecurities that date back to his childhood in the Boston area, and ties them to his present-day desire to be a role model for his family. “I wanted to set a positive example for my kids, and let them know that they’re capable of so much more than they might think they are, or people might tell them they are,” he says. “And I needed to learn that lesson myself.” 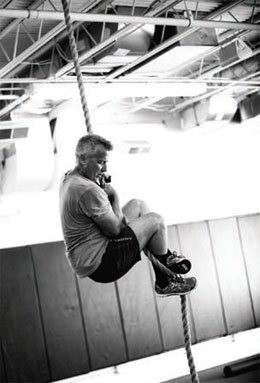 A CrossFit facility (or “box”) near his New Jersey home became his proving ground, where he bonded with a variety of other hard-chargers looking to push themselves to the limit. “At most CrossFit gyms, people are ferociously competitive, but they’re also very supportive,” he says. “Part of the etiquette is that you never leave a workout until everyone is done. That means that the stud who finishes first stays and roots on the guy who finishes last, which is very cool.”

Madden says the book’s title has become a mantra for his life. He no longer overreacts to difficulties or shies away from challenges; rather, he attacks them with gusto. “If you’re going to do something and it’s really hard and it hurts—in a nutshell, it sucks—how can you make the best of it?” he says. “Sometimes it’s crazy how painful it is, but you realize that there’s nothing that you can’t get through, that you can’t endure, if you are smart about it and stick with it. It sounds trite to say that a Cornell alum needed an exercise program to reinforce that—but it’s really true.”