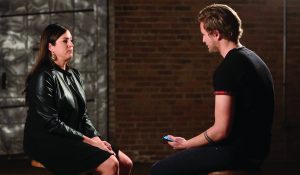 Chicago-based sports journalist Sarah Spain ’02 sits on a stool in a spare, brick-walled room, listening as men read aloud some of the “mean tweets” she has received in response to her work on ESPN radio and TV. One by one, the men—volunteers, not the actual writers of the messages— stammer and squirm as they force the words out.

“Sarah Spain sounds like a nagging wife on TV today,” says one tweet, the least offensive by far.

“I hope your boyfriend beats you,” says another.

And this: “I hope your dog gets hit by a car, you bitch.”

Spain listens stoically—she’s heard it all before, and worse—but the men are visibly distraught. Says one, a heavyset guy in a backward baseball cap: “I’m having trouble looking at you when I’m saying these things.”

That’s precisely the point. Spain and a female colleague were appearing in a public service announcement aimed at highlighting the online abuse—often vicious, foul-mouthed, and explicitly threatening—that women in their industry suffer on a daily basis. “At this point, I don’t really process the words anymore,” Spain says. “Yesterday somebody told me to drink bleach, and I laughed; it was like the fifth time someone had said that. I don’t think about it anymore, because it’s been going on for years. Whereas the men reading them—who didn’t know what was coming—had a natural reaction to it.”

‘At this point, I don’t really process the words anymore. Yesterday somebody told me to drink bleach, and I laughed.‘

Entitled “#MoreThanMean,” the fourminute video made a media splash when it came out in April, with Spain getting a barrage of interview requests. She also got an outpouring of support—and a certain amount of backlash. “The main responses that were not positive were, ‘Suck it up or get out of the industry,’ ” she says, “which is silly, because it’s pretty clear by now that I have a thick skin.”

Another thing she thinks is silly—no, make that infuriating— is that, as a woman, she’s constantly called upon to prove that she actually cares about sports. As she tweeted in mid-May (along with emojis of laughter and tears): “Uber driver had ESPN radio on. Asked him to turn it up. He was shocked . . . and then proceeded to explain sports to me.” 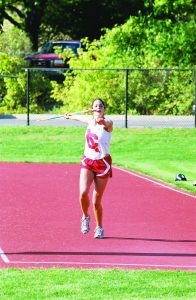 Spain throwing the javelin for the Big Red.

Spain, who boasts more than 100,000 Twitter followers, isn’t just a veteran sports journalist; she’s an accomplished athlete. An English major on the Hill, she was a heptathlete on the track and field team, serving as co-captain her senior year—when the Big Red won both indoor and outdoor Ivy Heps—and setting a school record in javelin. She originally envisioned a career in comedy, studying at Second City’s L.A. conservatory, before moving into journalism. She relocated to Chicago in 2008 and has since held a series of on- and off-camera jobs in radio, TV, and online media; she’s currently a writer for espnW.com; one of the three female hosts of “The Trifecta” on ESPN radio; a contributor to TV’s “SportsCenter” and “The Sports Reporters”; and the host of her own podcast, “That’s What She Said.” She notes that after her first appearance on “The Sports Reporters,” trolls snidely suggested— in unprintable terms—that she had been hired due to her physique, or because she had done time on the proverbial casting couch. “It was not even anything I had said or done,” she marvels. “It was, ‘Why is she allowed on this show?’ ”

Pondering why the “#MoreThanMean” video struck such a nerve, she theorizes—more than a bit ruefully—that part of its power stemmed from the fact that it highlighted the men’s discomfort. The volunteers, who weren’t allowed to see the tweets before reading them to Spain and her colleague, sometimes wound up apologizing on behalf of the entire male gender. “It’s so easy to discount when women say they’re experiencing something, but for whatever reason when a man does it, we listen,” she observes. “Which is troubling—but in this case, also effective.”

So how did it feel to hear the invective read aloud? While Spain long ago resolved not to let online trolls rile her, she admits that the exercise revived some of the words’ power to wound. “Oddly enough, the one about wanting my dog to get hit by a car made me upset every time they said it, and the ones about me really didn’t,” she says. “I think it’s because I’m protective of my dog and I love him so much, but I have a hard enough shell that I don’t really worry about myself.”

‘It’s so easy to discount when women say they’re experiencing something, but for whatever reason when a man does it, we listen. Which is troubling—but in this case, also effective.’

For Spain, as for many of her female colleagues, online abuse spikes when she reports stories that touch on gender-related topics—for example, when she has lamented the lack of respect afforded to WNBA players—or hot-button issues like domestic violence. When Spain called Yankees fans to task for giving baseball pitcher Aroldis Chapman a standing ovation after he returned from a thirty-game suspension for spousal abuse, she says, “for the next three hours my Twitter mentions were all ‘You’re a fat whore, get the Yankees’ name out of your mouth, you’re a dumbass.’ ” Most of the time, Spain ignores the trolls—but occasionally, she retweets them. “I refuse to let them have all the power,” she says. “And secondly, I do like messing with people—so if you sound like a total idiot, I’d like to show everybody how idiotic you are.”

Sometimes, she mounts a more active defense—like when she was covering the domestic assault case against football player Ray Rice, and one young man tweeted to her, “I hope someone Ray Rices you, except this time you die.” Spain found out that the man’s father was a state representative, so she retweeted his threat along with a note observing how easy it is to find someone online—and he immediately deleted his Twitter account. Then there was the time when one of her co-hosts, a lesbian, was receiving a steady stream of homophobic tweets from one particular man. Some googling revealed that he worked for a certain car rental company—so Spain forwarded the tweets to his boss. “This is real life,” she says. “There are people who like to say that it isn’t. But you are one person, in life and online.”