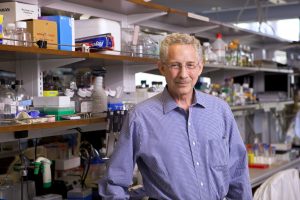 Last fall, New York Giants tight end Daniel Fells suffered an ankle injury during practice. He later spiked a temperature of 104 and was rushed to the hospital, where doctors found that the wound was infected with methicillin-resistant Staphylococcus aureus (MRSA). As worried fans followed Fells’s struggles in the media, he underwent multiple surgeries to excise the potentially deadly strain of bacteria, which doesn’t respond to most antibiotics. While doctors were able to save his foot—and his life—his future in football remains uncertain.

For Weill Cornell Medicine microbiology professor Carl Nathan, stories like Fells’s underscore a threat that he has devoted a great deal of energy to publicizing and combatting. For more than a decade, he has been advocating the development of new antibiotics, and measures to curb the overuse that drives evolution of drug-resistant strains.

One of the world’s leading authorities on tuberculosis, Nathan has written numerous academic articles on antibiotic resistance—including pieces in Nature and the New England Journal of Medicine—and been a global thought leader on the subject in the research community and beyond. But he notes that cases like Fells’s are far more effective at making both average Americans and government officials understand the issue’s urgency. “It makes no impact to talk about the threat numerically and statistically, with epidemiologic arguments,” says Nathan, who marked his thirtieth anniversary at Weill Cornell last spring. “What gets people is the individuals: the face, the name, the personal story.”

I don’t think it’s hard to be interested; I think it’s hard to justify ignoring it. We’re not making new antibiotics, and each one that we have is becoming progressively less useful as resistance rises. People with bacterial infections are moving around more without adequate public health control measures. It’s hard not to be alarmed. What will become of modern medicine without antibiotics? Just think about it: Not only will people get pneumonia and die often rather than rarely, but consider elective surgery. Are you going to want to have your hip replaced if you can’t protect against operative-associated infections? What’s going to happen to trauma surgery? Or soldiers who live close together in barracks, and meningococcal disease spreads and you can’t treat it? What about premature babies? What about cancer chemotherapy? It goes on and on.

’In this country, an estimated 23,000 people a year die from bacterial infections that used to be treatable and now are not.’

How big a problem is this in the U.S.?

In this country, an estimated 23,000 people a year die from bacterial infections that used to be treatable and now are not. Gonorrhea, for example, was originally the easiest bacterial infectious disease to treat; it took a single injection of penicillin to cure it. There are now cases of gonorrhea in this country—somewhere between 1 and 5 percent—that you can’t treat with anything, leading to pain, infertility, arthritis, and even death. Globally the problem is much bigger. There are about a dozen species of bacterial pathogens where you now have samples grown from some patients that are resistant to every antibiotic available.

Would you give an example of a global threat?

Probably the dominant form of antimicrobial resistance is expressed by Mycobacterium tuberculosis. This is the single leading cause of death from a bacterial infection in the world, even though it is curable—and to put those two things in the same sentence constitutes a societal indictment. In this country, we have very few cases of multi-drug-resistant tuberculosis [MDR-TB], but I just came back from Haiti—four hours away by plane—where they diagnosed about 16,000 new TB cases in 2014 alone, and hundreds of them are multi-drug-resistant. The fatality rate of MDR-TB in many places is about 70 percent. Treatment takes about two years and the drugs are toxic. The average patient is taking twelve to seventeen pills a day, plus a painful injection.

Is it hard to rally activism around this issue?

It is. This isn’t a disease like HIV/AIDS, where there was a community of people who were afflicted and formed lobbying groups, protested, and demanded more funding. Here you have isolated people with no particular demographic to tie them together. They’re not hemophiliacs, they don’t have cystic fibrosis; they could be anybody or everybody. These are scattered, tragic events. And when they involve celebrities, are particularly gruesome, or the person who’s affected is particularly photogenic or heartrending, they come into the news. If I were allowing myself to be cynical, I would say that when members of Congress or their loved ones are affected, this will move very quickly.

So what are you calling for?

Two things. One is an oversight structure, and another is cooperative research between the private, academic, and government sectors to overcome some of the obstacles for developing new antibacterials.

How would such an oversight agency be structured?

It isn’t entirely clear, but the first issue is that these problems are global. Resistance moves in waves from one place to another, and it’s futile to try to control it by only looking within a given nation. So there needs to be a global surveillance network where data are collected in a scientifically meaningful way and shared. Drug companies are almost exclusively multinational, so there needs to be a coordinated effort on how to solve the economic problem that’s facing antibiotic development. It basically means making a reward structure that is not dependent on the traditional one, because the opportunities for return on investment are so much smaller than for other classes of drugs that there are almost no companies left that have chosen to continue antibiotic discovery.

Why is it so hard for a company to make a profit on an antibiotic?

There are several reasons. There’s a high rate of failure during the drug discovery process—and once the drugs are released, they’re lost to resistance relatively quickly. Also, they’re often curative in a relatively short time. A typical antibiotic course can be one to ten days, as opposed to lifelong for many other kinds of drugs, so the opportunity for making money is very limited.

With overprescription of antibiotics helping to drive resistance, could you describe the most common ways in which the drugs are misused?

In this country well over half the antibiotics produced are used in the food industry; they’re administered to healthy animals, fish, and plants to increase production. Another problem in this and many other countries is overprescription of antibiotics to humans without diagnosis; most prescriptions are dispensed for viral infections where they have no benefit. A terrible problem overseas, especially in China and India, is profitmaking by doctors for writing prescriptions. Here at home, the doctor is paid for providing care, and the pharmacist and drug company make money from the prescription. In those countries, the doctor is selling the antibiotic and has an incentive to prescribe frequently and abundantly, and that’s exactly what’s happening.

If you’re advocating for major cuts in antibiotic use in livestock, mightn’t that face serious opposition from agriculture?

The argument is that it will raise costs and lower production— but in parts of Europe that have banned using antibiotics relevant to human medicine in healthy animals for food production, those fears were not realized. Congress and the FDA have moved toward regulation, but for political reasons they’ve been unable to go the distance.

What words of wisdom do you have for the American pediatrician on the front lines, facing parents who demand she prescribe antibiotics for their sick child, even though she’s quite sure it won’t help?

I have great sympathy for her, and I’m not trying to tell her what to do, because her responsibility is to the patient and to weigh all the factors involved. Such as, if she offends the parents, they may not come back when it’s really necessary, and there could be adverse effects on the child’s health or even life. I don’t think the onus is on her.

‘For several years now, the World Economic Forum has prioritized antimicrobial resistance as a major threat to global security and economic advancement.’

Then what’s the solution?

Quick, accurate diagnostics that can be used at the point of care. Then, that pediatrician can say to the parents, “Your child has reovirus, and unfortunately we don’t have anything for it. An antibiotic is most likely to disrupt the healthy bacteria that help your child’s immune system develop, so actually that might be harmful.” I think that conversation would go very differently than, “I don’t know what your child has, but I’m not willing to guess that it might a bacterial infection, so I won’t give you an antibiotic.” If you have a diagnostic test that informs you about your patient’s sample, that changes the equation.

Besides diagnostic testing and reducing antibiotics in food production, what else can be done in the U.S.?

We can make efforts at conservation, which includes correct prescription. We can reduce the need for antibiotics by following appropriate procedures of hygiene and sanitation, for example handwashing by medical personnel. We can encourage research and promote alternative methods— like vaccination, use of antibodies against bacteria, or novel strategies to block their resistance mechanisms. There are a lot of moving parts, and it requires oversight by an agency that can identify the points of control and undertake the appropriate combination of education, exhortation, regulation, surveillance, and funding.

Are global leaders starting to get it?

They are. For several years now, the World Economic Forum has prioritized antimicrobial resistance as a major threat to global security and economic advancement. The WHO has listed it as a top concern. The government of the United Kingdom has prioritized it as a chief concern in the sphere of medicine. President Obama has called for and received a national action plan for combatting antimicrobial resistance.

So would you say you’re optimistic that despite all the challenges, a solution can be found?

There is every reason to remain pessimistic, but I don’t think it helps. It’s like any big change in how society’s structured. You hammer away, and nothing changes—then suddenly it starts to change, and it changes very quickly. There have been lots of things—women’s right to vote; abolition; apartheid—where change seemed impossible and lots of people put their shoulder to the wheel and no one could tell if their effort was going to be wasted, but eventually these intractable problems gave way. So I’m hoping we’re reaching the point in terms of the level of urgency, the growing knowledge in the business and government sectors, and the fact that this has reached collective attention at the level of the WHO. I think it’s different now. We can’t go back. We can only go forward.