Jordan Andino ’10 has competed on TV shows from “Recipe for Deception” to “Beat Bobby Flay.” He has hosted his own program on the Cooking Channel, schooled Rachael Ray fans on the latest food trends, and taught viewers of the online platform Tastemade how to whip up a homemade version of the Taco Bell Crunchwrap. Zagat put him on its 2016 “30 Under 30” list of the hottest food and beverage pros in New York City; the following year, People called him America’s sexiest chef, underscoring its choice with a shirtless photo showcasing Andino’s six-pack abs and fork-and-knife arm tattoos. And if that weren’t enough pop-culture cachet, he has served as personal chef to the first family of reality TV: on “Kourtney & Khloé Take the Hamptons,” the Kardashian sisters even pondered setting up the then-twenty-five-year-old with their mom, Kris Jenner, for a summer fling—but Andino and Jenner turned the tables on them by pretending to be caught in a tryst, complete with scattered undergarments. 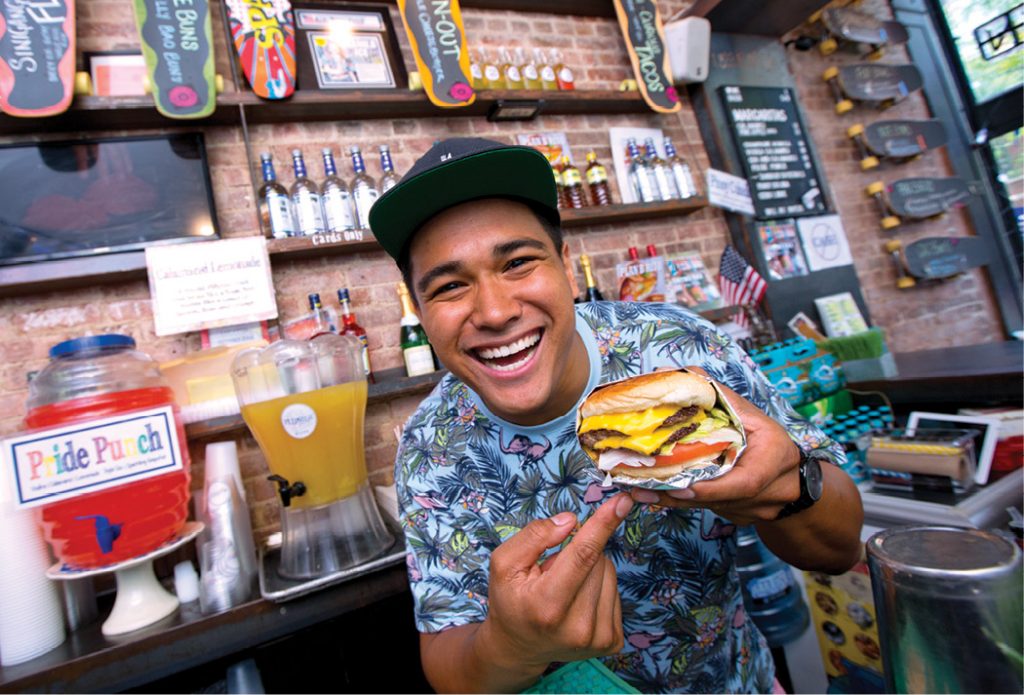 Andino in his West Village restaurant with his version of the double cheeseburger, dubbed a “Flip-N-Out Burger.”John Abbott

Despite all the media exposure—which began in 2013, after his best friend sneakily applied to “Chopped” on his behalf and Andino wound up finishing second—the Hotel alum couldn’t quite believe it when he arrived at the “Today” show green room in November 2016 for a Thanksgiving special. As he recalls, his fellow guests included not only Ray and Flay but Marcus Samuelsson, Giada de Laurentiis, Martha Stewart, Daniel Boulud, and Geoffrey Zakarian. “I’m looking around, and practically every celebrity chef I’ve ever admired is in this room,” he says. “And I’m like, I don’t understand why I’m here right now.”

It was a rare moment of insecurity for Andino, who has become a TV fixture not only for his deft culinary skills but for his brash persona, model-caliber looks, boundless energy, and infectious enthusiasm for cuisines both sophisticated and quotidian. Case in point: when he came onstage for the 2014 episode of “Beat Bobby Flay”—in which two chefs compete for the chance to go up against Flay in a championship round—he swaggered onto the arena-style set, slapped his chest, did a cocky little dance, and played shamelessly to the audience. “I felt like a contestant in a gladiator match,” he recalls. “That’s where I thrive. I want all the pressure. I want the spotlight on me. If I’m Michael Jordan, I want the ball with the last shot. And I’ll take the failure or the success, whichever way it comes.” While Andino won the first round (his pan-seared Arctic char with lemon beurre blanc and Swiss chard wowed the judges), he failed to beat Flay in a showdown over short ribs—possibly because he forgot to add the eggs to his fried rice and wound up tossing them on top at the last second. “I should’ve beaten him,” Andino says, still irked half a decade later. “The eggs were bulls–t. I tasted his dish. Mine was so much more refined and tasted better. Don’t get me started.”

It’s a Saturday last spring, and Andino is chatting with CAM at FlipSigi, his tiny taco joint in New York City’s West Village. As New York Times critic Ligaya Mishan, MFA ’95, described it in a 2016 review: “The restaurant, equipped with one exceedingly narrow table and bar stools, feels like an extension of Mr. Andino’s personality. ‘Hours of Awesomeness’ are posted in the window. The staff wears aloha shirts. . . . Menu items are written on skateboards, the chef’s main mode of transportation.” Those skateboards bear names of such dishes as “Nice Buns” (dough stuffed with fried pork belly, pickles, scallions, and barbecue sauce) and “Bi-Curious” (two tacos with a choice of protein). The housemade hot sauces are named First, Second, and Third Base—a reference not to baseball but to the time-honored junior-high terms for carnal exploits. “Everything in this restaurant,” Andino says with a chuckle, “has either a sexual innuendo or some sort of hidden vulgarity that I’ve fully endorsed.” 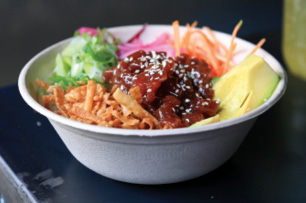 FlipSigi serves Andino’s take on the food of his parents’ native Philippines—the name translates as “go Filipino”—a cuisine he describes as an amalgam of the nation’s three colonizers: China (contributing elements like soy, garlic, and vinegar), Spain (árbol chilies, paprika), and the U.S. (Spam, ketchup). “It’s tangy and sweet, not a lot of spice, heavily dependent on garlic and rice,” he explains. “It’s unique and unlike most other southeastern Asian cuisines.” FlipSigi’s menu items, most of which range from about $4 to $10, include adobo chicken over garlic-coconut fried rice; tacos filled with bok choy, salsa, chicharrones (fried pork rinds), and tamarind-braised short rib; and a version of poutine—the traditional Canadian comfort food of gravy-and-cheese-topped French fries—with cilantro, mozzarella, and crumbled longanisa, a sweet cured pork sausage. For dessert, there’s bright purple ice cream flavored with coconut and ube, a variety of sweet potato. “My type of Filipino cuisine is definitely avant garde—it respects the old while presenting it in a new way,” Andino says as he preps the restaurant for opening, laying out hot sauces and mixing up a batch of calamansi juice, a citrus drink akin to lemonade that’s served virgin or as the base for margaritas and mimosas. “I don’t ever pretend to be authentic.” As he notes with a smile: “Literally, my spiel is, ‘Welcome to FlipSigi; if you’re looking for authentic Filipino food, I can confidently tell you that this is the worst place in the world to eat. But if you want really good food, you’ve come to the right place.’ ”

Born in Toronto—hence the fondness for poutine—Andino was nine when his parents separated and he moved with his mom to Manhattan Beach, California. His dad is a chef, so when Andino would visit him during school breaks, spending time with him meant logging long hours in restaurant kitchens—first sweeping up and emptying the garbage, then prepping ingredients, and eventually cooking. His voice cracks a bit as he recalls the time his father—not one to be overly emotional—told him to look around the room at the professional chefs at work: “He said, ‘You see everyone here? You’re better, right now, than all of them.’ ” A couple of years later, when Andino was only in his mid-teens, he had a lucrative side gig as a personal chef in the L.A. area. “I fell into it, and I ended up loving it,” he says. “By the time I came to Cornell I knew exactly what I wanted to do.” On the Hill, he immersed himself in the Hotel school’s culinary coursework and hosted private dinners at his fraternity, Sigma Phi; by junior year, he was in charge of food and beverage at Dino’s, then a popular diner and bar in Collegetown. After graduation he did a brief stage (internship) at Jean Georges in New York City, then worked for Wolfgang Puck at Spago in L.A. and for Thomas Keller at French Laundry in the Napa Valley. “It shaped my palate and really polished me,” he says. “That’s when I knew I wanted to take Filipino food to the next level.”

He worked at several restaurants in the New York metro area before he and two partners opened FlipSigi in 2016. It was originally called 2nd City after his mother’s hometown in the Philippines, but he changed it to avoid confusion with the Chicago comedy troupe. (A second Manhattan location opened in 2017, but closed this year due to a lack of foot traffic.) In fall 2017, the Cooking Channel debuted “Late Night Eats,” in which Andino showcased after-hours cuisine, from rabbit tacos in San Antonio to a burger-donut hybrid in Orlando. The show reflected Andino’s affection for dining into the wee hours; as he notes, he can survive on six hours or less of sleep a night. That makes him—he pulls out his phone to cite a term he found online—part of the 1 to 3 percent of the population who are the “sleepless elite.”

“Late Night Eats” ended after two seasons, and Andino currently has several other TV projects in the works. But, he says, his ultimate goal is to own a fine dining restaurant showcasing his take on Filipino food—and, by the time he’s forty, to become the first chef in that genre to earn a Michelin star. “It’s a really bizarre path,” he says of his TV fame. “I never expected it, and honestly I didn’t even want it. I’m a chef. All I want to do is cook. But I’m not stupid; the whole celebrity chef thing—and I don’t even like calling myself that—I’m going to capitalize on it. I’m not going to look like this forever. This hair is going to go. I’m gonna get super fat. So if there’s a market for it, let’s rock ’n’ roll.”