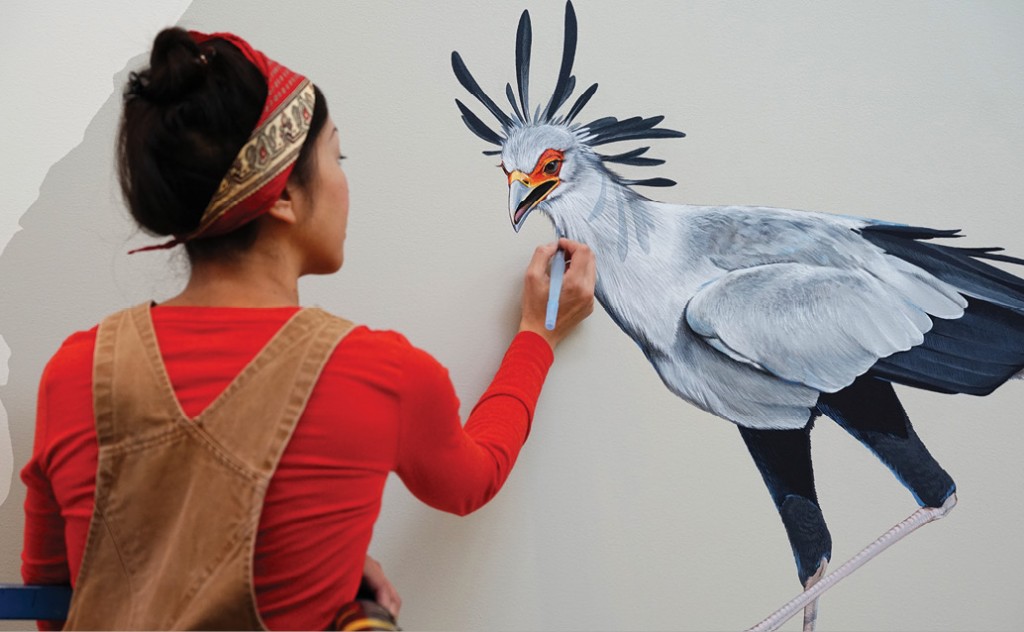 Artist Jane Kim paints a secretary bird at the Lab of Ornithology.

On a wall in the Lab of Ornithology’s visitor center, an albatross is cap­­­tured in mid-swoop, its ten-foot wingspan taller than the adjacent doorway. A macaw is resplendent in bright yellow and blue plumage, while a great reed warbler has its beak open in song. A black frigatebird is perched atop a sprinkler nozzle protruding from the wall, his distinctive red throat pouch inflated to attract a mate.

Seventy feet wide and forty feet tall and wrapping around a corner, the lab’s newly completed mural covers roughly 3,000 square feet of wall space—and 375 million years of avian evolution. Overlaid on a map of the world, the artwork features 243 bird species, one for every modern family; each is painted to scale in its indigenous territory. Still-living species are represented in their characteristic (and often vibrant) colors, with extinct ones depicted in monochrome. Twenty-seven of the birds’ ancient ancestors are there too: a thirty-foot dinosaur known as a Yutyrannus stands at the top of the stairs, while a large reptile called a caiman seems to emerge from behind a doorframe.

Commissioned to celebrate the lab’s centennial, the work took two and a half years to design and produce. Artist Jane Kim, a former lab intern and alumna of the Rhode Island School of Design, spent sixteen months painting it, averaging a bird a day; the project’s completion in early December garnered national news coverage, including pieces in Audubon and the New York Times Magazine. The mural’s title—From So Simple a Beginning—comes from a passage in On the Origin of Species in which Charles Darwin summarizes his thoughts on evolution.

The lab is currently designing online interactive features to complement the artwork. Users will be able to click on any of the 270 creatures for a detailed description, information about the family it represents, a map of its habitat, and an audio sample of its call, taken from the lab’s own Macaulay Library of Natural Sounds.