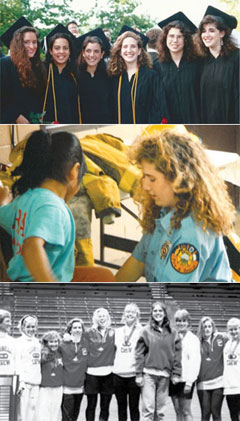 Big Red memories (top): Jen Dulski (center right) with classmates at Commencement, (middle) as a Cayuga Heights firefighter, and (bottom) with her crew teammates (Dulski, the coxswain, is third from left).

In high school, Jennifer Huret Dulski ’93, MBA ’99, coxed the men’s crew team. When she got to Cornell, she wanted to do the same—but she was told that women weren’t eligible. She asked if she could at least try out, and got turned down.

For a lot of freshmen, that would’ve been the end of it; for Dulski, it was just the beginning. She started arguing her case up the chain of command, from coaches to the director of athletics himself. The answer was still no.

Determined to cox, she joined the women’s team—leading a Big Red boat that would go on to win a national championship. Then, some three months into fall semester, the phone rang. “I got a call from the athletic director, who said, ‘We’ve thought about it, and we think you’re right; we’re going to change the policy,'” Dulski recalls with a grin. “At that point I had already integrated pretty deeply into the women’s team and felt loyal to them, so I didn’t end up changing to the men’s. But today, the majority of coxswains on the men’s team at Cornell and most other universities are women. They’re quite good at it.”

It was, arguably, Dulski’s first successful campaign. And more than two decades later—as head of the world’s leading online petition site—she’s helping millions of other people advocate for their own causes. Dulski is president and chief operating officer of  change.org, the social media company that lets users target decision makers, make specific demands, garner support from like-minded people around the globe, and quantify the results.

Want to stop the use of juvenile solitary confinement? Create a National Girl in Science Day? Convince Target and JC Penney to close on Thanksgiving? Draft Jon Stewart to moderate a presidential debate? Put swimmer Greg Louganis on a Wheaties box? All those petitions, and thousands of others, were soliciting signatures on change.org’s website late last fall. Each of the site’s petitions is directed to a specific person or entity, from President Obama to Old Navy. And when the campaigns are successful—as when 166,882 signatures prompted Taco Bell to commit to cage-free eggs—change.org verifies the result before tallying it in the win column. “We have more than 100 million people using the platform around the world, and we have almost one victory an hour,” Dulski says. “They might be small and in their local neighborhood, or they might be a massive global campaign. It is impact, at scale, in a very direct sense.” 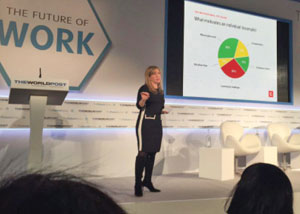 Featured speaker: Dulski at a London conference in 2015. Photos provided

Based in San Francisco—Dulski’s hometown—and with offices worldwide, change.org tends to attract socially progressive causes, but it’s designed as a neutral platform; the only restrictions are prohibitions against hate speech, incitement to violence, defamation, and the like. Dulski points out that, for example, change.org hosts petitions on both sides of the gun control debate; the same goes for the controversial reality program “19 Kids and Counting,” whose conservative Christian stars faced a child-molestation scandal last year. “We have people who want that show off the air and people who want it to stay on,” Dulski says, “and they’re equal in size.”

Change.org hosts petitions about gravely serious matters, like preventing female genital muti­lation and protecting Syrian refugees—and more lighthearted ones, like resurrecting Patrick Dempsey’s character “McDreamy” on ABC’s “Gray’s Anatomy.” (While the latter garnered more than 108,000 signatures, Dulski notes, “unfortunately, it was not successful—but some of the reasons people put for signing it were longer and more impassioned than on a lot of others.”) Although the company has a “.org” domain, it’s a for-profit enterprise; it earns revenue from petitioners who pay for additional exposure as well as from “sponsored campaigns” by companies, nonprofits, political candidates, and others. “We often say that the .org is about our mission, not our tax structure,” Dulski says. “We are a ‘B-corporation,’ which is a company for social good.” Its investors—to the tune of $50 million—include such bold-faced names as Richard Branson, Bill Gates, and Arianna Huffington.

At change.org’s offices, located down the street from the famed Anchor Brewing Company in San Francisco’s Potrero Hill neighborhood, there’s a feature called the Values Wall. Polaroids of the staff surround the company’s seven operating principles—they include “We think big,” “We embrace openness,” and “We serve with passion”—which Dulski helped craft after her arrival in January 2013. In her modest office, two framed pictures embody her own essential tenets: be optimistic, and don’t be afraid to fail. One is a drawing noting that since a half-filled glass actually comprises both water and air, “technically, the glass is always full.” Another depicts one of Dulski’s favorite movie scenes; it’s from Meet the Robinsons, a 2007 Disney film about a time-traveling scientist. “He invents a gun that sprays peanut butter and jelly onto a sandwich, and he demonstrates it and it goes everywhere; his whole family is covered in PB&J, and there’s this horrible, painful pause. But then they all break into applause and say, ‘You failed! You failed! It’s amazing!’ ” Dulski says, her voice rising to mimic a cheer. “The whole point is to keep moving forward.” And in fact, she notes, change.org staffers are encouraged to highlight their unsuccessful ideas at a regular event known as the Festival of Failure. “The idea is, if you’re going to fail, make a big deal out of it. Celebrate it, so other people can learn from what you did. Because if all you do is say, ‘I failed and I don’t want to tell anyone,’ then nobody learns.”

As Dulski describes it, her personal history was the ideal training ground for her current job. From childhood, she got life lessons from her dad (Robert Huret ’65, a venture capitalist) such as, “Never apologize at the beginning of a sentence” and the pithy-but-effective “Don’t work with jerks.” Her mother was also a strong role model: she became a management consultant after earning an MBA at night while juggling two kids and a full-time job in speech pathology. In Sunday school, Dulski was a teacher’s assistant; as a teen, she taught English as a Second Language and volunteered with a nonprofit that helps prepare underserved students for college. “I’ve pretty much been a teacher-slash-coach ever since I was a kid,” Dulski observes. “My whole life has been about empowering other people to be their best.”

At Cornell, Dulski majored in psychology, marched against apartheid, and spent two years as a research assistant in Aegean dendrochronology, a field that uses tree rings to date ancient archeological sites. She also joined the fire department in Cayuga Heights, the village adjacent to North Campus. At five feet tall, she recalls, “I was smaller than anyone else who had ever joined, and they had to order custom boots for me. So that was my claim to fame—that I had to get the smallest pair of boots.” The fire-fighting gig was part of a conscious effort to get out of her comfort zone; another was spending her junior fall studying rainforest ecology in the Brazilian Amazon, a destination she chose after mining the study abroad catalogues for the most challenging program she could find. She learned Portuguese from scratch, slept in a hammock, had no electricity or plumbing, and foraged for food. Oh, and there were snakes. And tarantulas. “My theory was that I had this unique opportunity at Cornell to push myself in different directions and try different things,” Dulski says. “I had this mantra: ‘If I can do this, I can do anything.’ “

After graduation, she taught high school and founded an educational nonprofit’s Pittsburgh branch. It was the mid-Nineties—the Internet’s infancy—and she still remembers the day that a colleague told her about a website called yahoo.com. “She actually wrote it for me on a Post-It note and stuck it to my computer,” Dulski recalls. “I started using it, and I just fell in love with the idea that the Internet could bring impact to people at scale.” She decided an MBA would help her launch a career in Silicon Valley, so she came back to the Hill, where she and her husband (Leonard Dulski, MBA ’99) both enrolled in the Johnson School. She went on to spend eight years at Yahoo in marketing and management, then founded a startup—Dealmap, a shopping-discount aggregator—that was acquired by Google in 2011. She worked in product management at Google for a year and a half before moving to change.org—an organization whose mission she describes as “exactly what I have been looking for the whole time.”

The mother of two teenage daughters, Dulski eschews the term “work-life balance.” Instead, she calls it a “work-life mash-up.” “I don’t feel like trying to find a balance is a reasonable thing,” she explains. “I do the best I can. I’ve learned over the years that the guilt I feel is within my control—so I choose to feel less. None of us can be perfect. There are times when I’m at work and I wish I could be home, and there are times when I’m at home and wish I could be at work. I don’t beat myself up over it, because that adds no value to anybody.” Dulski doesn’t bristle at queries about how she juggles work and family, though she has fielded them more times than she can count. “I am not actually offended by that question,” she says, “because people genuinely want to know what works.” But she has less patience about being boxed into the category of “women in tech” at panel discussions and on who’s-who lists. “It creates an excuse to not put women in other places where they should be,” Dulski observes. “It’s convenient at every conference just to have a ‘women in tech’ panel, and you can put the women there. We’ll know we’ve made it when we stop having lists and panels just for women. That’s the thing I’m working to change.”