With sixty-four fraternity and sorority chapters involving nearly a third of our undergraduates, Cornell has one of the largest Greek systems in the country. Countless alumni have benefited from the professional contacts, the lifelong friendships, and the experiences in leadership, philanthropy, and service they gained as members of a fraternity or sorority. Unfortunately, some have also been harmed, physically or mentally, by the hazing they endured as part of the member recruitment and education process.

During the past ten years, nearly 60 percent of Cornell fraternity and sorority chapters have been found responsible for activities that are considered hazing under the Campus Code of Conduct. As recently as this winter, we imposed sanctions on four fraternity chapters for recent violations, including hazing. 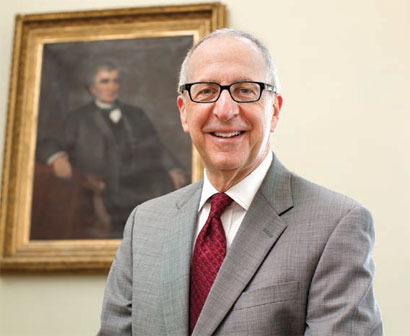 Hazing is not exclusively a Greek problem. It has happened to members of Cornell athletic teams, military training programs, performance groups, and other student organizations. And it occurs in places and situations far beyond our university—from high school clubs to the workplace.

Fortunately, our Greek chapters, in partnership with their alumni, national or international organizations, and Cornell faculty, staff, students, and administrators, are leading the way in setting the stage to remove hazing from the culture of Cornell. In August 2011, following the death of a student in a pledging-related incident that involved alcohol and hazing, I directed our fraternities and sororities to “end pledging as we know it.” A student-alumni task force, dubbed RARE (Recruitment, Acceptance, Retention, and Education), studied the issue for more than a year, and, acting on their recommendations and those from our Fraternity and Sorority Advisory Council, we have begun to implement a new system of member recruitment and education across the Greek system.

Under the policies now in effect, fraternities and sororities must remove the “power differential” between members and initiates, which often leads to coercive behavior during the initiate process, and instead construct a “membership development” model that focuses on the organization’s core principles and that extends from the intake period through graduation.

In advance of recruitment at the beginning of the semester, Greek organizations were required to secure approval for orientation events from Cornell, their alumni, and their national or international organization; all complied. The new-member orientation period was shortened to a maximum of six weeks this year to reduce distraction from academic work; beginning next year, it will be reduced to four weeks.

Chapters that do not follow the rules are being held accountable, and we are moving forward with plans to post information about infractions by all student groups on the Web so that potential new members and their families can make better decisions about whether to join. Additional changes are being considered, including live-in advisers in all chapter houses; standardized training for live-in, chapter, and alumni advisers; and the establishment of consistent academic standards for the Greek system.

A critical component of our new system is alumni involvement—through the various Greek alumni councils and through greater participation in the A. D. White Greek Leadership Summit and other events for alumni volunteers. And alumni are stepping up to the challenge. Dan Meyer ’87, president of the Cornell Alumni Interfraternity Council, wrote recently in the Daily Sun: “Hazing, which has existed at our Alma Mater for well over a century, is on the decline. Its practice has varied; its prevalence has shifted between affinities. Remnants linger. Our goal is to end what remains of hazing, and keep it off the Hill.”

This spring, alumni of the Cornell chapter of Pi Kappa Alpha (PIKE), in partnership with the fraternity’s national organization, are beginning efforts to recolonize, after losing University recognition in 2010 because of a history of alcohol and hazing infractions. Alumni leaders have submitted a plan for new member recruitment and orientation for all members when the house reopens in fall 2014. PIKE is providing a model for how alumni can help transform Greek life at Cornell.

With your continued involvement, I believe Cornell’s Greek system can set the standard nationally and internationally for creating strong, lifelong bonds among members and promoting positive values among fraternity and sorority members—without hazing.