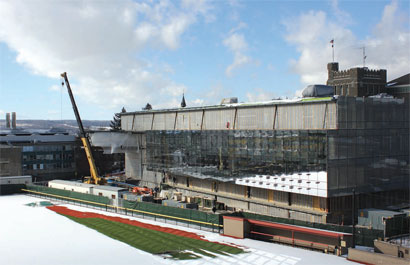 Construction zone: Gates Hall is rising at the corner of Hoy and Campus roads, adjacent to the baseball field. The future home of computing and information science is expected to be completed in December; to follow its progress, go to blogs.cornell.edu/gateshall.Lisa Banlaki Frank

In late January, Cornell Tech welcomed its first class of students—eight people pursuing a one-year master of engineering degree in computer science. As the design process continues on its permanent home on Roosevelt Island, set to open in 2017, the program is holding classes in space donated by Google in Manhattan’s Chelsea neighborhood. Eventually, Cornell Tech’s academic offerings will expand to include graduate degrees in electrical and computer engineering, information science, and operations research, as well as a tech-oriented one-year MBA and a master of science in partnership with the Technion–Israel Institute of Technology. Says Dean Dan Huttenlocher of the inaugural class: “This group has the entrepreneurial spirit and technical talent to go out and make a difference in the world.”

President David Skorton has been named to the steering committee of Partners for a New Beginning (PNB), a nonprofit, nonpartisan initiative that fosters renewed engagement with communities in the Middle East, North Africa, and South Asia. Co-founded by former Secretary of State Hillary Clinton in collaboration with the CEOs of Coca-Cola and the Aspen Institute, the group aims to build public-private partnerships that promote education, economic opportunity, scientific and technological advances, and more. Former Secretary of State Madeleine Albright, chair of PNB, calls Skorton “a leading voice on educational diversity, academic and business partnerships, international outreach, and immigration reform” and praises him for his “broad experience, thoughtfulness, and energy.”

A former Cornell administrator who played a key role in the 1969 Straight Takeover died in January at age eighty-five. As the University’s vice president for public affairs, Steven Muller, PhD ’58, helped negotiate a peaceful withdrawal of armed protesters from the Straight. A professor of government, he later helped found Cornell’s Einaudi Center for International Studies and went on to serve as president of Johns Hopkins University for eighteen years. “He was very collegial,” recalls government professor Ted Lowi, “and had that quality of being able to engage people to help them see others’ perspectives.” Muller’s family fled Germany during World War II; after immigrating to the U.S. he worked as a film actor in Los Angeles, earned an undergrad degree from UCLA, and won a Rhodes Scholarship to study at Oxford.

Collegetown’s Last ‘Hangout Bar’ to Go Up for Sale 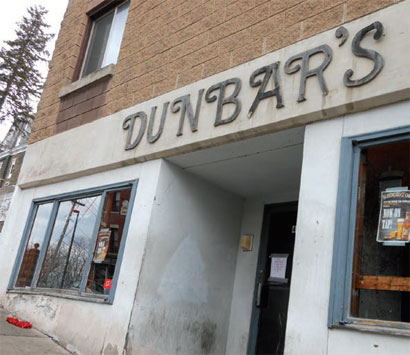 Another Collegetown watering hole may be in danger of going the way of the late, great Johnny’s Big Red Grill. In the wake of the closures of the Royal Palm Tavern, Dino’s, and Johnny O’s, the owner of Dunbar’s announced that he’s putting it up for sale after the end of the spring semester. As reported in the Daily Sun, Dave Peppin plans to leave the bar business after thirty-three years. As he told the Sun, Peppin hopes that as “the only hangout bar left” in Collegetown, the establishment will stay open under new ownership. Dunbar’s twice hosted the Stanley Cup trophy when alumni hockey pros brought it to campus during its traditional victory tour, and the bar’s graffiti-covered walls have played home to countless late-night revelers.

Jerry Hass, who taught Cornell MBA students for nearly half a century, died unexpectedly in January. He was seventy-two. Even after retiring with emeritus status in 2008, Hass continued to teach at the Johnson School; he was scheduled to lead a finance course this semester. Hass was a nationally recognized expert in a variety of fields including corporate finance, energy and regulatory economics, applied microeconomics, security analysis and investment management, and business strategy. His publications include An Introduction to Managerial Finance, the seminal text on the subject. He is survived by his wife, Jo, five children, and ten grandchildren. 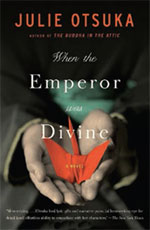 Julie Otsuka’s novel When the Emperor Was Divine has been selected for next year’s New Student Reading Project. The 2003 work—which will be read by freshmen, transfers, and others in the Cornell community—describes a Japanese-American family’s experience in World War II internment camps. The novel will be the subject of class discussions and campus forums exploring a range of topics including immigration, exile, scapegoating, trauma and memory, civil liberties and human rights, the post-9/11 experiences of Muslims and Arab Americans, and more. 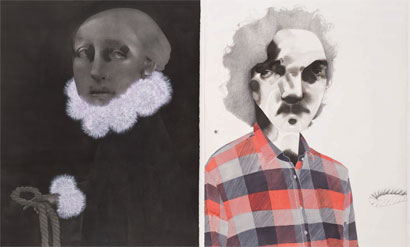 One-man show: Rope (After Schjerfbeck), a 2008 diptych (ink, gouache, colored pencil, and charcoal on paper) by Storm Tharp ’92, is on display at the Johnson Museum through early April. Tharp is the youngest alumnus to have a monographic show of his work at the museum; according to the exhibit description, “he has become widely known for enigmatic portraits that investigate the performance of identity and abstraction.”

This year, the annual Cornell Alumni Leadership Conference (CALC) moved to Boston, where Cornellians gathered at the Marriott Copley Place in January to attend sessions on volunteering, learn from each other, honor their colleagues, and celebrate the University. Nearly 800 alumni were on hand, down from last year’s attendance of almost 1,000 in Washington, D.C., but there was no decline in enthusiasm. Robert Persons ’48—a longtime class correspondent—was feted as this year’s recipient of the William “Bill” Vannemann ’31 Outstanding Class Leader Award, and the Class of 2002 took home the prize as the winners of the first Cornell Alumni Association Cup. Alumni-elected trustee Sheryl Hilliard Tucker ’78 introduced a Friday evening panel that addressed the subject of “Health Care Today, Implications for Tomorrow,” and President David Skorton addressed the attendees at the Saturday luncheon. CALC will be held in Boston again next year from January 17 to 19. 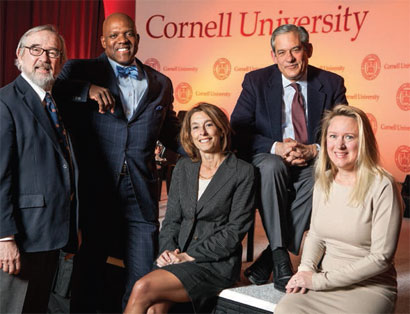