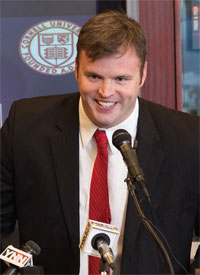 Top job: For the first time since 1997, Cornell has an alumnus at the helm of its football program. In January, David Archer ’05 was named head coach, becoming the youngest Division I head coach in the country. Archer spent the last six seasons as a Cornell assistant, most recently serving as recruiting coordinator and tight ends and fullbacks coach under Kent Austin, who left after three years to become general manager and head coach of the Hamilton Tiger-Cats in the Canadian Football League. As a player, Archer was a three-year starter on the offensive line and served as a captain his senior year, when he won the team’s Enzo Montemurro ’85 Award for spirit and leadership and Jaime McManamon ’07 Award for hard work and diligence in strength and conditioning.

HISTORIC TITLE With a 29-12 win over Columbia on February 2, the Big Red wrestling team secured its 11th straight Ivy League championship—the longest current title streak by any Ivy squad in any sport. At press time, the team’s record was 11-3, with convincing wins over all its Ivy opponents and a Number 7 national ranking. Once again, senior co-captain Kyle Dake is leading the way, with 13 straight victories so far this year. Dake is seeking to become the first wrestler to win NCAA championships in each of four weight classes.

LEGENDARY LEADER Women’s basketball head coach Dayna Smith has been honored by the Atlantic 10 Conference for her playing career at the University of Rhode Island. Smith was one of 16 women named to the inaugural Women’s Basketball Legends list for their contributions to their school’s basketball program. Smith was one of only 11 players in Division I history to collect more than 1,000 points and 750 assists and helped lead URI to the 1996 NCAA tournament. She has been head coach at Cornell since 2002 and led the team to its only Ivy League title in 2008.

UP AND DOWN Forward Cole Bardreau ’15 earned a gold medal as a member of the United States team at the International Ice Hockey Federation World Junior Championships in Russia. Bardreau, a native of Fairport, New York, played in all seven games for the U.S., collecting a goal and two assists while anchoring a line that didn’t allow a single even-strength goal and serving on the top penalty-killing unit. Unfortunately, shortly after returning to the Big Red in January, Bardreau suffered a season-ending neck injury in a game against RPI.

LAX PICKS Two men’s lacrosse players were selected in the Major League Lacrosse Collegiate Draft in January. Jason Noble ’13 was the 10th pick overall, going to the Hamilton Nationals in the second round, and Max Van Bourgondien ’13 was taken 43rd overall as a sixth-round pick of the Charlotte Hounds. The MLL, which starts its season at the end of April, holds its draft before the start of the college season so graduating seniors can immediately join their MLL teams at the end of their collegiate season.

MOST WINS With a 4-0 win over Mercyhurst at Lynah Rink, Doug Derraugh ’91 became the winningest women’s hockey coach in Cornell history, with 136 victories. Bill Duthie ’71, the program’s original coach from 1972 to 1984, held the old record. Now in his eighth season at Cornell, Derraugh was named the national coach of the year in 2010 after leading the Big Red to the first of three straight trips to the Frozen Four.

A Bear for All Seasons

Three alumni have launched a campaign to create a permanent memorial to honor Touchdown the Bear, Cornell’s first mascot. With seed funding from John Foote ’74 (author of Touchdown: The Story of the Cornell Bear), Joseph Thanhauser ’71, and Alon Mass ’08, a bronze bear cub statue has been commissioned to honor the four black bears that served as mascots in the early twentieth century. With a goal of $250,000, the campaign aims to place and maintain the statue at the corner of Campus Road and Garden Avenue, in front of Teagle Hall. If all goes well, the Touchdown statue will be unveiled at Homecoming in 2015 as part of the sesquicentennial celebration. To learn more and/or make an online gift to support the campaign, go to alumni.cornell.edu/touchdown.