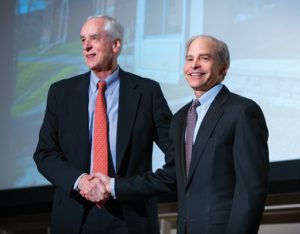 INVESTING IN THE FUTURE: Rawlings (left) with Fisk Johnson ’79 at a celebration of the Johnson family’s $150 million naming gift for the College of Business.

With this final column, I look forward to retiring—for the third time—from the best job in the world. Elizabeth and I have many friends on the Cornell faculty and staff and within the worldwide alumni body, and it has been a great pleasure to spend time with many of them over the past year.

A highlight for me has been meeting with members of Cornell’s extraordinary faculty in their offices and in small groups. These discussions have provided a welcome respite from the administrative pressures of the presidency, and I have looked forward to them with great anticipation. It has been enormously fulfilling to engage with intelligent and thoughtful professors across a wide swath of disciplines who are united by a commitment to learning about the world and about who we are. Cornell has a greater range of inquiry than any other research university, so this is the place to be for the life of the mind.

This interim year has also allowed me to renew my acquaintance with Fisk Johnson ’79, MEng ’80, MS ’82, MBA ’84, PhD ’86, his family, and SC Johnson, the fifth-generation family company he leads, and to work with them on an extraordinary $150 million gift to name the Cornell SC Johnson College of Business. The gift, which honors the Johnson tradition of enlightened business practices and devotion to Cornell, is a tremendous vote of confidence in our new business college. Its goal is to elevate the college overall while also strengthening its three superb and distinctive schools—the Charles H. Dyson School of Applied Economics and Management, the School of Hotel Administration, and the Samuel Curtis Johnson Graduate School of Management.

Extending a strategy used to good effect at Cornell by Chuck Feeney ’56 and others, the first $50 million of the Johnson pledge is a challenge to inspire others to give to the college’s endowment. It will match endowment gifts on a one-to-three basis, allowing the college to raise an additional $150 million in endowment, beyond the $100 million for endowment that the Johnson gift provides. Several alumni already have expressed interest in the challenge, including John Dyson ’65, an enthusiastic supporter of the new college as well as of the Dyson School, who plans to use the challenge to name a new professorship in honor of his late brother, Peter, who was a wonderful friend of Cornell in his own right.

The Johnson gift includes support for the SC Johnson Scholars program for undergraduates in the Dyson and Hotel schools. In addition to providing need-based financial aid for a cohort of eligible undergraduates, the program will enable them to pursue opportunities that enhance their general coursework and to receive active and ongoing mentoring from SC Johnson executives.

As I near the end of my “three-peat” as president, I am more convinced than ever of Cornell’s intrinsic strengths. Dean Gretchen Ritter ’83 and the Arts and Sciences faculty are making excellent progress on recasting and revitalizing their undergraduate curriculum to provide a comprehensive liberal education that will benefit undergraduates across the university. Cornell Tech will move to its Roosevelt Island campus this summer, enlarging the university’s footprint in New York City and opening new possibilities for collaborations across all of Cornell’s New York State campuses.

Our students just keep getting better. Our newest Rhodes Scholar, Ahmed Ahmed ’17, for example, is a biological sciences major who aspires to be a physician-scientist. I have gotten to know Ahmed this year, and he has a remarkable story. He was born to Somali parents in a refugee camp in Kenya and came to the U.S. when he was a year old. For most of his life, he was raised by a single mom who worked hard for modest income. Yet he has been able to take full advantage of what Cornell offers. He works as a research assistant in Professor Geoff Coates’s chemistry lab. He also volunteers in the community and mentors under-represented students at Cornell. Because of the need-based financial aid he receives, he has been able to focus on the good he wants to do in the world.

And President-elect Martha Pollack, an innovative scholar and accomplished administrator, is exactly the right person to make Cornell a university for all New Yorkers and for the world—even more than it already is. Elizabeth and I are looking forward to retirement when Martha and her husband, Ken Gottschlich, come on board on April 17, but Cornell will remain forever a part of us. Thanks to all of you for your friendship and for your great loyalty to Cornell.